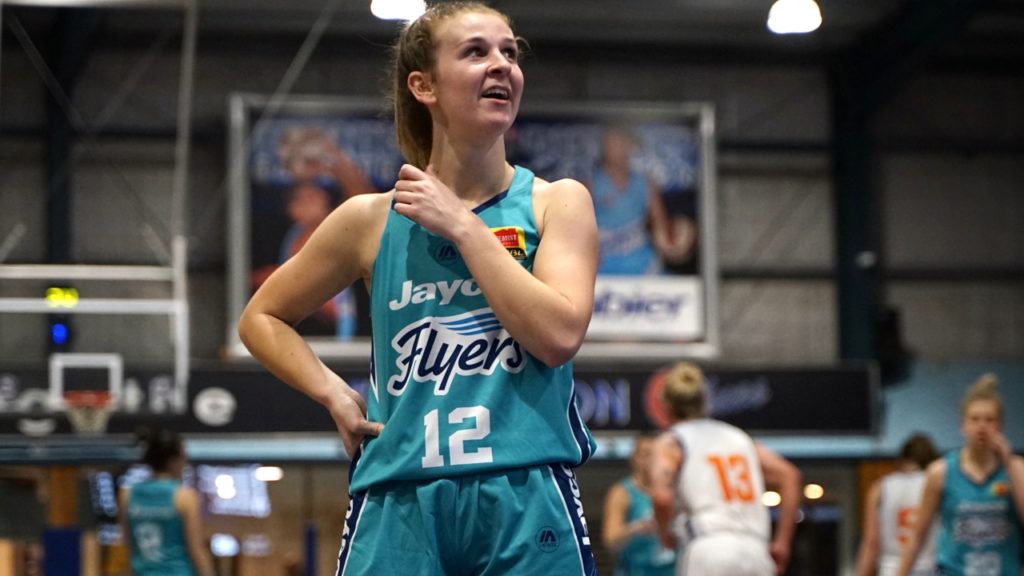 AFTER a weekend off with many players stepping up to Australian Opals’ duties, the Women’s National Basketball League (WNBL) is back with Round 6 tipping off on Friday night. The Melbourne Boomers and Perth Lynx play two games across the weekend to try and break up the mid-table gap between fourth and fifth.

In one of two games to open Round 6 of the WNBL, Adelaide Lightning hosts Melbourne Boomers for the first time in the 2019/20 season. The top four clash could have big ramifications for both the winner and loser, with the winner to take outright third and keep in touch with the top two, while the loser will slip at least a game behind third and possibly two games behind the top two, while remaining only a game ahead of the ensuring bottom four sides. The last time these sides played was in January this year which saw the Boomers get the points in Adelaide, the third time they had won during the season after narrow wins in Melbourne in the two previous encounters. The Lightning won their last contest and will head in with the form compared to the Boomers who after winning four consecutive games, have suffered back-to-back losses. The interesting fact within the game is Adelaide is yet to lose at home from two matches, while Melbourne is yet to suffer a defeat on the road from the same amount of games.

Brianna Turner has been a key player for the Lightning this season, averaging 17.3 points, 9.3 rebounds, 1.5 assists, 1.5 blocks and 1.2 steals, while working well in tandem with Lauren Nicholson (17.0 points, 2.7 rebounds, 2.0 assists and 1.5 steals). Stephanie Talbot is also enjoying a purple patch of form, sinking 14.3 points, 6.8 rebounds, 4.0 assists and 1.8 steals in season 2019/20. For the Boomers, Lindsay Allen has been the key player with 18.3 points, 3.5 rebounds and 6.0 assists per game, while Cayla George is averaging a double double from her six matches, thanks to 16.0 points and 10.2 rebounds per game. Madeleine Garrick is an underrated player on the Boomers side, comfortable across most areas with a 10.2-point, 3.0-rebound, 2.7-assist and 1.2-steal average.

Adelaide is in good form so will head in as favourites, but Melbourne are due to bounce back so it will be an incredibly tight contest.

It is still early days in the season, but both Sydney Uni and Perth would realise the importance of getting a ‘W’ in this clash. After making the finals last year, Perth sits fifth, two wins outside the top four and having only won two games from six starts. Both of those were at home which is all the more important for them to break their road trip record with a win here. For Sydney Uni, they just need a win, sitting with a far worse points difference than Perth (-69 to +11), and having lost an extra game with two wins from seven starts. Both their wins have come at home so that is a positive for the Flames, though the fact they lost to this Lynx outfit in the last start is less positive. A win would see the Flames propel themselves into fifth temporarily, and at least move within a game of fourth spot.

Alice Kunek (17.9 points, 4.1 rebounds and 3.9 assists) and Colleen Planeta (14.9 points, 7.1 rebounds and 1.1 blocks) have been the two staples in the Flames’ outfit week-in, week-out, while Tahlia Tupaea (10.1 points, 3.1 rebounds, 2.9 assists and 1.3 steals) has also started in all seven games. Jessica Kuster is one who has stepped up throughout the season, with the 188cm forward sinking 10.4 points and 5.9 rebounds, as well as a block per game. For Perth, Alison Schwagmeyer has been enormous all season, pumping out 17.8 points and 7.2 rebounds per game, only bettered in that department by Imani McGee-Stafford (14.7 points, 8.7 rebounds and 2.3 blocks). Katie-Rae Ebzery has also been a phenomenal passer this year, averaging 7.5 assists and 4.2 rebounds to go with her 16.0 points and 1.5 steals.

Perth Lynx should breakthrough for their first on the road win, but the Flames could make a statement with a win here.

Sitting at polar ends of the WNBL ladder, the panic button would have been pressed for the Fire who have just one win from six attempts, while the Flyers are in the opposite position with just one loss from seven games. There will still be fire in the belly from the visiting side however, with the Flyers going down to UC Capitals by 19 points in Round 5 to reduce their stranglehold at the top of the table to just one game. The Flyers are unbeaten from two tries on the road, while the Fire are yet to win in front of their home fans. There is no better occasion to celebrate their first win in front of a passionate crowd than downing one of the title contenders. It will be far from easy though and the Flyers will be keen to atone for last round and hit the court with a bang. These sides last played back in Round 1, with Southside coming out nine-point winners at Dandenong.

Abby Bishop has been a real star for the Fire, posting up 20.2 points, 8.6 rebounds, 3.5 assists and 2.2 steals per game, the clear standout for the side in an otherwise disappointing start to the year. The issue has been consistency, with Tess Madgen (12.8 points, 5.8 rebounds and 3.5 assists), Darcee Garbin (12.0 points, 6.5 rebounds and 1.7 steals) and Bridget Carleton (11.2 points, 4.8 rebounds) all contributing. The Flyers on the other hand have had the same five starters every week, and allowed all bar two players to take the court in each of the seven games. Mercedes Russell has been the recruit of the off-season, with the 198cm center posting 15.6 points and 10.3 rebounds per game, complimenting the likes of Leilani Mitchell (15.9 points, 3.7 rebounds, 6.3 assists and 1.6 steals) and Rebecca Cole (14.9 points, 3.0 rebounds, 3.4 assists and 1.6 steals) perfectly.

It is hard to look past the ladder leaders in this game with Southside predicted to add another win to the tally, but as the Fire showed in Round 1, they can be competitive in most games.

Bendigo Spirit return from a long break at home against Melbourne Boomers who are coming off their second game for the round. Returning from no doubt a thrilling clash in Adelaide, the Boomers will be pumped up for the clash, but might also be sore compared to the fresh Spirit. A strong start is crucial for the home side given they might have the legs to outrun them in the end, though the Boomers are third for a reason and will be difficult to topple. If the Boomers go down to Adelaide it will be three consecutive losses, while the Spirit also enter the game with back-to-back losses and will be keen for a victory. Considering Bendigo is 2-1 at home it may be a great opportunity to get a victory, but Melbourne are unbeaten on the road prior to this round. The last time these sides faced was in Round 2, with an earlier clash in Round 1 – both of which were won by the Boomers. A third meeting in seven rounds will end their head-to-head fixturing for the season and Bendigo will be desperate to get a win back on their metropolitan counterparts.

Kelly Wilson (11.1 points, 3.1 rebounds and 6.4 assists) and Carley Ernst (10.7 points, 8.0 rebounds) have been the two key players in the Spirit line-up, though Marte Grays has been a welcome inclusion to the side with 10.0 points and 5.6 rebounds. Tessa Lavey has also proven to be a key playmaker in the front court with 4.3 assists to go with her 9.4 points and 3.4 rebounds per game. While the Boomers have slipped up in the past two matches, they remain a strong side across the board, with Allen, George and Garrick just three of their strong contributors. Sophie Cunningham (12.0 points, 4.3 rebounds and 2.8 assists) and Ezi Magbegor (10.7 points, 4.3 rebounds and 1.3 blocks) are two others averaging double-figure points this season.

Melbourne should take home the win here, though Bendigo knows how important this victory is in the context of its season.

The final game of the round will have equally as important ramifications on the season with the second placed University of Canberra (UC) Capitals hosting Perth Lynx at the National Convention Centre on Sunday evening. The Capitals will have the longest wait of any side in the competition having not played since November 9 and will have a 15-day gap between matches, while the Lynx will be coming off a Friday night clash against Sydney Uni Flames. Mathematically if the Lynx can win both games, they are back in contention with the top four sides and adding a bit of points difference would not go astray either. But for the Capitals, coming off a fresh win over Southside Flyers, the reigning premiers will be keen to keep the streak going and add to their three-straight wins of late. Yet to lose at home they will be difficult to beat, while the Lynx are yet to win on the road and will be keen to take home a pair of victories when they travel to NSW/ACT this round.

The reigning premiers have a multitude of stars across the court with Kia Nurse (20.3 points, 3.3 rebounds and 2.6 assists) the scoring machine working well once again with Kelsey Griffin (16.9 points, 11.3 rebounds, 3.0 assists and 2.6 steals). Keely Froling has been a strong performer this season putting up numbers of 16.1 points, 7.1 rebounds and 1.6 assists, while Olivia Epoupa (8.9 points, 6.3 rebounds, 6.4 assists and 4.0 steals) has been a huge addition to the already impressive outfit. For the Lynx, much has been spoken about the regular starters, but Ariel Atkins has been important since landing in Australia, playing two games off the bench for an average of 13.5 points, 5.0 rebounds and 3.0 assists, while Lauren Mansfield has also showed her clean hands with 9.8 points, 3.3 rebounds, 5.3 assists and 1.8 steals.

The Capitals are strong favourites and hard to beat at home so it will be difficult to see them losing, but the Lynx will hope that they bring form throughout the weekend and stage a massive upset.