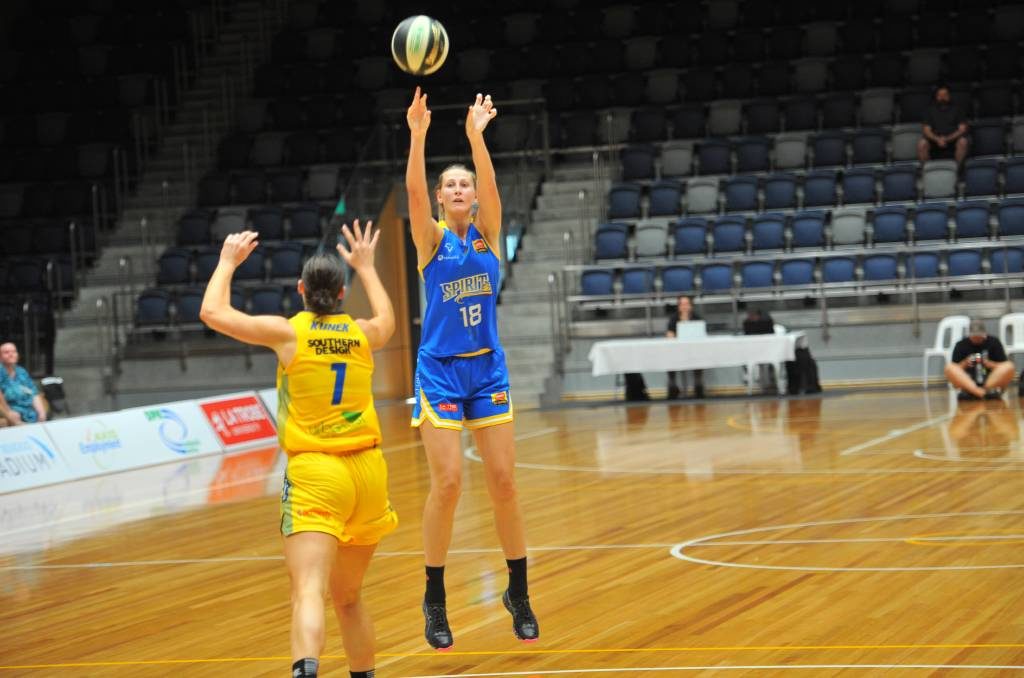 IN the final Women’s National Basketball League (WNBL) round prior to Christmas, there is plenty at stake for sides, with some last chances to stay in touch with the top four, and the opportunity for top sides to gain a vital advantage over title contenders heading into the new year.

In a standalone game in Bendigo on Thursday night, two bottom three sides battle it out in what could well be the last chance for these sides to remain in contention for a finals spot. The Spirit will travel up to Canberra the next day to take on the Capitals on Saturday, but will be keen to break their seven-game losing streak with a victory over Sydney Uni Flames. For the Flames, it will be about bouncing back from the disappointing loss to Townsville that resulted in the Flames slipping to sixth on the ladder. Now two and a half games from fourth, the Flames really need to win this one against the last placed side. In their one previous matchup this season, Sydney Uni got up in Bendigo by five points back on November 29. The Spirit hold a 2-4 record at home, while the Flames are only 1-6 when on the road. Bendigo has an even team across the board, with Carley Ernst having a big game last round, and now averaging 10.2 points and 6.2 rebounds, while Demi Skinner has shown she can come off the bench or play a role in the starting team, averaging 10.5 points and 3.2 rebounds this season. An important player who has been building nicely is Rebecca Tobin, with the forward-centre averaging a double-double of 8.3 points and 10.2 rebounds per game. For the Flames, Alice Kunek has been a scoring machine this season, averaging 17.2 points, 4.2 rebounds and 3.3 assists per game. American duo, Colleen Planeta (15.5 points, 7.2 rebounds) and Jessica Kuster (12.2 points, 6.6 rebounds) have both been prominent on the attack and off the boards for Sydney Uni. Bendigo has its best chance to win in some time, but Sydney Uni’s only win on the road came in Bendigo, so the Flames will be feeling confident.

Coming off the game against Sydney Uni, Bendigo heads to the nation’s capital to face the University of Canberra (UC) Capitals on Saturday evening. In the side’s only other clash this year back in Round 8, the Capitals got up comfortably by 25 points, 91-66. At home, the Capitals are near-unbeatable, losing their first game to ladder leaders, Southside Flyers last round and will be hungry to bounce back and add another win to their current 5-1 home record, the second best of any side this season. The Spirit are yet to win on the road, which does not bode well for the side, with Bendigo needing a massive effort to try and topple the reigning champions in this game. Some Bendigo players that will need to assist those who have been strong this season are guards Tessa Lavey (9.8 points, 3.4 rebounds and 4.3 assists) and Kelly Wilson (9.4 points, 3.7 rebounds and 6.3 assists), while American import, Marte Grays (6.8 points, 4.1 rebounds) is another one to keep an eye on. The Capitals have no shortage of talent on the roster, with the scoring machine in Kia Nurse (20.8 points, 3.6 rebounds and 2.7 assists) leading the way. The 2018/19 WNBL Most Valuable Player (MVP), Kelsey Griffin had a quiet game last round with just four points, but is averaging a double-double of 16.6 points and 11.4 rebounds per game. Keely Froling has enjoyed a mix of starting and coming off the bench this season, with 12.9 points and 6.5 rebounds, while Marianna Tolo has been one of the top centers this season, posting up 10.8 points and 6.2 rebounds from 10 games. The UC Capitals will head into the game as heavy favourites and one can only expect they come out on top in this one, especially with what is on the line. However, if Bendigo do not collect a win this round, a line can be put through the Spirit’s finals chances.

Heading north on Saturday night, Townsville Fire hosts Perth Lynx in a battle of two sides that grabbed relieving wins on the weekend just gone. Townsville got up over Sydney Uni, while Perth took down Melbourne Boomers. Now travelling to the other side of the country, the Lynx will hope to reverse the result from earlier in the season, when Townsville flew home with the points in a 93-88 win in Perth. At home, Townsville is two wins from five encounters, but Perth has proven to be even more shaky on the road with a 1-5 away record thus far this season. A win for Perth would see the Lynx move to within one and a half games of fourth spot, while a loss for Townsville would seemingly all but rule the Fire out of the finals race. A win however, and the Fire would draw level with Perth and only be points difference away from that fifth spot. Despite a quiet weekend last weekend, Abby Bishop has been the key player for the Fire, averaging 16.3 points, 7.3 rebounds, 3.3 assists and 2.3 steals per game. A couple of forwards who have really hit their straps over the past month are Darcee Garbin (14.3 points, 6.3 rebounds) and Bridget Carleton (11.5 points, 6.2 rebounds and 3.7 assists). Add in Tess Madgen (11.5 points, 6.2 rebounds and 3.7 assists) and the Fire have an underrated quartet of scorers. The Lynx also have an even spread across the board with some great depth on offer, but have been unlucky with many games just not falling their way. Alison Schwagmeyer continues to impress off the boards with 16.8 points and 6.6 rebounds per game, while Katie-Rae Ebzery is strong across all areas with 14.7 points, 4.2 rebounds, 4.9 assists and 1.3 steals per game. Imani McGee-Stafford failed to score last round, but put up double-digit rebounds, and has averaged 9.5 rebounds per game to accompany her 11.5 points. Lauren Mansfield is the other player flying under the radar, averaging 10.2 points, 3.1 rebounds and 4.6 assists per game. Perth will start favourites, but this game will go down to the wire.

After a game in Bendigo on Thursday night, Sydney Uni turns its attention to the ladder leaders and red-hot Southside Flyers who have only dropped one game in seven at home. The Flyers are yet to lose to anyone outside of the UC Capitals, and they even sought revenge on that debt owed with a win over the Capitals last weekend. The Flames on the other hand remain to look shaky, with last year’s wooden spooners having made noticeable improvement, but are still an outside chance of finals, needing to win at least one game this weekend to remain in the finals race realistically. Victory, and a loss to Adelaide Lightning the next day would move the Flames to within half a game of fourth spot, but a loss – or even worse two losses – and a win to the Lightning could see them drop back to a massive four and a half games behind. The Flyers have had a remarkable season, their first since the rebranding of the Dandenong Rangers. Mercedes Russell has been an overwhelming success, as the American import continues to dominate in center with 16.1 points and 9.9 rebounds per game. Rebecca Cole has proven to be a reliable scorer week-in, week-out averaging 16.0 points, 2.9 rebounds, 3.5 assists and 1.4 steals per game, while Sara Blicavs has averaged 6.5 rebounds to go with her 13.8 points. Add in Jenna O’Hea (14.4 points, 4.7 rebounds, 4.6 assists and 1.6 steals) and Leilani Mitchell (15.4 points, 3.8 rebounds, 5.7 assists and 1.3 steals), and the Flyers have an impeccable starting five. Every player in the starting side averages at least a steal per game, showing their willingness to run both ways and remain alert throughout the contest. For the Flames, they do have those impressive numbers from the likes of Planeta, Kuster and Kunek, while Alex Wilson (12.3 points, 3.4 rebounds and 4.5 assists) is another player continuing to play her role throughout the season. Forward-center, Lauren Scherf (6.4 points, 8.0 rebounds and 2.5 assists) is one who always causes headaches around the defensive boards. Southside Flyers will head in as strong favourites in this one, with the Flames’ task made all the more difficult by being on the road.

In the final game prior to Christmas, Melbourne Boomers will be keen for an early present with a victory over fourth placed Adelaide Lightning. After a loss on the road to Perth Lynx last weekend, Melbourne could maintain second spot with a victory here, though a loss would see them likely drop to third with the UC Capitals facing the bottom side in Bendigo Spirit. The stakes are just as high for Adelaide, a side that has been in some good form over November, sitting fourth, but almost on its own with two games adrift of the Capitals in third, and two and a half games clear of Perth in fifth. A win, and the Lightning ease the pressure on the chasing teams, as well as add pressure on the top three sides, but a loss would hurl them back to the mid-table logjam. At home, Melbourne is 4-2, while the Lightning is 2-3 on the road this season. The last time these side met, Melbourne got the win in South Australia by 14 points back on November 22. Cayla George has been instrumental for the Boomers this season, rarely playing a bad game and posting up 14.0 points, 9.3 rebounds, 3.9 assists, 1.5 steals and 1.6 blocks per game. George and her partner-in-crime in the blocks department, Ezi Magbegor (11.1 points, 5.3 rebounds and 1.2 blocks) deny the opposition scoring chances close to the basket. Lindsay Allen (15.9 points, 3.2 rebounds, 5.3 assists and 1.2 steals per game) is the leading scorer for the Boomers this season, while Madeleine Garrick (11.9 points, 3.7 rebounds, 2.1 assists and 1.6 steals) flies under the radar with solid performances. For the Lightning, the damaging duo of Stephanie Talbot (16.1 points, 8.0 points, 4.0 assists and 2.0 steals) and Brianna Turner (15.5 points, 10.2 rebounds, 1.2 steals and 1.8 blocks) were both phenomenal last round and gone to another level as the season has progressed. Lauren Nicholson is never far from the action, averaging 14.7 points, 3.0 rebounds and 2.4 assists, while Nicole Seekamp‘s playmaking ability (12.0 points, 3.4 rebounds, 7.3 assists and 1.1 steals) creates a point of difference within the side. Melbourne will be confident at home in this game, but Adelaide is known to cause upsets, and the Lightning could make a move to head into Christmas with a win on the board.