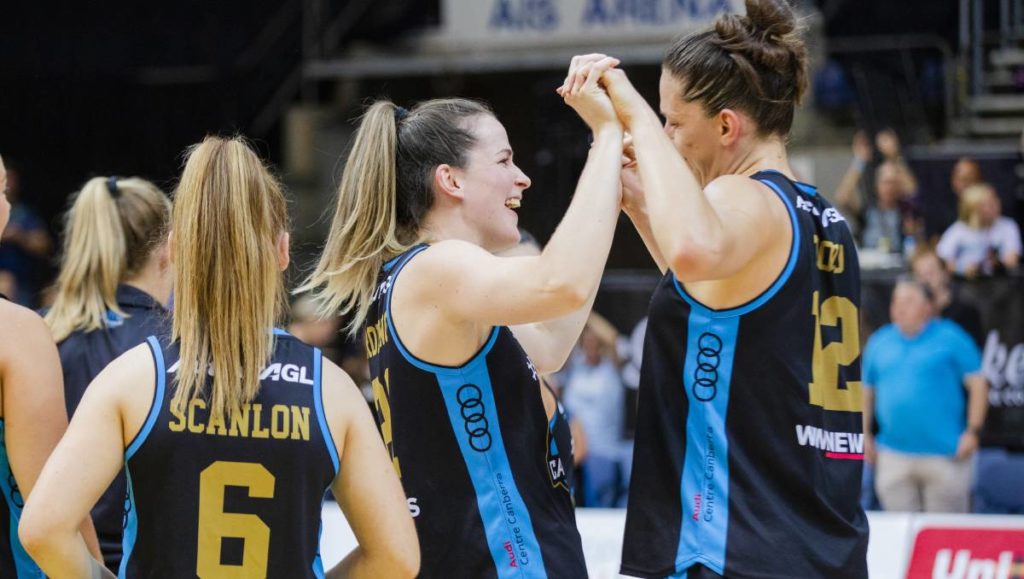 COMING in with the same regular season record whilst previously splitting the series down the middle with a win each, this game was deeply consequential and fortunately it lived up to the hype. But it was the Canberra Capitals who secured the ‘W’ and the grand final hopes, eliminating the Melbourne Boomers in a memorable clash at the AIS Arena.

Starting the game with a three pointer from MVP Kia Nurse, the intensity ran high from the very beginning. Capital’s Kelsey Griffith and Nurse came out hot leading the charge with eight points a piece to end the first quarter. All of a sudden, Boomer fan’s fell dead silent as beloved sharp shooter Stella Beck landed awkwardly when going up for a rebound with Griffith, holding her ankle in pain. She inevitably had to be carried off the court and would not return, adding to the already surmountable pressure to come through with a victory. However this would be an important turning point in the game as the Boomers, motivated to win for Beck, matched the Capitals 22 points in the third quarter. After a tech foul was handed out to Capital’s Nurse for flopping, a Boomers late game run push was imminent. The Boomers would carry on with this momentum going on a admirable seven point run in the fourth quarter, making it a ‘must watch’ four point elimination game in favour of the Capitals. However Olivia Epoupa would have the play of the game with a gut wrenching three pointer, diminishing all hopes of a Boomers comeback. With little time left, every fan on both sides knew the Capitals were safe.

The story of Game 2 where the Boomers left victoriously was one of their impeccable defence all game, finishing with a whopping eight blocks to the Capitals 0. However this game was another story as the Capitals came out of the gate with three blocks, and had more points than the Boomers coming off forced turnovers and from the fast-break. Nevertheless, the Capitals struggled all game to fire from long range, shooting only 14 per cent from behind the three point line. But instead of trying to fix something that was not working, the Capitals got their buckets in the paint. Capital’s coach Paul Gorris’ decision to play out the rest of the game the more traditional way, led the Capitals to get 44 of their 77 points just from the paint. Definitely a deciding factor for the Capitals to get over the line.

The UC Capitals efforts were commendable, relying heavily on their starting core to get them on the scoreboard. In fact the Capitals bench only contributed five points for the entire game, a statistic that the Capitals coaching staff must address before the grand final. Marianna Tolo was the undisputed star of the game putting up 20 points while grabbing seven rebounds. Capital’s Maddison Rocci was slightly disappointing offensively, playing the second most minutes on the floor but only putting up four points. However the Capitals having a consistent superstar in Kelsey Griffith always comes in handy in tough games like this as she put up 19 points and nine rebounds. Olivia Epoupa was also remarkable, flirting with a triple double with 11 points, eight rebounds and nine assists.

Boomer’s Sophie Cunningham did her best to keep the team from elimination putting up 14 points and five rebounds. Unfortunately she seemed to be the only light in a dark game for Melbourne, being the only player on the team to score double digits. While the last game was won off the backs of Lindsay Allen and Ezi Magbegor scoring 25 and 17 respectively while pulling down five and nine rebounds together. The Capital’s defence was too much to handle for the dynamic duo, as Allen only had nine points with Magbegor scoring just eight. Although, Boomer’s Cayla George did dish the rock successfully acquiring 12 assists.