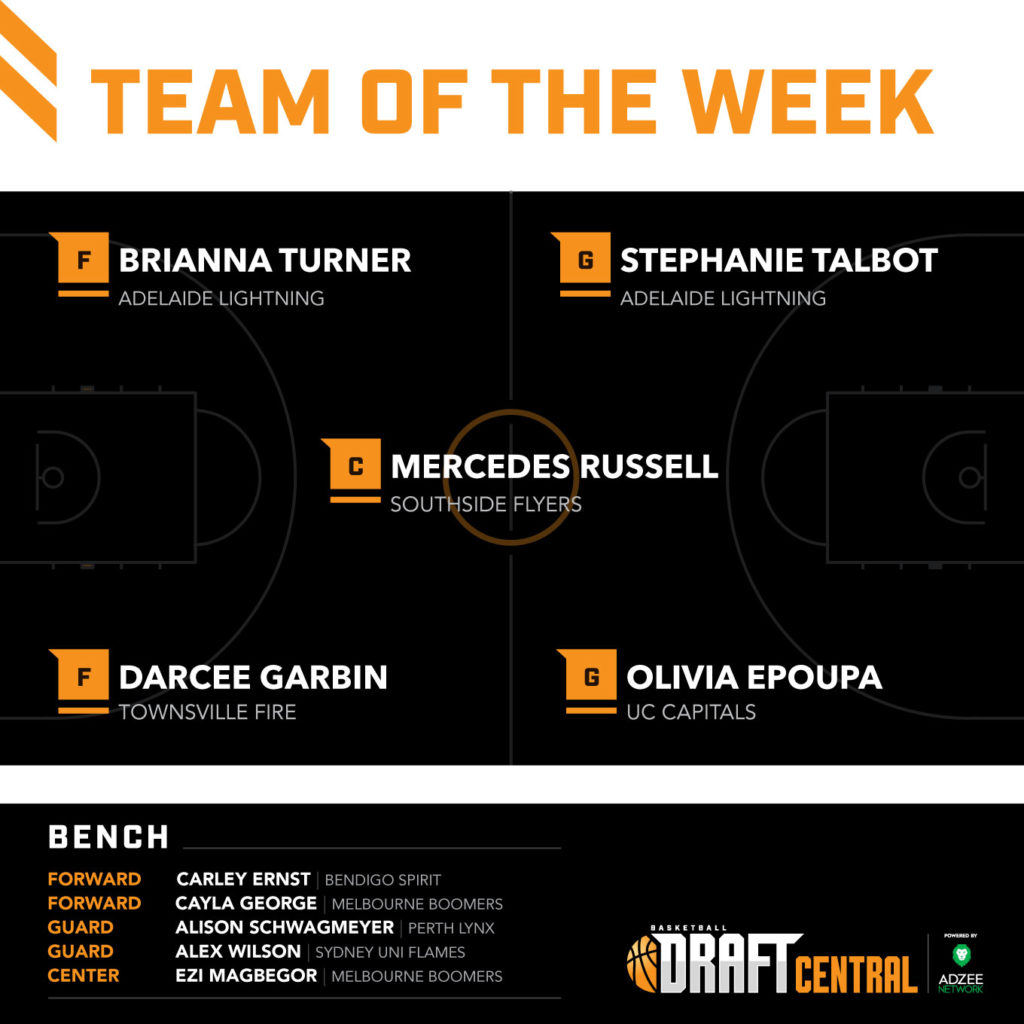 ALL eight Women’s National Basketball League (WNBL) sides are represented in our Draft Central Team of the Week for Round 9 after a highly competitive round of action. There were a number of strong efforts across the board, with Adelaide Lightning and Melbourne Boomers ending up with two players apiece in our team for the Round. All of the other six sides managed a nominee in the 10-player squad, with a handful of unlucky omissions as well.

Adelaide Lightning easy accounted for Bendigo Spirit on the weekend, with the Lightning rewarded with two starters in the team this week. Stephanie Talbot narrowly missed out on a triple-double thanks to 17 points, 10 rebounds, nine assists and two steals, while teammate Brianna Turner was superb across the board with 23 points, 13 rebounds, two assists, three steals and five blocks. The Boomers on the other hand, had two players on the bench this week, with Ezi Magbegor named as the relieving center, while Cayla George earned a spot as a forward. They went down to Perth Lynx, who had just the one player in Alison Schwagmeyer, but in what was largely a team effort to get it done.

Also in the starting line-up is University of Canberra (UC) Capitals’ Olivia Epoupa, who once again filled the stats sheet with 11 points, eight rebounds, seven assists and four steals, joining Talbot as a starting guard. The other starting forward was Townsville Fire’s Darcee Garbin, who was the clear standout for the Fire across two games, averaging 21.5 points, 8.5 rebounds, 1.5 assists and 1.0 steals. The remaining starter in our Team of the Week was Mercedes Russell, whose season continues to get better and better, posting up 14.5 points, nine rebounds and two assists across two wins for the Southside Flyers in Round 9. The two other players to fill out bench sports were stars in losing sides, with Sydney Uni Flames’ Alex Wilson, and Bendigo Spirit’s Carley Ernst.

There were a number of unlucky players to miss out this round, including Townsville duo, Tess Madgen and Bridget Carleton, Southside’s Jenna O’Hea, Perth’s Katie-Rae Ebzery, Bendigo’s Demi Skinner and UC’s Marianna Tolo, who were all considered for a spot this round.