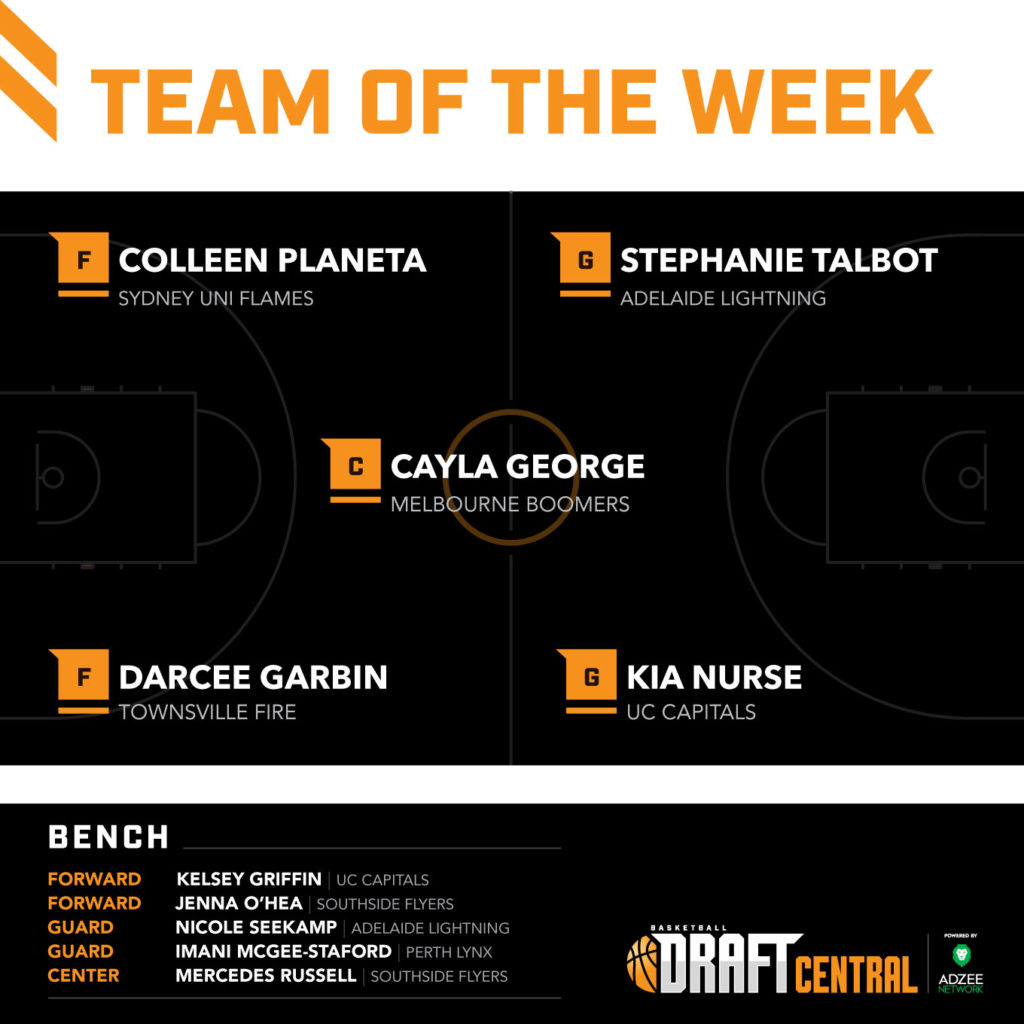 IN an action-packed weekend of Women’s National Basketball League (WNBL) action, our Draft Central WNBL Team of the Week for Round 8 was difficult to pinpoint. Plenty of players, particularly in the guard position stood tall and produced some memorable individual performances, while a number of forwards also picked up big numbers. Overall, Adelaide Lightning, University of Canberra (UC) Capitals and Southside Flyers all had two players in our team, while Bendigo Spirit was the only side without a member in the 10-player team.

Adelaide’s Stephanie Talbot earned a coveted starting guard position with 22 points, 10 rebounds, three assists, three steals and 2.5 blocks in one of the top weekend’s of any player. She was joined in the team by teammate, Nicole Seekamp, while Lauren Nicholson was one of the more unlucky omissions. Also in the starting guard position was high volume shooter, Kia Nurse who poured on 32 points, three rebounds, three assists and one block, joined in the team by regular Team of the Week member, Kelsey Griffin. Starting in the center was Melbourne boomers’ Cayla George who earned the spot rather than a forward position because her effort of 15.0 points, 6.5 rebounds, 3.5 assists and 2.0 steals was too good to ignore.

Moving onto the starting forwards, Sydney University Flames’ Colleen Planeta and Townsville Fire’s Darcee Garbin had outstanding performances to be their team’s sole nominee in the Team of the Week, but also round out the starting side. Planeta scored 28 points, 12 rebounds, two blocks and one assist for the Flames, while Garbin finished with 27 points, seven rebounds, three assists and one steal for the Fire. Looking to the bench, Perth Lynx’s Imani McGee-Stafford was named in the guard spot, while Southside Flyers’ duo Mercedes Russell and Jenna O’Hea both make the side in the bench center and forward positions respectively.

Among the other unlucky players to miss out were Melbourne’s Madeleine Garrick and Lindsay Allen, Southside’s Leilani Mitchell and Sara Blicavs, Sydney Uni’s Alice Kunek, Bendigo’s Tessa Lavey, Townsville’s Tess Madgen and UC Capitals’ Marianna Tolo who all came into consideration for a spot in the side.