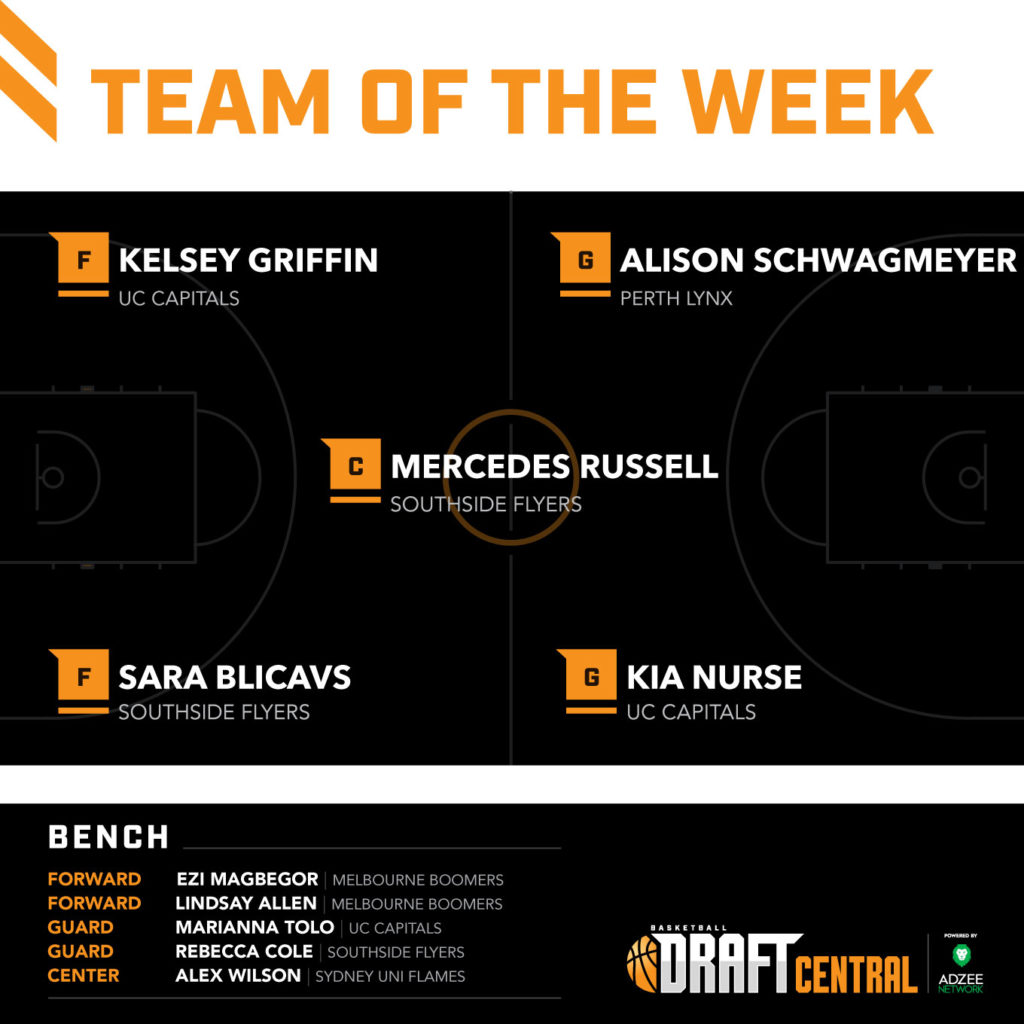 EIGHT of the 10 players in our Draft Central Women’s National Basketball League (WNBL) Team of the Week are from the top three sides, showing their dominance across the weekend. University of Canberra (UC) Capitals and Southside Flyers both recorded three players in the Team of the Week, while Melbourne Boomers had two. Perth Lynx and Sydney Uni Flames rounded out the team with a player each in the side, as Adelaide Lightning, Bendigo Spirit and Townsville Fire missed out on having a player in this week’s team.

It was highly competitive for spots in the Round 6 team, as UC Capitals’ duo Kelsey Griffin (19 points, 15 rebounds, three assists, two blocks and one steal) and Kia Nurse (18 points, seven rebounds, six assists and one steal) both made the starting side. Marianna Tolo also made the team on the bench after her 12 points, 10 rebounds, four assists, one steal and three blocks in the center position. Southside Flyers had a couple of starters in the team as well, with Mercedes Russell taking that center spot once again thanks to 17 points, nine rebounds, two assists and one block, shooting at an impressive 77.8 per cent from the field. She was joined in the team by Sara Blicavs who starts in the forward half after 12 points, 13 rebounds and four assists, while Rebecca Cole slots onto the bench.

Melbourne Boomers had two players make the team, albeit on the bench. Ezi Magbegor and Lindsay Allen were both named in the forward spots after a couple of impressive performances over two games. To round out the starting side, Alison Schwagmeyer was once again a shining light for Perth Lynx, sinking 22 points, 8.5 rebounds, 1.5 assists and one steal across two matches. The final member of the 10-player team was Sydney Uni Flames’ Alex Wilson who filled out the second guard spot on the bench.

With so many incredible individual performances over the weekend, it was hard to split some players, with Adelaide’s Brianna Turner, Townsville’s Abby Bishop and Bendigo’s Rebecca Tobin all unlucky not to be a representative in the team. Others who impressed but just missed out on selection were Perth’s Lauren Mansfield, Southside’s Leilani Mitchell and Jenna O’Hea, Sydney Uni’s Colleen Planeta and Lauren Scherf, along with Melbourne’s Cayla George.