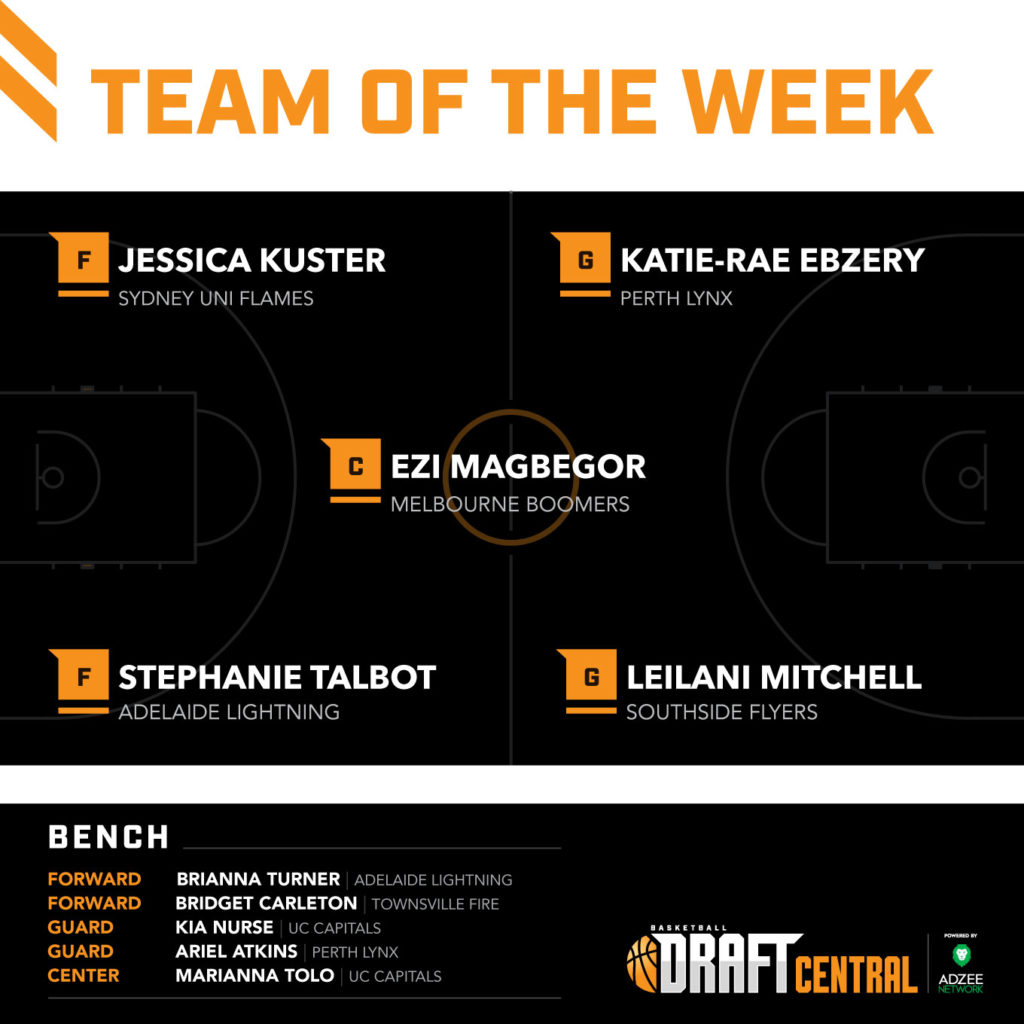 IN a short round of the Women’s National Basketball League (WNBL), just four games were played and therefore it made for an even playing field with every player making the team having played one game. Of the individual performers who made the cut, two were from Perth Lynx, Adelaide Lightning and the University of Canberra (UC) Capitals, with one representative from four other sides, as Bendigo Spirit was the only team without a nominee for Round 15.

Perth’s Katie-Rae Ebzery was the easy choice to start as a guard following her terrific 28 points, six rebounds, two assists, three steals and three blocks as the only player across the competition who recorded at least two of each of the five main statistics. She is joined in the side by teammate, Ariel Atkins who picked up a double-double and is on the bench ready to provide support. Meanwhile in the forward half of the court, Adelaide Lightning’s Stephanie Talbot again made the side following a double-double with 16 points, 10 rebounds, six assists, three steals and one block, shooting at 61.5 per cent from the field. Talbot and partner-in-crime, Brianna Turner both impressed despite the Lightning’s loss, and earned spots in the 10-player side. The UC Capitals were the other side with two players on the team, as Kia Nurse and Marianna Tolo both filled out two of the bench spots in the guard and center positions respectively.

Back to the starting side, and the other guard is Southside Flyers’ Leilani Mitchell. She was surprisingly the only Flyer to make the side despite the impressive win, but shone the brightest across the board with 21 points, five rebounds, four assists and two steals, though it is fair to say Rebecca Cole, Sara Blicavs and Mercedes Russell were all unlucky to miss out after being considered. Ezi Magbegor slotted into the starting center position in a round where there were plenty of possible players for the spot, picking up 21 points, five rebounds, two assists and three blocks. Like the Flyers, the Boomers were unlucky not to have another nominee, though both Sophie Cunningham and Sara Blicavs were considered. The final starting spot went to Sydney Uni’s Jessica Kuster following the forward’s 17 points, six rebounds, eight assists, five steals and one block, and an impressive 66.7 per cent shooting efficiency from the field.

Rounding out the bench was UC Capitals’ Marianna Tolo in the center position, and Townsville Fire’s Bridget Carleton who slotted into the bench forward role. Those who were unlucky to miss out and were considered for a spot included UC Capitals’ Maddison Rocci and Kelsey Griffin, Bendigo Spirit’s Shyla Heal and Gabrielle Richards, Townsville Fire’s Darcee Garbin, and Perth Lynx’s Nadeen Payne.