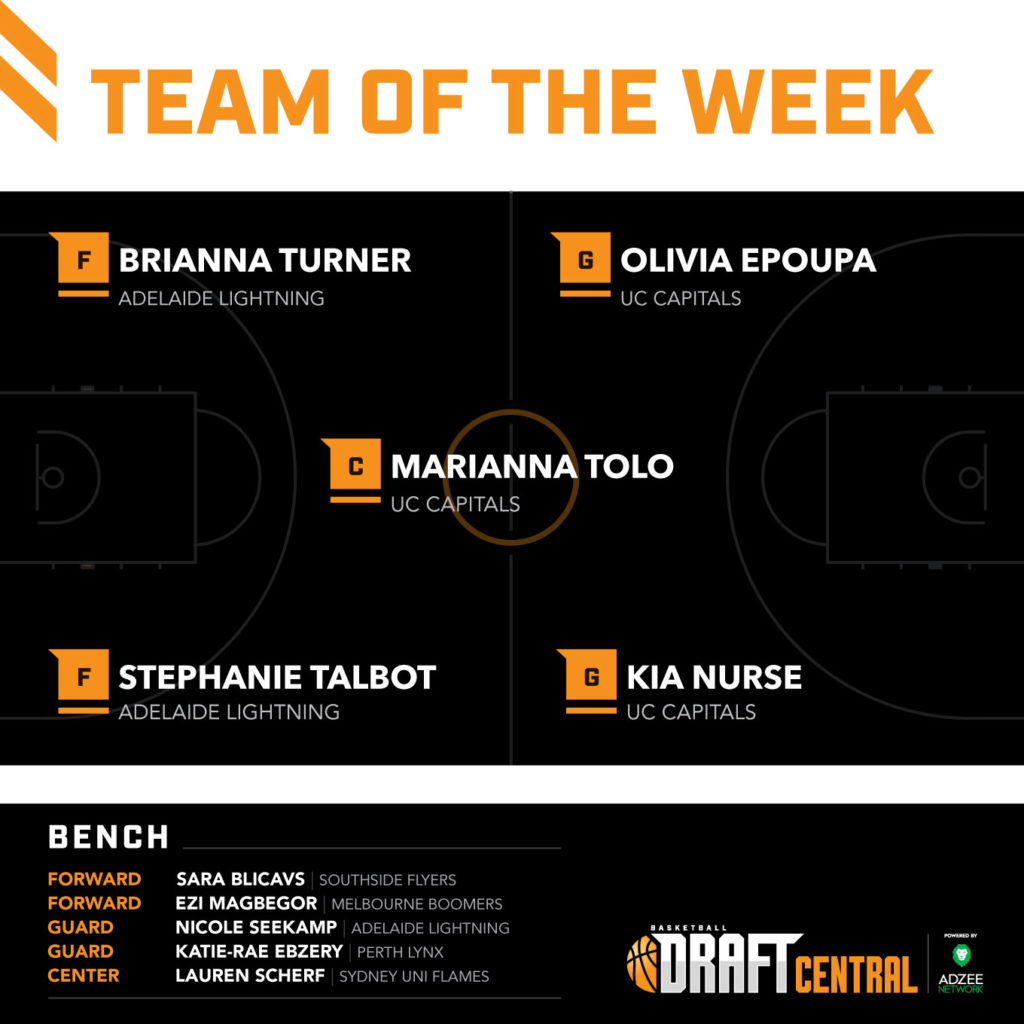 IN a Draft Central Team of the Week first, our starting five players are made up of just two sides – the University of Canberra (UC) Capitals and Adelaide Lightning. Both sides had huge wins on the weekend, with the Capitals downing the top two teams, while the Lightning smashed Townsville Fire. In the 10-player Team of the Week, the sides made up 60 per cent of the representatives, with one player from four other sides – Perth Lynx, Sydney Uni Flames, Southside Flyers and Melbourne Boomers. After disappointing losses, neither Townsville nor Bendigo Spirit had a player in the team this round.

The UC Capitals’ trio of starters are the three that had absolutely remarkable weekends considering the mounting injury toll with star, Kelsey Griffin still out and Keely Froling also injured near the end of the first game. They smashed the Flyers on the road in a stunning performance, and along with the overtime win over Melbourne, earned three players in the Team of the Week. Kia Nurse averaged a massive 28 points, five rebounds and one steal per game on the weekend, joined in the side by two players who posted double doubles. Marianna Tolo makes the side again in center after recording numbers of 17.5 points, 10.5 rebounds, 3.5 assists, 1.5 blocks and 1.0 steals, while Olivia Epoupa had 11.5 points, 14.5 rebounds, 7.5 assists and 4.0 steals in a huge couple of games.

Adelaide Lightning’s damaging duo of Stephanie Talbot and Brianna Turner round out the side in the starting forward spots. Talbot put up 16 points, 10 rebounds, three assists, three blocks and one steal against the Fire, shooting at 53.8 per cent from the field. Her partner-in-crime Turner had 15 points, nine rebounds, three assists and two blocks in the big win. Nicole Seekamp also made the bench to make it three for the Lightning, and equal most with the Capitals in the side. The four remaining spots went to players of other sides, with Perth guard Katie-Rae Ebzery and Sydney Uni center Lauren Scherf in the side, as well as forwards from the top two sides in Sara Blicavs and Ezi Magbegor who put out two consistent performances for one win and one loss each.