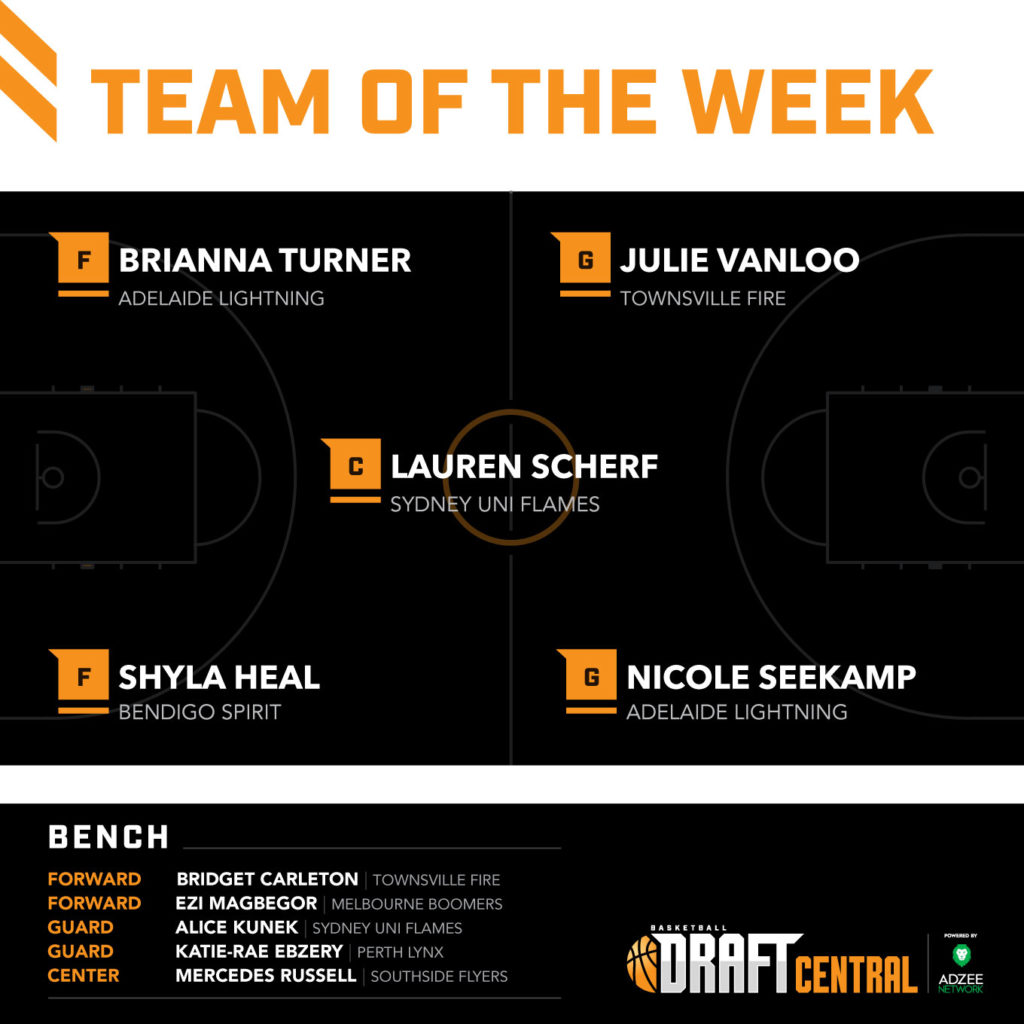 IT was an even round of action in the Women’s National Basketball League (WNBL), with the 10 players in our Draft Central Team of the Week spread between seven of the eight sides. Only reigning premiers University of Canberra (UC) Capitals did not have a representative this week, with Adelaide Lightning, Townsville Fire and Sydney Uni Flames all having two representatives.

Adelaide Lightning had two starters in our Team of the Week, with Nicole Seekamp filling out a guard spot after 11 points, six rebounds, 11 assists and two blocks, joining Brianna Turner in the side who posted 23 points, 11 rebounds, two assists, two steals and four blocks, also shooting at 75 per cent from the field. Townsville’s Julie Vanloo is the other guard in the side after averaging 14.5 points, six rebounds and eight assists across two games, while teammate Bridget Carleton has earned a spot on the bench following a double-double. The other side with two players is Sydney Uni, with the Flames’ Lauren Scherf starting as center following 16 points, 10 rebounds, two assists, two steals and three blocks, while Alice Kunek sank an equal round-high 30 points and earned a spot in the bench.

The final member of the starting five is Bendigo Spirit’s Shyla Heal who despite her side losing, posted 30 points, six rebounds and three steals at 68.8 per cent from the field. Looking to the bench, Perth Lynx’s Katie-Rae Ebzery is the other guard, while Ezi Magbegor slots into a forward role. In the center, regular Team of the Week nominee, Mercedes Russell has earned a place in the side. There were plenty of players unlucky not to make the side, including Southside Flyers’ trio, Leilani Mitchell, Rebecca Cole and Jenna O’Hea, UC Capitals’ duo Keely Froling and Marianna Tolo, Adelaide’s Kathryn Westbeld, Bendigo’s Carley Ernst, Townsville’s Tess Madgen, Sydney Uni’s Jessica Kuster and Melbourne’s Cayla George who all put up solid performances throughout the round.