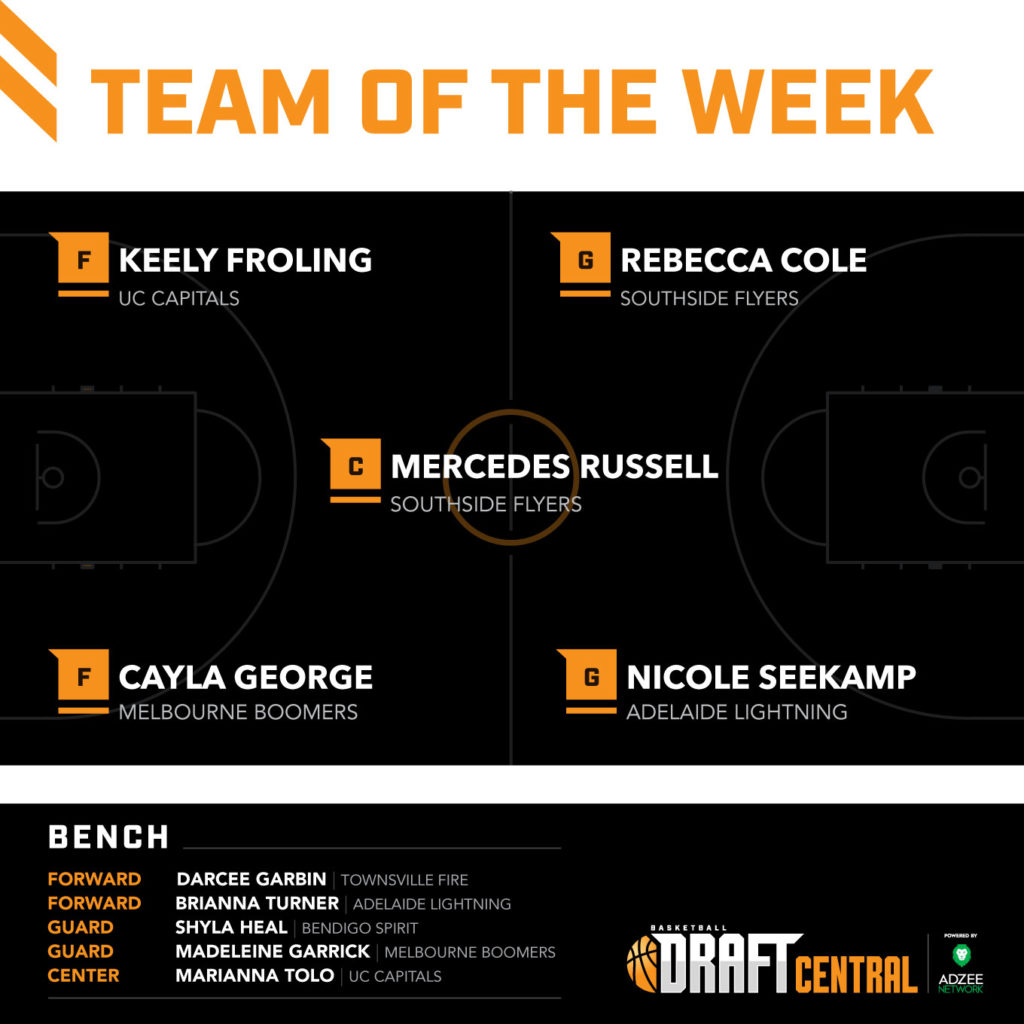 IN the first outing of 2020 for the Women’s National Basketball League (WNBL) the Southside Flyers, Melbourne Boomers and Adelaide Lightning had some key players put their hand up for Draft Central’s Team of the Week.

Southside Flyers duo Rebecca Cole and Mercedes Russell impressed once again with the two proving a deadly combo. Cole hit the scoreboard in her first game of the round, finishing with 30 points to her name and while she had a quieter outing against Adelaide, she still plied her trade with 18 points, four assists, and three rebounds. Flyers center, Russell recorded a double-double in both games with 15 points, 11 rebounds and 28 points, 10 rebounds respectively to give her the starting position.

Marianna Tolo inflicted her fair share of scoreboard pain in knocking back 26 points, but the damage did not stop there with Tolo also showing her strength off the boards by picking up 17 rebounds. She was a key asset for the Capitals along with Keely Froling who proved she was no slouch when it came to scoring, posting 22 points and 11 rebounds despite her sides’ loss. Melbourne Boomers star, Cayla George continued her hot form, pushing her side to another convincing victory and recording a double-double thanks to her 18 points and 10 rebounds.

Nicole Seekamp also made her way into Round 12’s Team of the Week credit to her craftiness with ball in hand, amassing a whopping 20 assists and while she did not do a wealth of damage on the scoresheet, was the key playmaker for Adelaide. Teammate, Brianna Turner was a shining light for Adelaide, finding her way to the basket with ease and running amok when given the time and space. She nailed 17 points in her first outing and added another 25 to her growing points tally.

Even though the Townsville Flames did not walk away with the win, Darcee Garbin stood tall once again with the talented forward nailing 21 points to be her sides’ leading points scorer while also managing seven rebounds to cap off her performance. Youngster Shyla Heal had a standout game in Bendigo’s victory with the 18-year-old making it look easy notching up 24 points, eight rebounds and one assist. Fellow guard Madeleine Garrick also earned a spot in the side after a convincing performance against the lowly Sydney Uni Flames sinking 19 points, seven rebounds and an impressive five steals.