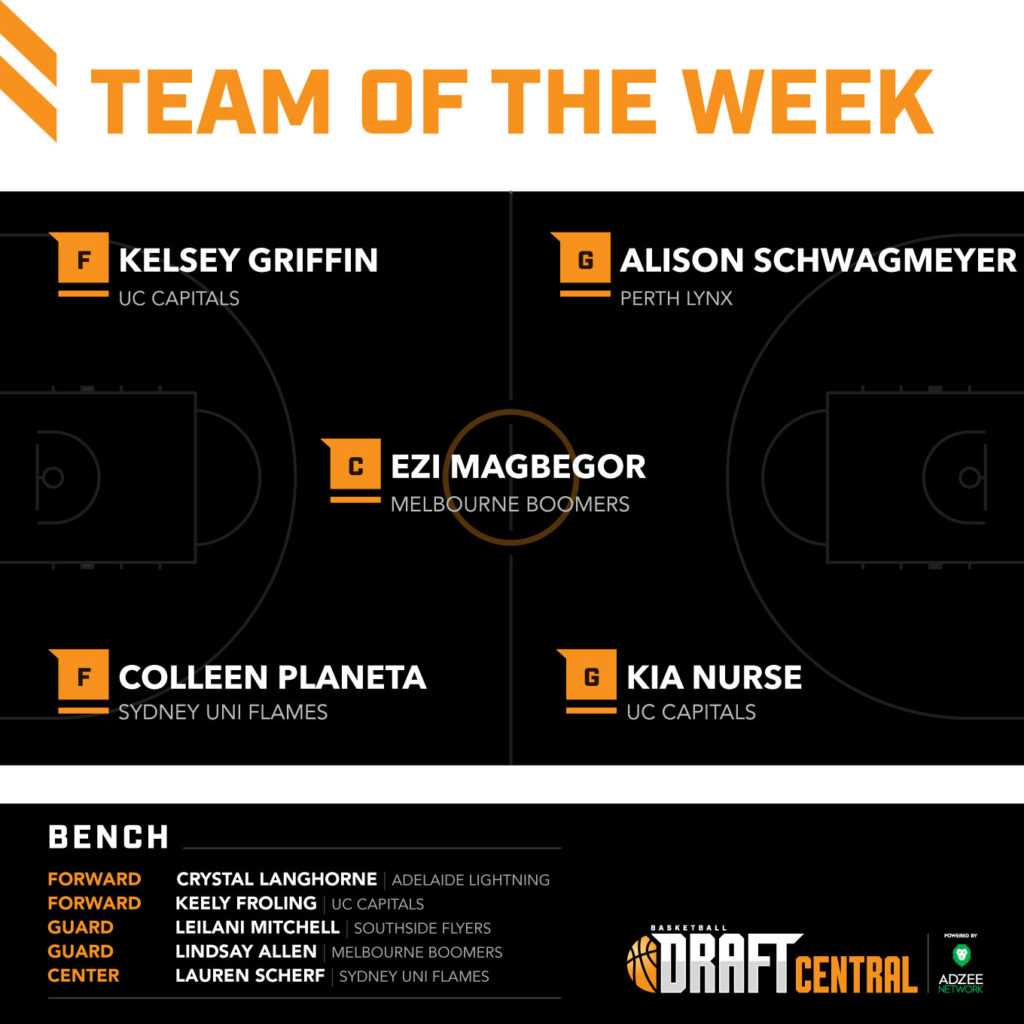 UNIVERSITY of Canberra (UC) Capitals have dominated the Draft Central Women’s National Basketball League (WNBL) Team of the Week, with three players named in the side after an impressive Round 1 victory. Melbourne Boomers had two players after their Round 1 win, while fellow winners, Southside Flyers (1-0), Perth Lynx (1-0) and Adelaide Lightning (1-1) each had a player in the team. The big surprise was Sydney Uni Flames having two players despite back-to-back losses, but a couple of standouts deservingly made their way into the 10-player squad with just Bendigo Spirit and Townsville Fire not having a player in the side.

The Capitals’ dominant third quarter which spurred them onto victory was lead by starters, Kelsey Griffin (22 points, 20 rebounds, three blocks and three assists), Kia Nurse (28 points, seven rebounds, one assist, one steal and one block) and Keely Froling (22 points, 11 rebounds, one assist, one steal and two blocks). A crucial player missing from the opposition in that game was Lightning talent, Crystal Langhorne who sank 20 points and 13 rebounds in the Lightning’s earlier win over Sydney Uni.

Speaking of Sydney Uni, it was hard to overlook Colleen Planeta who had a couple of superb performances, the most consistent player over two games with 20.5 points and 10 rebounds, while Lauren Scherf was strong in the center position with 10.5 points, 12.5 rebounds and two assists. In the loss to Perth, it was Alison Schwagmeyer who did plenty of the damage for the Lynx, named in the Team of the Week after 21 points, 10 rebounds, two assists and two steals.

Also in the Team of the Week was Melbourne Boomers’ duo, Ezi Magbegor and Lindsay Allen. Magbegor made it into the starting centre position after 19 points, seven rebounds, two assists and two blocks, while Allen slotted into a bench guard position thanks to 19 points, six rebounds and seven assists. Rounding out the 10-player squad was Leilani Mitchell who put up 21 points, six rebounds, four assists and two steals on debut for the Flyers.