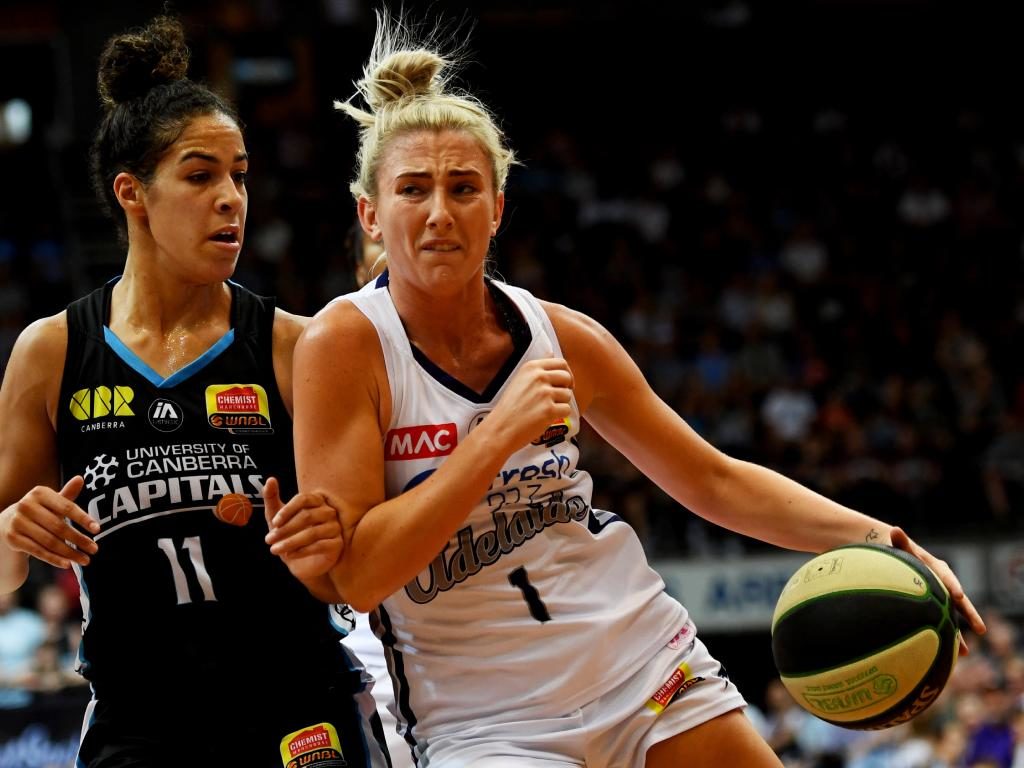 IT is now or never for the two sides just outside the top two positions on the Women’s National Basketball League (WNBL) ladder with the University of Canberra (UC) Capitals and Adelaide Lightning needing victories if they are to force their way into the favourable finals spots. The season might be over for four teams, but pride is still on the line, and they can still impact the finals series with some upsets in the penultimate round of action.

The standalone Wednesday night fixture is the re-scheduled Round 12 game between University of Canberra (UC Capitals) and Perth Lynx, which was delayed due to the recent heavy smoke plaguing the nation’s capital three weeks ago. With just two rounds to go, the WNBL deemed it was the right time and safe enough with the forecasted weather, for the game to go ahead. With Perth already scheduled for a Friday night game, the match had to be at least a couple of days earlier hence the Wednesday night time slot. This game will really add an extra element to the WNBL Round 15, with the Capitals able to put pressure on the top two sides. While the points differential means they cannot overtake the Boomers on one win alone, it moves them to within one victory of overtaking them. A loss however, and they could slip to fourth with an upset win for the Adelaide Lightning over Southside Flyers. So far this season the Capitals are 7-1 at home with only the Flyers having found the key to victory, and are coming off two vital wins over the Boomers and Flyers in Round 14. For the Lynx, the season might be over with a three and a half gap deficit to the Lightning, but they are the best of the rest and are the leading side to finish fifth on the table. In the two clashes thus far, the Capitals have got up by comfortable margins of 18 and 17 points in November and December respectively. Kia Nurse is coming off a 33-point game against the Flyers and now averages 20.8 points, 3.9 rebounds and 2.7 assists per game, while Marianna Tolo has stepped up in the absence of teammates with 14.2 points, 8.2 rebounds and 1.6 blocks per game in the center, while Maddison Rocci benefited from a step-up in time and role to post 19 points in the Capitals’ win in Round 14. Perth will hope to take greater advantage of a Capitals side missing Kelsey Griffin and Keely Froling, with Katie-Rae Ebzery ever-consistent this season, posting 15.7 points, 4.7 rebounds, 4.6 assists and 1.4 steals per game. Nadeen Payne (10.3 points, 4.1 rebounds) and Lauren Mansfield (9.9 points, 3.4 rebounds, 4.5 assists and 1.8 steals) are the other two Lynx players who have started every match and will be crucial in the match.

Backing up from Wednesday night’s game, Perth travels south to meet Bendigo Spirit on Friday night. The Lynx will have a huge chance of collecting a win over the bottom placed side, even though they have struggled on the road with a 2-5 record that could be 2-6 by the game’s tipoff. Bendigo have been much stronger at home than away, winning four of 10 at home whilst not winning a game while visiting. The teams have played twice this season and the last time they met in Bendigo, the Spirit got up by 12 points in a great win. Perth sought revenge in the Round 13 match however, knocking over Bendigo by 19 points in Perth. Neither of these sides can make finals, but a win for the Spirit would move them closer to the Fire with the bottom two sides facing off in the last round, while the Lynx can gain some separation on the bottom three sides. Bendigo has just the two players who are averaging double-figure points with Carley Ernst and Abigail Wehrung recording 12 and 10.9 points per game respectively. Ernst also averages 6.6 rebounds per game, while Wehrung has been an inspiration coming off the bench. The Spirit have had just two players start every game, with Tessa Lavey (9.4 points, 3.3 rebounds and 3.7 assists) and Kelly Wilson (8.9 points, 4.2 rebounds, 6.1 assists and 1.4 steals) providing the best playmaking abilities in the team. For the Lynx, they would love to have Imani McGee-Stafford and Ariel Atkins both up and firing in the one team, with the American duo providing great support of the boards; McGee-Stafford leading the team with 8.4 rebounds per game.

Tipping off the Saturday night proceedings, seventh placed Townsville Fire host top two side, Melbourne Boomers in a bid to desperately improve from last round. The Fire were well beaten in both their matches and it does not get any easier here against a genuine title contender. At home the Fire are 3-5, while the Boomers are strong on the road with a 7-3 record and not afraid of winning in front of a hostile environment. On the two occasions the teams have faced off this season, Melbourne got up on both occasions, defeating Townsville by nine points back on October 27, and 16 points two months later. The Fire have missed Abby Bishop since she was mutually released from her contract, with the consistent performer averaging 15.9 points, 7.6 rebounds, 3.3 assists and 2.1 steals per game from 14 games prior to her departure. In her absence, Darcee Garbin (14.5 points, 6.3 rebounds) and Tess Madgen (12.5 points, 5.4 rebounds and 3.7 assists) have carried the load, while Bridget Carleton gets around the court and provides great offensive and defensive plays for the Fire. The Boomers have been steadily building over the season with lots of depth coming off the pine, and this game is a chance to try and gain some separation on the Capitals after the Boomers went down to the reigning premiers last week. A win would also move them closer to Southside setting up an unlikely charge for top spot if results go their way. Sophie Cunningham has been impressive of late, averaging 11.4 points and 3.7 rebounds per game, while the towering duo of Cayla George and Ezi Magbegor – who combine for 26.8 points and 14.8 rebounds – will also be a handful for the Fire in this game.

The other Saturday night game might be the most touted of the round, with a top four clash on offer and a result that will directly affect the finals make-up. If the Southside Flyers can get up over the Adelaide Lightning, expect the league’s newest rebranded side to take the minor premiership given the two-game gap on the second placed Boomers. At the same time, the Lightning will be almost certainly resigned to fourth spot, and meet the Flyers in the first week of finals, which could well happen anyway. However if the Lightning get up, then it opens the door for all top four sides, with the Lightning keeping the pressure on the third placed Capitals, while the Boomers could be knocking on the door of top spot with the Flyers potentially slipping up. These sides have played twice – both in Adelaide – with the Flyers getting up on December 1 by six points, before the Lightning returned the favour in Round 12 with an 11-point victory in front of home fans to all but lock up a top four spot. Now out at Dandenong, the Flyers are a difficult team to beat, having only lost to the Capitals twice and Sydney Uni once at home. The Lightning are 50 per cent on the road with four wins from eight games, but will have gained confidence from the big win last round. Mercedes Russell has been a star all season for the Flyers, pumping out numbers of 16.7 points and 10.2 rebounds per game in the center position, well aided by the likes of Rebecca Cole (16.6 points, 3.3 rebounds and 3.8 assists) and Leilani Mitchell (16.0 points, 3.3 rebounds, 5.5 assists and 1.4 steals), while Sara Blicavs has been the side’s top player in the last few weeks. For the visitors, Brianna Turner and Stephanie Talbot continue to create headaches for the opposition, combining for 31 points, 18.5 rebounds and three blocks per game. Lauren Nicholson has also been a consistent contributor for the Lightning, as has Nicole Seekamp who has stepped up in the past month.

Depending on Wednesday and Saturday nights’ results, the UC Capitals could be battling for second spot with a win here against the Sydney Uni Flames. The Capitals need to defeat Perth Lynx and for Townsville to upset Melbourne, which granted is unlikely based on the Fire’s recent form and the Boomers’ ability to get the job done. However if it happens then it opens the door for the Capitals to access second spot with a win, and depending on the other Saturday night encounter between the Flyers and Lightning, might even give the reigning premiers a sniff at top spot. If the Lightning and Fire win, the Capitals could move to within one game of top spot, sitting pretty in second on the WNBL table. However, back-to-back losses this round would see the Capitals drop back below the Lightning in fourth spot. They are 7-1 on the table at home, while the Flames are 3-6 when on the road so they will need to defy the recent season history to cause an upset. The Flames are a much improved side on last year’s wooden spoon effort with Sydney Uni looking safe from that fate again in 2019/20. These teams have played twice this season, with the Flames causing a boilover back on October 27 with a six-point win over the Capitals, before UC clicked into gear a week later with a smashing 25-point victory. Olivia Epoupa is a versatile player who defies her 165cm height to be a real influence off the boards with 8.1 rebounds per game to accompany her 6.7 assists and 3.2 steals in a truly impressive effort. Along with Alex Delaney – who got her first start – and other youngsters in Gemma Potter and Abby Cubillo – who are getting vital time off the bench – the Capitals have plenty of depth to fill in for the injured Griffin and Froling. The Flames have had some strong contributors themselves this season, with Alice Kunek (18.9 points, 4.9 rebounds and 3.0 assists) leading the way, while Jessica Kuster (12.1 points, 6.6 rebounds and 1.1 steals) and Alex Wilson (11.2 points, 5.1 assists and 3.4 rebounds) have been strong, Lauren Scherf is also building some nice form of late and will be hard to stop in the center.