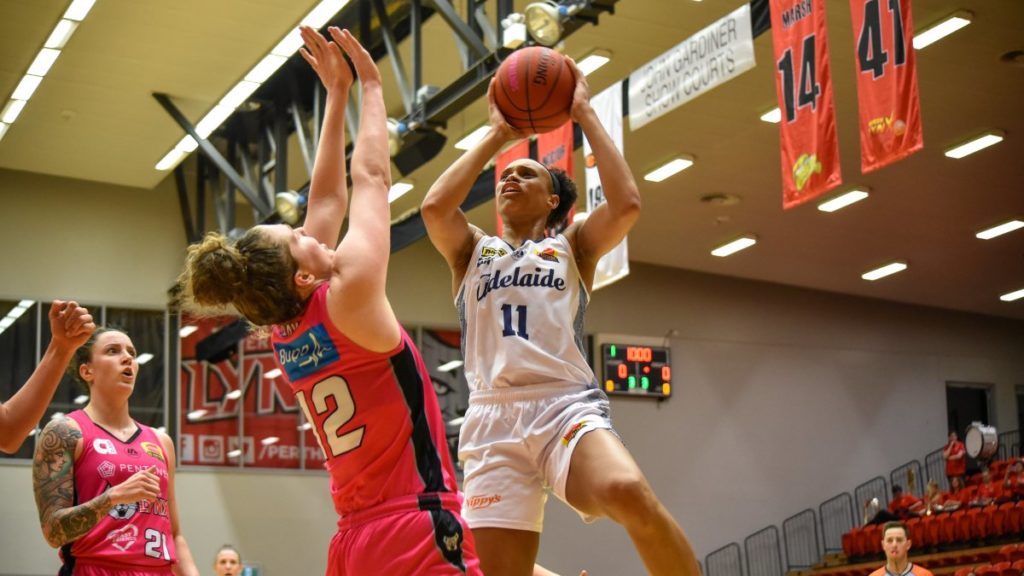 FIVE Women’s National Basketball League (WNBL) games will be played between Christmas and the New Year with the top of the table Southside Flyers to have a week off, while University of Canberra (UC) Capitals, Adelaide Lightning and Townsville Fire all play two games.

In the first game post-Christmas, fourth placed Adelaide Lightning will be keen to bridge the gap between themselves and third spot on the ladder, UC Capitals. This top four clash could well determine if a spot in the top three is still up for grabs, or whether or not the reigning premiers can consolidate their position with the top two Victorian sides. For Adelaide, a win keeps the Lightning in touch with the top three, while a loss throws them back to a mid-table log-jam. These teams have played just once this season, with the Capitals getting up at home by seven points. With Kelsey Griffin missing last round, it was the likes of Keely Froling who stood tall, picking up 30 points and taking her average to 14.3 points per game as well as 6.8 rebounds. Kia Nurse has been a consistent scorer for the Capitals with 20.4 points per game, while Olivia Epoupa continues to rack up the stats across the board, averaging 8.3 points. 6.8 rebounds, 6.3 assists and 3.3 steals per game. For the Lightning, the damaging duo of Stephanie Talbot (16.0 points, 8.2 rebounds, 3.9 assists and 1.8 steals per game) and Brianna Turner (15.8 points, 10.3 rebounds, 1.8 blocks and 1.1 steals) have been the key players throughout the 2019/20 WNBL season.

In Victoria, Melbourne hosts Townsville in a bid to retain second spot on the table after snatching it last round. The Boomers host the Fire who are just about out of finals contention, winning just three games from 12 so far this season and are three games outside the top four. For the Boomers, grabbing a top two spot will be crucial in their hopes of making it one step further than last year, and have a 5-2 win-loss record at home, while Townsville is just 1-5 when on the road this season. In these side’s only other head-to-head, Melbourne got up by nine points up in Queensland, with them previously winning both fixtures at home in the 2018/19 season, albeit by a combined 10 points. One can expect this will be an exciting contest, with the likes of Boomers Lindsay Allen (16.4 points, 3.4 rebounds, 5.2 assists and 1.3 steals) and Cayla George (13.4 points, 8.8 rebounds, 3.8 assists, 1.5 steals and 1.5 blocks) leading the charge, while Ezi Magbegor has been in good form of late. Abby Bishop continues to dominate games for Townsville, standing up each and every week to average 16.5 points, 8.2 rebounds, 3.4 assists and 2.4 steals per game, while Darcee Garbin (14.3 points, 6.5 rebounds and 1.3 steals per game) and Tess Madgen (11.6 points, 6.3 rebounds, 3.8 assists and 1.1 steals) have also been strong performers.

Townsville has less than 24 hours to turnaround from the contest against the Boomers in order to face bottom placed Bendigo Spirit up at Bendigo Stadium. It is fair to say a loss for the Fire here would rule them out of the finals race, and join the Spirit as the other team out of contention. Bendigo has a chance to draw within points difference of the Fire if it can get a good result here, but with nine consecutive losses, the Spirit have not had the start to the season they would have liked. The good news for Bendigo is they are better at home than on the road, winning both their games there, but they came early in the season, though Townsville are worse on the road with the 1-5 record. Carley Ernst was again prolific in the Spirit’s performance last round, averaging 10.5 points and 6.6 rebounds per game this season, while Demi Skinner has progressed from the bench to the starting line-up, averaging 10.2 points and 3.2 rebounds per game. Kelly Wilson is the other standout player this season for the Spirit, posting up numbers of 9.9 points. 4.0 rebounds, 5.6 assists and 1.4 steals per game. Bridget Carleton has been a valuable addition to the fire this season, with the Canadian putting up numbers of 11.4 points and 5.4 rebounds per game, while Belgium’s Julie Vanloo averages the 8.1 points and 3.6 assists.

Staying in the finals race last weekend, sixth placed Perth Lynx will hope to stand up against the reigning premiers, UC Capitals at home when the teams clash on Sunday afternoon. The Lynx are just half a game outside of fifth from Sydney Uni Flames, and a game and a half from fourth placed Adelaide Lightning as both those teams clash in Sydney later on in the afternoon. In this match, the Capitals will eye off second spot once against after Melbourne snatched it in Round 10. The Capitals have only played five games on the road, registering a 3-2 win-loss record, while the Lynx have split their home games at three wins and three losses apiece. In their only other encounter this season, the Capitals easily got the win at home, producing an 18-point win over the Lynx. Alison Schwagmeyer (16.3 points, 6.3 rebounds and 2.1 assists) has been important for the home side this season, as have Katie-Rae Ebzery (14.7 points, 4.3 rebounds, 4.8 assists and 1.4 blocks) and Imani McGee-Stafford (11.0 points, 8.7 rebounds and 1.4 blocks). The Capitals have no shortage of contributors this season, with others who have been strong performers across the board including Marianna Tolo (11.0 points, 6.5 rebounds and 1.5 blocks), Maddison Rocci (7.1 points, 2.4 assists) and Gemma Potter (2.8 points, 1.2 rebounds) who have been involved in all games when available.

To round out the weekend, Sydney Uni Flames will be eyeing off fourth spot with a do-or-die clash against Adelaide Lightning. Adelaide has first crack at retaining fourth spot courtesy of a match against UC Capitals on Friday night, but lose that and it is game-on here. The winner will secure fourth in that scenario, and while Sydney Uni’s points difference is a concern (minus 64), it has started to build some good form of late, winning both games last weekend, including an all-important victory over Southside Flyers. The Flames were able to topple the Lightning just a couple of weeks ago in Sydney and will be aiming to repeat the dose in this Round 11 match. Back in Round 1, Adelaide got the chocolates with a 10-point win in South Australia. Sydney holds a positive 3-2 record at home, while the Lightning are two from six when on the road. Alice Kunek has mirrored the team’s form as she racks up double doubles with ease, averaging 18.1 points, 4.8 rebounds and 3.3 assists per game, teaming well with Jessica Kuster (12.6 points, 6.6 rebounds and 1.2 steals). Colleen Planeta (15.7 points, 6.8 rebounds) has been constantly along the best and will leave a hole in the line-up after it was confirmed she injured her anterior cruciate ligament (ACL) in the Flames’ last game, while Alex Wilson (11.9 points, 3.3 rebounds and 4.9 assists) is always prominent. Talbot and Turner have been the key duo this season for the Lightning, but Lauren Nicholson (14.0 points, 2.8 rebounds, 2.4 assists and 1.6 steals per game) and Nicole Seekamp (11.6 points, 3.3 rebounds and 7.1 assists) are always carefully monitored by the opposition. A crucial game to close out the round and the year.