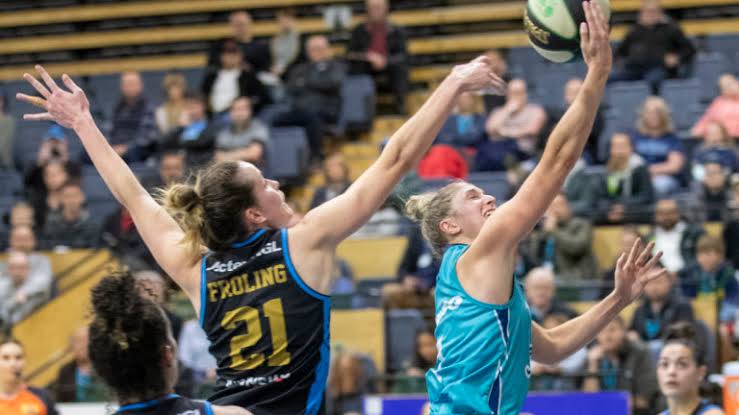 WITH the split round taking place in Round 5 of the Women’s National Basketball League (WNBL), we recap the two games that took place overnight, while previewing the remaining three matches this weekend.

Sydney Uni Flames have leapt past two sides on their way to sixth following an all-important home win against Townsville Fire last night. The Fire were coming off a terrific road win against Perth Lynx, but could not follow on from a strong second term to be overrun by the Flames and sent to the bottom of the table. Sydney Uni gained the advantage early, piling on 28 points to 21, before the Flames’ worst quarter of the season saw them struggle with just nine points to Townsville’s 21, heading into half-time with a five-point deficit. They picked up in the second half however, cutting the deficit to one by the final break, before a barnstorming 28-18 last quarter saw them extinguish the Fire, 82-73. Alice Kunek was the standout with 22 points, four rebounds, four assists, two blocks and one steal for the Flames, while Jessica Kuster (17 points, six rebounds) and Alex Wilson (16 points, three rebounds scored highly. Tahlia Tupaea (12 points, eight rebounds, three assists and two steals) and Colleen Planeta (11 points, six rebounds) rounded out a strong starting five effort with their work off the boards. For the Fire, Darcee Garbin was a standout with 19 points, seven rebounds and two assists, while Abby Bishop continued her good form of late with 14 points, five rebounds, seven assists and three steals. Tess Madgen (12 points, five rebounds, three assists and two steals) was impressive as well in defeat.

The UC Capitals emerged from their Round 3 slumber to make it two massive wins in a row, knocking off the previously undefeated Southside Flyers on the road. In the first of two games in Victoria, the reigning premiers put the challenge to the ladder leaders with a dominant first half, posting 27-19 in the opening term, then 29-14 in the second quarter to lead by 22 points heading into the main break. It was hard to fathom for the home crowd who were left a little stunned at Dandenong Stadium, as Southside managed to chew back three points in the third term, but could not make any inroads by the final buzzer to go down by 19 points, 72-91. The Capitals’ big guns were all firing once again as Kelsey Griffin lead the way with 14 points, 13 rebounds, three assists, three steals and one block, while Keely Froling‘s work off the bench was superb, notching up a double-double as well, posting 20 points, 10 rebounds, two assists and one block. Kia Nurse lead the scoring with 21 points, four rebounds and three assists, while Marianna Tolo (16 points, seven rebounds) and Olivia Epoupa (15 points, four rebounds, seven assists and three steals) were also prominent. For the Flyers, Leilani Mitchell stood up against her former side, sinking 23 points and collecting five rebounds, three assists, one steal and one block for the losers. Mercedes Russell had the 15 points and five rebounds but was quiet by her standards, while Sara Blicavs (11 points, six rebounds) was busy off the boards but had seven turnovers on the night. It was an evening to forget for the Flyers who will be keen to put that one behind them as they have a 16-day break until their November 23 clash with cellar dwellers, Townsville.

Looking ahead to the rest of the round, three games take place tomorrow night across three different states, with Thursday night’s winners hoping to make it a double-win weekend in Round 5.

Fresh off a victory over fellow bottom three side Townsville, Sydney Uni could really make inroads this weekend if they can topple the out-of-sorts Perth Lynx. While the Lynx have the home court advantage, they have dropped their past four games, two of which were at home with the most disappointing to the previously winless Townsville in Round 4. The last time these two sides met was in Round 1, with Perth claiming what would become its only victory of the season thus far, defeating Sydney Uni, 79-62. Last season the Lynx won all three clashes, including a massive 46-point belting in November. It will be the third straight time these sides have met at Bendat Basketball Centre, and Perth is desperate for a win to get back on track. Alison Schwagmeyer has been a shining light this season, posting up 19.4 points, 6.8 rebounds and 2.8 assists per game, while Katie-Rae Ebzery (13.6 points, 4.2 rebounds) and Nadeen Payne (13.4 points, 4.4 rebounds) has been the other consistent player off the boards. Imani McGee-Stafford has used her 201cm frame to have an impact in three games having had to recover from an ankle injury. She has averaged 14.7 points, 8.7 rebounds, 2.0 assists and 2.3 blocks thus far this season, and if back out on court could make it a trio of Americans, with Schwagmeyer and last week’s debutant, Ariel Atkins (19 points, seven rebounds and four assists). Meanwhile the Flames have had an up-and-down start to the season, but their American imports have also impressed, with Planeta (13.5 points, 7.0 rebounds and 1.3 blocks) and Kuster (11.2 points, 6.2 rebounds) solid, while Australian Kunek has been Sydney Uni’s best with 18.5 points, 4.3 rebounds and 3.7 assists across all six starts. The Flames are too far behind on points difference to overtake Adelaide, but should the Flames win and Bendigo Spirit lose, they would move to fifth on the table.

In a massive mid-table clash, Adelaide Lightning will be keen to steal back third spot from UC Capitals with a win. In what will be just the Lightning’s second home game – they won their other one against the Flames in Round 1 – they will be hoping to provide plenty of highlights to the crowd. Last time these sides met was last week when Bendigo upset Adelaide by 13 points. Last season, the Lightning won its clash at home and one on the road, while Bendigo won the middle game of the trio. With an identical points difference to the reigning premiers but a win behind, the Lightning must salute here to be any chance of snatching third spot, while Bendigo can grab Adelaide’s fourth spot if the Spirit get up by at least 27 points. Crystal Langhorne injured herself after a massive opening round debut for the Lightning where she put up 20 points and 13 rebounds, with fellow American import, Brianna Turner having to shoulder the load up forward with 16.4 points and 9.6 rebounds across the five games. Lauren Nicholson (17.2 points, 2.8 rebounds and 2.0 assists) and Stephanie Talbot (13.6 points, 9.6 rebounds) have been big off the boards, while Nicole Seekamp (12.6 points, 8.4 assists and 3.2 rebounds) has been the playmaker. For the Spirit, Rebecca Tobin has averaged 14 points, nine rebounds and two steals from just two matches, while Marte Grays has put up 11.2 points and 5.8 rebounds thus far this season. Without a genuine standout and the points shared across the board, others who have impressed include Kelly Wilson (10.5 points, 7.3 assists and 3.3 rebounds), Tessa Lavey (10.0 points, 4.5 assists and 3.7 rebounds) and Carley Ernst (9.7 points, 8.3 rebounds) who have become integral members of the starting five.

The final game of the round is just as crucial as the other two, with second spot up for grabs between Melbourne Boomers and UC Capitals. The Capitals are now on a two-game winning streak after a disappointing Round 3 that included losses to the Boomers and Flames. It was the manner in which the Capitals’ lost to the Boomers that would burn deeply in the reigning premiers’ minds, losing 107-72 in Geelong. Now at the State Basketball Centre, the Capitals will be keen to have a change of fortunes, and while that result has put a wide gap between the two teams, a Capitals’ win would still see them move past the Boomers having already collected the scalp of the Flyers last night and will look to knock off both top two sides in one weekend. The Capitals’ win over the Flyers was their first on the road for the season having won every game at home, while Melbourne’s loss to Southside last round was the Boomers’ first home loss of the year. Griffin has backed up her MVP winning ways with another double-double season to-date with 16.7 points, 11.7 rebounds, 3.0 assists and 2.2 steals per game. She has plenty of support across the court though, with Nurse (20.0 points, 3.3 rebounds and 2.5 assists) doing her thing up the scoring end, while Froling (17.8 points, 7.7 rebounds, 1.8 assists and 1.2 blocks) could make a case as one of the most improved this season. The inclusion of Frenchwoman, Epoupa has also been massive, averaging a balanced 9.5 points, 6.5 rebounds, 6.2 assists and a remarkable 4.0 steals per game. While they have been impressive, the Boomers have also had an even contribution of stars with Cayla George leading the way thanks to a double-double effort of 17.2 points, 10.6 rebounds, 3.0 assists, 1.2 steals and 1.4 blocks. American duo, Lindsay Allen (18.4 points, 6.0 assists and 4.0 rebounds) and Sophie Cunningham (10.8 points, 4.6 rebounds and 3.2 assists) have also contributed on the scoring front. UC’s form heading into the game is hard to ignore, but Melbourne had no trouble against the Capitals in Round 3 and could well hand out another punishment here.