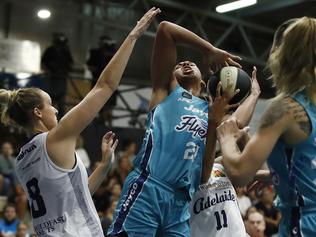 GAME 2 of the semi-finals between Adelaide Lightning and Southside Flyers will help decide which team progresses through to the next stage of the Women’s National Basketball League (WNBL) finals.

After a disappointing three-point loss, Adelaide Lightning play host to an in-form Flyers outfit that will be looking to inflict more pain on opposition this season. The Lightning will be hoping to draw on the home crowd advantage with the boisterous fans spurring them on at every point. The home side had their chances in their first clash but simply let it slip away when it counted while the Flyers on the other hand capitalised on every tiny error.

It was a relatively even match-up throughout Game 1 of the semi-final series with both sides posting similar numbers on the scoreboard and shooting at around the 36 per cent mark from the field highlighting just how evenly poised both sides were. The Lightning reaped in the rewards of their bench players outscoring their opponents 16 to seven showcasing just how dangerous they can be and the variety of options they have when going to basket. Another key difference proved to be the points in the paint (32-40) with the Flyers unable to convert in close but sinking them from down town sitting at 35.3 per cent while the Lightning lingered at 22. 2 per cent instead, doing most of their damage up close and personal.

The Flyers will have the belief that they can stand up to the pressure and whatever the Lightning throw at them having rode the wave only two days ago. Three players recorded double figures for Southside in their narrow win with Mercedes Russell leading the scoreboard assault with 20. Russell was unstoppable at both ends of the court racking up a huge 19 rebounds to accompany her 20 points to reel in yet another double-double and guide her side to a hard-fought victory an effort she will be hoping to replicate in her second semi-final. Teammate Rebecca Cole was just as handy posting up 13 points of her own and showcasing her rebounding knack with six and an impressive four steals. Leilani Mitchell was solid knocking back 15 points while Sara Blicavs had a relatively quiet game by her lofty standards an area she will want to rectify coming into this clash.

With the loss still fresh in their mind expect the Lightning to come out firing and most importantly with a point to prove. They have the talent and the depth to topple the highly touted Flyers having done it previously in the season and will be looking to knock them off their perch with the likes of Lauren Nicholson and Stephanie Talbot at the helm. Both have proven they can tear a game wide open with their strength and commitment. Import Brianna Turner fell just short of another double-double last game recording 11 points and nine rebounds but considering that was one of her quiet games could kick it up a whole other level in front of her home crowd. Throw in the likes of Chelsea Brooks and Kathryn Westbeld who had strong showings in their last encounter and the Lightning might just have what it takes to get the win.

If the Flyers are to get over the top of Lightning once again, they will have to shut down their bench players’ ability to come on and have an impact while continuing to attack the basket themselves. On the other hand, the Lightning must limit the Flyers second chances under the ring and deny any easy avenues to goal.