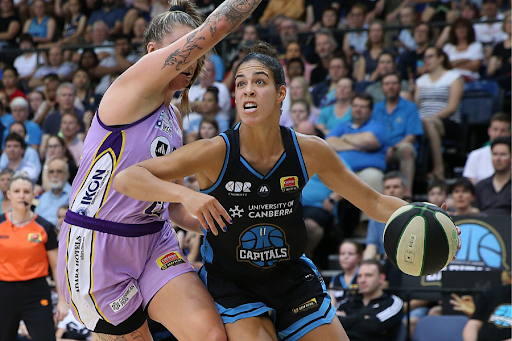 IT is now or never for the Melbourne Boomers, hoping to put last year’s Women’s National Basketball League (WNBL) semi-finals disappointment behind them and find something to level the scores against reigning premiers, the University of Canberra (UC) Capitals. The Capitals have overcome the odds through a severe injury list and found a way to reach second spot on the table and almost guarantee themselves a grand final place with two home finals. The Boomers dropped out of last year’s semi-finals after going down to Adelaide at home and then bundled out in a shock 2-0 sweep, but this year have the chance to force a third game in the series, coming in as underdogs.

Taking place at the State Basketball Centre on Sunday evening, the Boomers must win to remain in the WNBL finals series, following a comprehensive 14-point loss to the Capitals at AIS Arena. Given the Capitals’ strength at home, it will be difficult to try and topple them in Canberra – only the Flyers have been able to do it this season – but the third placed Boomers must focus on getting the job done at home first. While they are not quite the Capitals when it comes to home court dominance, they do have a 7-3 record there, while the Capitals have had some issues travelling, sitting at 5-5-. In saying that, the Capitals knocked off Southside on the road before anyone else could, and have proven that when at full strength – which they will be in this game – they are not afraid of anybody. In fact, the last time the Capitals played there, they enjoyed a three-point victory over the Boomers, a welcome result after Melbourne shockingly smashed them by 35 points a couple of weeks earlier at the same venue. That three-point win helped UC get the head-to-head over the Boomers when both were level on points, also winning by a point at their home court in January.

The Boomers have great depth on their list, and the likes of talls, Cayla George and Ezi Magbegor create headaches for any opposition trying to guard them. Rotating through the forward-center positions, George averages the most points of any Boomer, with 14.7 per game as well as 8.4 rebounds, 4.0 assists, 1.6 steals and 1.4 blocks showing she can do it all. She was also the recipient of the DC Medal for 2020 signalling her importance to the team. Magbegor is not far behind with 13.0 points, 6.5 rebounds, 1.5 assists and 1.0 blocks per game, making the duo keys to finding the win here. Lindsay Allen is also a regular playmaker with five assists per game to accompany her 14.6 points, while Sophie Cunningham and Madeleine Garrick round out the starting five and average double-figure points per game. Coming off the bench, Kalani Purcell has assisted off the boards with 4.5 rebounds as well as 2.1 assists and 1.5 steals, while Stella Beck has been the sixth player may times with a team-high off the bench, 6.1 points.

If we are talking depth though, it is hard to go past the Capitals who have six genuine starters in their side, making it the envy of the competition. Kia Nurse won the WNBL’s MVP for the season after she put up numbers of 21.5 points, 4.1 rebounds, 2.9 assists and 1.4 steals. Kelsey Griffin missed a portion of the summer due to injury, but still managed to finish the season with 15.0 points, 10.9 rebounds, 3.0 assists, 2.5 steals and 1.1 blocks per game, while another player who missed games due to injury was Keely Froling (13.6 points, 7.4 rebounds). In their absence, Maddison Rocci (9.4 points, 2.4 rebounds, 2.4 assists and 1.3 blocks) and Marianna Tolo (14.2 points, 7.9 rebounds, 2.1 assists and 1.7 blocks) have stood up, while Olivia Epoupa has been one of the recruits of the year with the Frenchwoman padding the stat sheet thanks to 8.4 points, 7.9 rebounds, 6.5 assists and 3.0 steals per game.

At home, Melbourne starts favourite and would be predicted to win in a thriller, but the kind of rare form the Capitals have found at the right time of year means it will be difficult. While the reigning premiers would be confident to close out the series next game with the dominance they have had at home, it would be a bigger relief to sweep their opposition in two games and earn the extra rest, especially if the Flyers end up sweeping the Lightning in Adelaide.