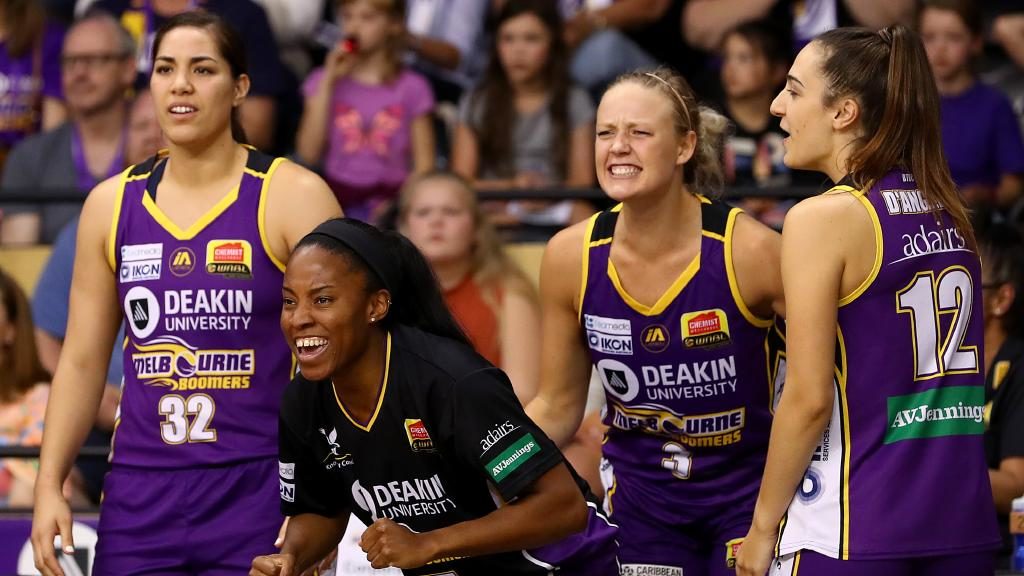 AFTER 15 rounds and three and a half months, the final round of the Women’s National Basketball League (WNBL) season is here. The 2019/20 run home was somewhat anti-climatic with the four finalists decided well out from the conclusion. Second and third spot can still change depending on results from the round, while the bottom four sides have pride on the line in Round 16.

There is only realistically pride on the line for these two sides in one of two Thursday night encounters. For the Flames, a win would secure sixth spot on the ladder, given seventh placed Townsville is only a win behind and also takes on wooden spoon-bound Bendigo Spirit. The Spirit will need to win their two remaining matches if they are to overtake the Fire, sitting a win behind as well as a 35-point differential from seventh to eighth. A loss here guarantees Bendigo the wooden spoon. Sydney Uni has won both previous matches against the Spirit, winning by five and seven points on the road, and now return home for the third and final head-to-head. Bendigo have not defeated the Flames since November 18, 2018, so will need to produce a special effort to get across the line and pick up win number five. Considering they are also yet to win on the road from eight encounters does not spell confidence. Jessica Kuster played well last time for the Flames, and is averaging 12.4 points and 6.5 rebounds after starting 17 of a possible 19 games. Along with Brittany Smart who earned her first start last round and put up 21 points, three rebounds and two blocks, the American duo could be quite a handful for the Spirit defenders. Tessa Lavey and Kelly Wilson are two of the guards likely to be tasked with trying to limit their influence, with Lavey averaging 9.5 points, 3.3 rebounds and 3.8 assists per game, while Wilson has put up numbers of 8.4 points, 4.1 rebounds and 5.8 assists per game. Sydney Uni should lock up sixth with a solid win here.

Adelaide Lightning have a tough final couple of weeks, going down to Southside Flyers last round, and now face fifth placed Perth Lynx and reigning premiers, University of Canberra (UC) Capitals in Round 16. The Lightning are at home, and have a 7-3 record there, while Perth have been a little shaky on the road, winning three of a possible nine games when travelling. Both teams have a positive points differential, with Perth having already secured fifth spot last round by winning. They cannot catch the Lightning in fourth, but would round off a good year if they can upset two finalists – they face Melbourne Boomers on Saturday – in the last round of the season. In their previous encounters, Adelaide has won both times, winning over in Perth by four points back in October, before making it two wins with a 10-point home victory over the Lynx in December. The Lightning have had their injury concerns this season, but have tended to rely on a couple of players in Brianna Turner (16.3 points, 9.8 rebounds) and Stephanie Talbot (14.9 points, 8.6 rebounds, 4.5 assists, 1.7 steals and 1.1 blocks). While others have stepped up at times, those two have been among the best in the league and often been the difference in matches. The Lynx have just been inconsistent, with their stars on paper not quite aligning on the same night. Katie-Rae Ebzery is the exception, with the Australian Opal being a ray of consistency all season long, posting numbers of 16.4 points, 4.7 rebounds, 4.4 assists and 1.5 steals per game. American, Alison Schwagmeyer has predominantly come off the bench but has been solid as well with 15.3 points, 5.6 rebounds and 1.9 assists per game. Adelaide have been more consistent and should win here, although Perth have impressed over the past month.

After a two-day gap, Adelaide plays its final game of the season, against a hungry UC Capitals determined to sneak into second spot on the ladder. The Capitals also need Perth Lynx to cause an upset on Saturday night against Melbourne Boomers based on the fact that the points differential between the Capitals and Boomers is 74, and would need two massive margins to have any hope of toppling them if both sides win. If the Capitals get up here, then they will watch with earnest later that evening to see if they will have one or two home finals in the first week of the WNBL finals series. The Lightning also have plenty to play for even though they might not physically be able to move up the ladder. The last thing the South Australian side needs is a couple of losses heading into finals, especially one against a finals-bound side. If both these teams cause upsets against their Victorian opponents in the semi-finals – as Adelaide did last year – then they will face off in the decider. This year Adelaide has tended to be the side that was better than the rest, but still a clear fourth side in the competition. Knocking off the Capitals on the road – who have only lost to the top of the table Southside Flyers there – would be a massive confidence booster, though the Lightning are 4-5 when travelling. In the two clashes this year, they have been split, with the respective home teams winning. The last time they played in Canberra, the Capitals got up in a close one, 90-83, though that was all the way back in Round 1. Adelaide won by 10 points in late December back on its home court. Despite injuries this year, last year’s Most Valuable Player (MVP), Kelsey Griffin is working back into form coming off the bench, scoring 20 points and seven rebounds.  Kia Nurse (21.0 points, 3.9 rebounds, 2.9 assists and 1.4 steals) has been a scoring machine all season, wile Olivia Epoupa (8.2 points, 7.9 rebounds, 6.8 assists and 3.2 steals) just fills up the stats sheet with great versatility. Aside from the damaging duo of Turner and Talbot, Nicole Seekamp and Lauren Nicholson can hold their heads high this season, putting up consistent numbers at different times during the season, while Chelsea Brook is an impact player off the bench. The Capitals will be too strong here, and with what is on the line, expect them to take no prisoners in front of a home crowd.

In what has ultimately been a disappointing season for both these teams, the final match for them ends up being a bottom two clash. Townsville Fire host Bendigo Spirit just to solidify seventh spot on the table, with the only chance of moving up (or losing their spot) is if Bendigo defeat Sydney Uni Flames on Thursday night. If the Flames get up, then neither of these sides can move, and Bendigo ends the season on the bottom of the table, regardless of result. The Spirit are yet to win a game on the road, having lost here back in early December when they went down by 14 points. Bendigo did manage to grab a rare win just before the New Year, defeating the Fire at home by a point in a tight contest. Townsville are only 3-6 at home, but are still likely to get the job done here given Bendigo’s inability to win on the road this season. Townsville heads into the clash with a three-game losing streak, while the Spirit are at three, and will be four if they go down to the Flames on Thursday. For the home side, Bridget Carleton has proven to be a great recruit this season, averaging 11.6 points, 6.4 rebounds and 1.2 steals per game. Darcee Garbin (14. points, 6.4 rebounds and 1.1 steals) has also been solid, as has Tess Madgen (12.4 points, 5.4 rebounds and 3.6 assists). The Fire have just not had the offensive connection that other sides have, with just one player averaging more than four assists per game. Bendigo is in the same boat, with only Wilson and Lavey managing more than two assists per game, while Carley Ernst (11.6 points, 6.6 rebounds) and Abigail Wehrung (11.1 points, 2.6 rebounds) have been the two scorers to average double-figure points this season. Townsville to win at home, but will be a sombre affair knowing the reality of the season.

To finish off their year, the top of the table Southside Flyers will be hoping to win in front of a home crowd against Sydney Uni Flames. The last time these sides met at Dandenong, Sydney Uni caused a boilover, with the Flames’ disappointing road record of 3-7 surprisingly including the minor premiers (as well as wooden spooners, Bendigo twice). The game in question came on December 21, when the Flames took the chocolates by seven points. Earlier in the season back in Round 2, Southside Flyers defeated the Flames by 13 points on the road. With a 7-3 record at home, the Flyers are very solid there and will want to finish off the season in style with a big win over a side that found a weakness last time the team’s clashed. Rebecca Cole has been the leading points scorer for the Flyers, averaging 17.2 points per game, while Mercedes Russell has put up a double-double this season of 16.6 points and 10 rebounds. Leilani Mitchell has enjoyed her move south from the Capitals, also being a key contributor, one of five players to average more than 13 points per game this season. Sydney Uni will head into the clash as massive underdogs, but have been able to provide some minutes to players off the bench once the season had slipped away, with the likes of Sarah Graham (18 games), Lara McSpadden (14) and Kimberley Hodge (five) all coming off the bench in each of their games. This will be a tough one for the Flames to repeat, coming into the round with a five-game losing streak, but they will be confident to knock over the Flames two days prior. The Flyers are a hard team to beat and finished top of the table for a reason, so expect them to take this game out.

The final game of the WNBL regular season pits top two side, Melbourne Boomers up against fifth placed Perth Lynx. The Boomers simply have to win this game because a loss could see them slip to third spot on the table. Luckily they will know where they stand with the third placed UC Capitals taking on the Adelaide Lightning earlier in the day. If as expected the Capitals get up in that clash, then they will temporarily take second spot. Melbourne has to win this game to lock up second spot again, with a far superior points difference. If they lose and slip to third, it means they will face the Capitals in Canberra, twice, which is something no side wants to do given the Capitals’ 9-1 record with a loss to Southside Flyers the only blemish. By winning this match, Melbourne gets the two home finals, and can try and utilise the 6-3 home record to best effect. In saying that, the Boomers had the same opportunity against the Lightning last year and lost in Game 1, going out in straight sets. Melbourne defeated Perth by nine points here in early December, before facing off a week later back in Perth where the Lynx returned the favour. Perth are also playing a second game two days earlier, so it will be interesting to see how they manage the load in the final round and the confidence they take from that clash. This season has been about Melbourne’s big duo of Ezi Magbegor (13.2 points, 6.4 rebounds and 1.1 blocks) and Cayla George (14.4 points, 8.3 rebounds, 3.9 assists, 1.5 steals and 1.3 blocks) who hold the key to both offensively and defensively hurting opposition teams. The Lynx have a number of players who can stand up and match them off the boards or around the court, with Ariel Atkins (9.9 points, 4.8 rebounds and 1.6 steals) and Nadeen Payne (10.3 points, 4.5 rebounds) among those who have the talent to impact a contest. Melbourne has to win to give itself a realistic chance of the WNBL title, and lock up second spot, so expect them to do just that, in a competitive game.