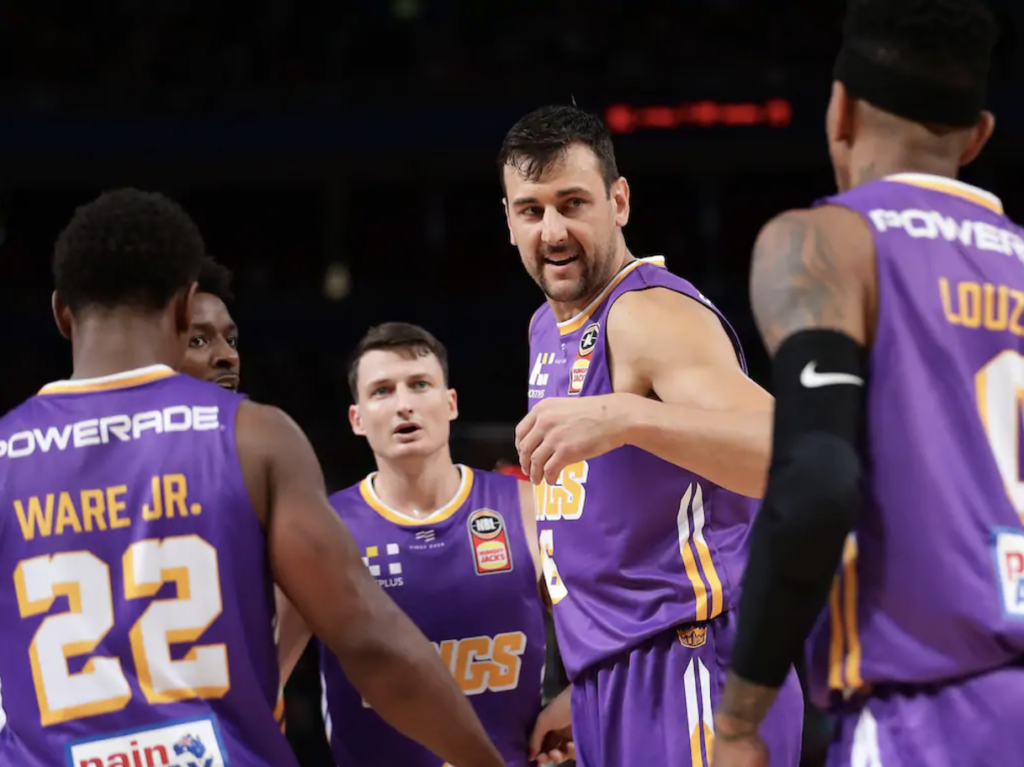 THE Sydney Kings were one of the three teams that tied for first position in 2018-19 alongside the Perth Wildcats and Melbourne United. Unfortunately, due to percentage the Kings would have to settle for third position and relinquish home court advantage, and they would lose their semi-final series to United 2-0.

This season, however, Will Weaver’s side would take no luxuries, as for the first time in NBL history, a single team would remain at the top of the League’s standings from the first round to the last.

From start to finish

Sydney Kings would begin their season from the get-go, as they would fight hard for an eight-point away win against the Taipans. Following this, a convincing 22-point demolition of the 36ers would quickly establish the Kings as the League’s benchmark and the team to beat throughout the season. It would not all come so easily to the Kings, which was evidenced by their back-to-back series against the Breakers. A team that would finish the season in sixth would push Sydney to the limit across eight quarters. Nevertheless, the Purple and Gold would prevail in both contests, extending their unbeaten start to the season to four.

Sydney’s first downfall came from an old foe, as once again United would come out on top as a result of a 107-104 battle down at Melbourne Arena, reminding the Kings of the pain they endured in last season’s semi-finals. Not only was Sydney’s win percentage throughout the season impressive, it was their ability to bounce back from a loss and stick to their guns. This was evident following their first loss of the season. Firstly, a 10-point win over the Bullets would provide valuable momentum to the Kings as they would face the second of the League’s best two sides two days later.

The first contest between the Kings and Wildcats was a close affair at first with Sydney up by just three points. But thanks to rookie Brazilian, Didi Louzada (28 points and six rebounds), an exemplary second half from the Kings would ensue, as they outscored Perth 55-39 in the last two periods, solidifying themselves as the League’s top dogs. Another three contests would be won in a row to cap off one of the best starts in the NBL’s history, holding a record of 11 wins and one loss after 12 games.

Over the next two games for Sydney, however, would not be so kind due to losing back-to-back games to the Taipans and the Wildcats in their rematch at RAC Arena, which started to bring up questions of whether the Kings could hold their own against the other top teams in the finals conversation. Sitting atop of the standings with an 11-3 record, the two-horse race between themselves and the defending champions from WA had started to heat up, as for the rest of the regular season, the Kings would have the Wildcats nipping at their heels week after week.

A 2-3 start to the second half of the season would make things a little harder for the Kings, going down to the Wildcats again (bringing their season series to 1-2), the Bullets and the bottom-seeded Hawks in a game that fell through their grasp like wet sand. If the Kings were to secure the top-seed and earn home-court advantage through the playoffs, a strong push would be needed for their remaining five matchups and one factor remained a constant on the route to the top-spot.

Sydney’s ability to win on their home floor would provide much needed leeway in the standings because the Kings’ road record was not impressive. At 8-6 away from home, Sydney’s home record was what separated themselves from the Wildcats, losing just twice at Qudos Bank Arena through the 28 games. Their home record would come up big for them once again through their final nine games as they would win all five home encounters in the final stretch, which coupled with two away victories to help Weaver’s team secure the League’s number one seed with a season record of 20 wins and eight losses.

For the second straight season the Kings would matchup with Melbourne United in this season’s NBL semi-finals, but this time it would be the Kings that would hold the home-court advantage.

Following a slow first three quarters where United would limit almost all of Sydney’s major weapons, whether it would Casper Ware’s shooting efficiency, Andrew Bogut’s inside presence or Jae’Sean Tate’s effectiveness from the wing. Despite this, the Kings would pull off one of the biggest comeback efforts in front of more than 13,000 people at Qudos bank Arena. One of Will Weaver’s strengths when it comes to his sides, is their massive amount of depth across the roster, and Game One of the series would prove this once again, as standout performances would come out of Xavier Cooks (13 points, nine rebounds and four assists), Brad Newley (17 points and five rebounds) and Didi Louzada (eight points in 16 minutes) who would come up big down the stretch. While Tate did find his stroke late in the game with 23 points and five boards, without the help of their secondary unit United certainly would have taken Game One.

Game Two was an entirely different story, however, as Melbourne was more than a little angry, due to the 16-point lead they blew two days earlier and they were itching to make amends. While the game would seem innocent after ten minutes of play, United would turn on the gas over the next two quarters scoring 77 points in the next 20 minutes. As a result, Melbourne would score 38 straight points at one stage of their run, as well as being in front by as many as 58 points, therefore quashing any possibility of a late comeback, as United would take out the debilitating contest 125-80.

But once again, Sydney’s ability to fight back on their home floor would be on display, as Game Three returned back to New South Wales for the deciding game. With both sides winning quarters leading into the main break. United had the slight edge as they led by five following a strong second quarter and it was well documented that marquee Guard and ex-Melbourne United player, Casper Ware, was not performing at his usual rate up until Game Three. But the import would pick up his game with 15 points and four rebounds, which was further aided by Tate’s 20 points which proved to be important late in the game. The Kings would tie up the contest by the end of the third quarter, setting the crowd up for a Win or Go Home final quarter. With defence being the major talking point all game, one of the teams had to break away, and with Tate once again proving to be the factor by making a jump shot with 84 seconds left in the game to put the Kings up by four, it turned out to be enough to get Sydney over the line against their long-time rivals. They would hold on to win the nail-biter 89-87 and move on to the Grand Final series to face the Wildcats.

Even though the Kings had proven on numerous occasions that they were the best performing team in the competition following the 20 rounds, not everyone was convinced that the Kings could topple the reigning champs. Throughout the four encounters of these two teams, Sydney had only defeated Perth on one occasion, which sparked an abundance of doubt from punters and spectators alike. Nevertheless, the spectacle of game One proved to be a treat for all that attended as they observed a highly competitive contest.

With both teams trading quarters and leads, it was only three points the difference at the end of the first half, with the Wildcats just holding their noses in front. However, the Kings would hit back hard with a strong third quarter leading by five with ten minutes remaining. But behind their MVP, the Wildcats would have the last run of the game, outscoring the Kings 20-13 in the last quarter, taking Game One on the road by 88-86. Bryce Cotton’s 32 points, six rebounds and four assists would set the tone for a stellar series individually.

Following new COVID-19 restrictions, the dynamic of home court advantage would change as a minimal amount of people would attend games, and given the result of Game Two, this became very relevant as strong first and fourth quarters saw the Kings tie up the series 1-1 in a very quiet RAC Arena, as Bogut, Tate and Kevin Lisch combined for 58 points in Sydney’s 97-83 win leading into Game Three. With the new restrictions, they would soon giveth and taketh away as the lack of supporters would also work in favour of the Wildcats, following a 29-18 opening period, which seemingly deflated the Kings from the beginning. Because of this, 61 points from Cotton and Nick Kay would beat down on the Kings’ defence earning them the easy 2-1 series lead.

As the NBL would decide to anti-climactically end the series due to the newly introduced lockdown restrictions after three games instead of the conventional five games, and much deliberation, by default the Wildcats were awarded their second title in a row ending the Kings seemingly unstoppable campaign.

For many occasions, Casper Ware was the reason for a lot of Sydney’s success. However, when it came to moments at the tail end of the regular season, Ware would appear absent in times that mattered. This became apparent in the semi-final series against Melbourne United, as shooting became seemingly difficult for the star Guard. This would also carry over into the Grand Final series against Perth, as Cotton found the freedom to explode onto the scoreboard compared to his opponent.

Nevertheless, Ware’s numbers remained impressive as he positioned himself sixth amongst the League’s leading scorers averaging 19.7 points a game, alongside almost four assists a game. These efforts would earn him another All-NBL Team nomination putting him in good stead for the upcoming season.

On the many occasions Ware has been absent from the floor, Jae’Sean Tate has made a name for himself this season as one of the NBL’s premiere wing players through his athleticism and accuracy. Shooting at a remarkable 66 per cent from the field and averaging 16.4 points per contest, Tate’s offensive prowess was almost unmatched amongst other players in his position. He also made himself known on the glass grabbing 5.8 rebounds per encounter. For a debut season earning an All-NBL First Team selection, he may very well have a stellar career in Australia’s top-flight should he choose to sign an extension with a club that is hungrier than ever for championship success.

Coming off an MVP season in 2018-19, it was going to be hard for Andrew Bogut to improve his game. The 35-year-old took some of the load off himself in NBL 2020, shaving off minutes and points as a result. While Bogut’s numbers might have dwindled, his efficiency remained high, as his field goal percentage went up to 59 from 56 the previous season. He would also go on to average 8.8 rebounds a game, remaining a dominant force in that category and average a modest 8.2 points too.

Because of Bogut’s injury woes this season, the club forced him to manage his output and court-time. This has led the veteran to consider what his future does look like, as he has stated how difficult this season has been on him physically and mentally, so we will have to wait and see what the big man does leading into next season.

The Coach’s corner: Will Weaver

As a result of their disappointing yet necessary series defeat following Game Three, Weaver spoke at length at Triple M on behalf of his side thanking the city, and how lucky he felt to be a part of the process, despite the way the season had ended.

“Thank you guys so much for your support throughout the season and I’m so proud of the city of Sydney and to be a part of this city being embraced the way that we are, and by people that haven’t been a part of our program previously,” he said.