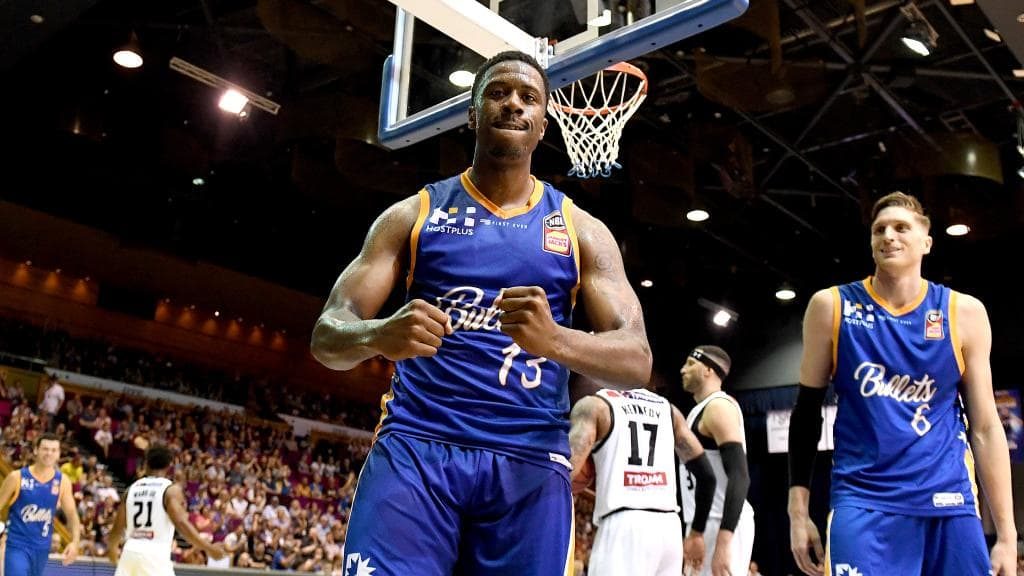 WITH one game down and still plenty of action to come over the weekend, we preview Round 7 of the National Basketball League (NBL), with a wrap-up of these games and preview of the final game of the round on Monday.

In just seven rounds, the third Throwdown will take place with the winner to emerge as the overall series leader given the teams are tied at 1-1 from the first two encounters. In Round 1, the Phoenix got up over their established rivals, before Melbourne United managed to level the head-to-heads with a great win earlier this month. There is plenty on the line for both sides, with Melbourne sitting third and South East Melbourne in fourth, but have two games in hand. United look a completely different side to the one that was 1-4 to open the season, having strung together four consecutive victories to move out of the bottom two and into the top four. They are the most in-form side in the competition, and a win here would give them a much needed breather on their cross-state rivals. The Phoenix on the other hand need a win in order to force their way back into the top three, and will be keen to seek revenge after suffering their first loss to United.

Looking at the statistics so far, Shawn Long has had an absolutely stunning season for his new side since crossing from the Breakers. Long has posted 21.9 points and 10.4 rebounds to be the dominant center of the competition alongside Andrew Bogut. Fellow recruit, Melo Trimble has also been building in recent weeks averaging 21.7 points, 4.6 rebounds and 4.7 assists per game. The steadying influence of Chris Goulding (21.0 points) and Mitch McCarron (11.3 points, 6.1 rebounds, 3.2 assists and 1.8 steals) cannot be underestimated either. For the Phoenix, it is no surprise to see Mitch Creek up near the top when it comes to dominant points scorers. The former NBA player has averaged the 21.0 points, 7.1 rebounds, 4.3 assists and 1.1 steals per game. John Roberson (20.1 points, 5.7 assists) and Ben Madgen (12.1 points, 5.9 rebounds) are a couple of others averaging double-figure points, while Dane Pineau has had an underrated season with 7.3 rebounds to accompany his 8.1 points and 1.6 blocks per game.

Melbourne United’s form is hard to look past, but the Phoenix are a quality side, so this will go down to the wire.

The Saturday night game might not have the expectations of its Saturday evening counterpart, but there is still plenty on the line for the Queensland sides as they battle it out in a ladder-defining clash. Brisbane is on the verge of a top four berth and is a 22-point differential behind fourth placed South East Melbourne Phoenix. If United get up and the Bullets can win this game, then they could well sneak into the top four. A big win (or big loss to United) could also see them overtake Melbourne instead, if they can manage it. For Cairns, they have struggled to start the season, sitting at 2-6 from eight games with the positive being that the ladder is still very even outside the consistent Kings, and a win would put them right back into contention. Both sides are coming off losses – the Taipans having lost the past two – so they will be keen to bounce back. Cairns is 1-2 at home, while the Bullets are 2-3 on the road, so heading up to Cairns might have some worries for them. These sides have already played once this season, with Brisbane getting the job done back in Round 2.

A man mountain who has been throwing his weight around this season is Cairns Taipans’ forward Cameron Oliver. The 203cm and 102kg forward has put up 17.8 points, 7.3 rebounds and 1.3 blocks per game to be the clear standout in a so far underwhelming season for the Far North Queensland side. He, along with Scott Machado (14.0 points, 7.5 assists, 3.8 rebounds and 1.3 steals), Majok Deng (13.5 points. 5.0 rebounds) and Kouat Noi (10.3 points, 6.4 rebounds) have held their own throughout the season thus far. The clash between Oliver and Brisbane star Lamar Patterson will be a fascinating one, with Patterson one of the standout performers this season across the court. He can match Oliver with his 196cm and 102kg frame, sinking 18.8 points, 6.3 rebounds, 4.8 assists and 1.0 steals from his eight games. Speaking of man mountains, there is not many bigger than 211cm, 115kg center Matt Hodgson who will no doubt cause some problems for the opposition coaching box. He averages 11.3 points and 4.4 rebounds per game, while former 36ers guard, Nathan Sobey has had a solid introduction in the Sunshine State with 15.8 points, 4.5 rebounds and 3.0 assists.

Cairns has shown promising signs at times this season, and at home will give it a real shake, but Brisbane’s big two in Patterson and Sobey might have the ultimate say on this contest.

The two sides at opposite ends of the ladder are facing off in the first of two Sunday games. The Sydney Kings are on a hot streak this season, with only a narrow loss to Melbourne United ruining an otherwise perfect start to the season. The Kings are cruising atop the NBL ladder, winning eight of a possible nine games, including an unbeaten streak of four at home and won their past two after six in a row to open the season. They are a massive plus-88 in points differential clear of Perth Wildcats in second, so there is not much chance at slipping down the ladder. The Kings have been well drilled this season and should eye this game as a simple must-win. The Hawks have only just got over the line a couple of times, winning two of a possible nine games, both of which have come against second last placed Cairns. They are just one win from four on the road, which does not bode well against a massive opponent that has struggled to lose even when on the ropes. They have not played so far this season, with Illawarra upsetting the Kings way back in January – not once, but twice – including in Sydney.

There have been no shortage of performers for the Kings this season, with Casper Ware standing up in his new colours, averaging 20.2 points, 2.9 rebounds and 3.7 assists per game, working well with fellow American, Jae’Sean Tate who has used his height to advantage on his way to 14.0 points, 6.0 rebounds and 2.0 assists per game. NBA Next Generation Academy star, Didi Louzada has been building nicely of late and the Brazilian born big man has complemented the team nicely. Throw in the work of Bogut – who has averaged 8.2 points, 10.4 rebounds and 1.4 blocks per game, and it is easy to see why this team is on top of the ladder. They often run the court rather than look for too many assists, but are strong off the boards to deliver second chance points, and deny their opposition up the other end. All the talk this season was about teaming up American NBA and future NBA players Aaron Brooks and LaMelo Ball respectively. While Brooks’ season unfortunately ended early due to injury, he has still had an impact, averaging 17.9 points and 4.1 assists prior to that. It will now place more expectations on the shoulders of the incredibly talented, but lightly built Ball, who at 198cm and 82kg and the grace and agility of a small man, has been sensational at his best, with 14.6 points, 7.0 rebounds, 6.0 assists and 2.0 steals. Unfortunately for Illawarra, there has not been enough consistency across the board in terms of individual efforts, with Todd Blanchfield and Andrew Ogilvy averaging the next most points with 9.7 and 8.8 respectively.

Sydney should win this one fairly comfortably, and it would take a massive Ball effort for Illawarra to cause an upset.

Perth will revel being back at home after Friday night’s game, hosting New Zealand Breakers in this contest. The Wildcats will head in as favourites given New Zealand’s inability to win on the road. The Breakers are yet to salute from three attempts, while Perth has won three of its four home games – a loss to Cairns at RAC Arena the only blemish. You do not have to go too far back to see these sides facing off, with Perth heading across to New Zealand in Round 5 and returning home with a five-point win in the bag. A victory would keep the sides chasing the Wildcats at bay, though a win for New Zealand is incredibly important in order to stay in touch with the top six.

The Wildcats will know what to expect from their ‘Big Two’ in Bryce Cotton (22.3 points, 4.5 rebounds, 4.4 assists and 1.8 steals) and Terrico White (16.3 points, 3.4 rebounds and 1.9 assists). Though it could be argued that Nick Kay is providing ample support as a forward, posting 13.2 points and 7.6 rebounds per game, teaming up well with Dario Hunt (9.6 points, 6.1 rebounds) with both big men standing at a hard to beat 206cm and 104kg. While the Wildcats have their fair share of American talent, the Breakers just keep finding them. With Scotty Hopson‘s injury threatening to derail their season the New Zealand side picked up Glen Rice Jr who in his two games has already had a big say, posting 22.5 points, 4.5 rebounds, 2.0 assists and 1.5 steals, which while the Breakers lost both games, showed what he can offer on the court. Corey Webster has been sensational all season, averaging 19.4 points, 4.0 rebounds and 4.9 assists for the Breakers, while RJ Hampton is another Next Gen Academy member with some big wraps, averaging 9.9 points and 4.5 rebounds per game, but more importantly 1.5 steals per match. British forward Brandon Ashley stands at 206cm and has played an underrated role, averaging 13. points and 7.5 rebounds per game.

Perth should get up in this one without too many worries, but it is never a sure thing in this competition.