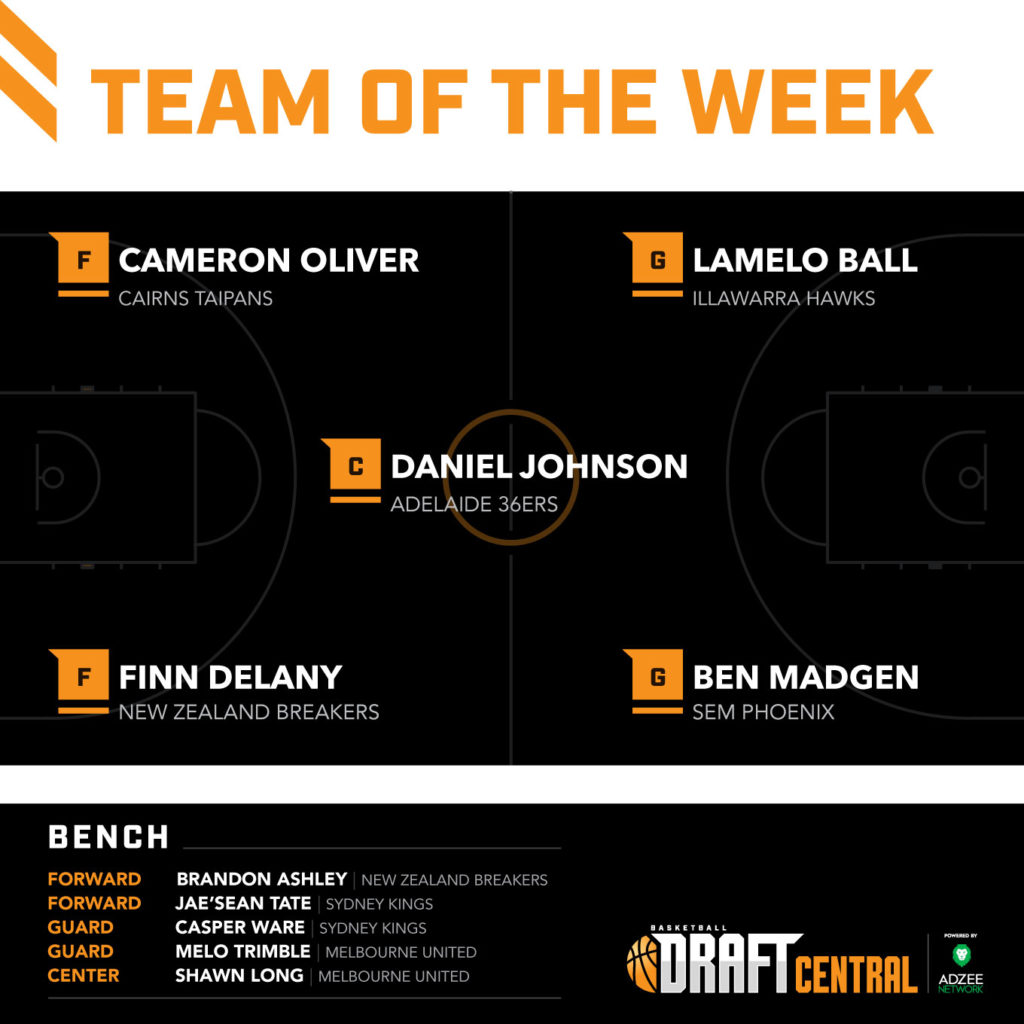 THREE National Basketball League (NBL) teams recorded two or more players in the Draft Central Team of the Week for Round 9, with Sydney Kings and New Zealand Breakers both enjoying good wins, while Melbourne United went down in two games but still performed strongly. South East Melbourne Phoenix, Adelaide 36ers, Cairns Taipans and Illawarra Hawks all had one player each in the team, while Perth Wildcats and Brisbane Bullets did not register a player in the team after losses this weekend.

New Zealand had an impressive victory over Illawarra Hawks, with Finn Delany (20 points, 10 rebounds, one assist and one steal) recording a double-double to make Team of the Week. He was only overshadowed by Illawarra Hawks’ young gun, LaMelo Ball who recorded his second consecutive triple-double with 25 points, 12 rebounds and 10 assists, while Delany was joined by teammate Brandon Ashley. The Sydney Kings also had a couple of players make the team on the bench with Casper Ware and Jae’Sean Tate both putting out impressive games in a competitive week for spots.

Adelaide 36ers’ Daniel Johnson was named in the center position this week, producing the second best performance of any player over the weekend as he lead the 36ers to an upset win over Perth courtesy of 29 points, 17 rebounds, two assists and one steal. Also in the starting side was South East Melbourne Phoenix’ Ben Madgen (23 points, four rebounds, six assists and one steal) and Cairns Taipans’ Cameron Oliver (17 points, 12 rebounds and three blocks).

Looking to the bench and rounding out our Team of the Week were a couple of Melbourne United players who earned a spot with Melo Trimble and Shawn Long in the side again. There were quite a few unlucky players to miss out this round with New Zealand’s Sek Henry, Adelaide’s Jerome Randall, South East Melbourne’s Mitch Creek, Brisbane’s Lamar Patterson, Cairns’ Scott Machado, Perth’s Bryce Cotton and Melbourne’s Chris Goulding.