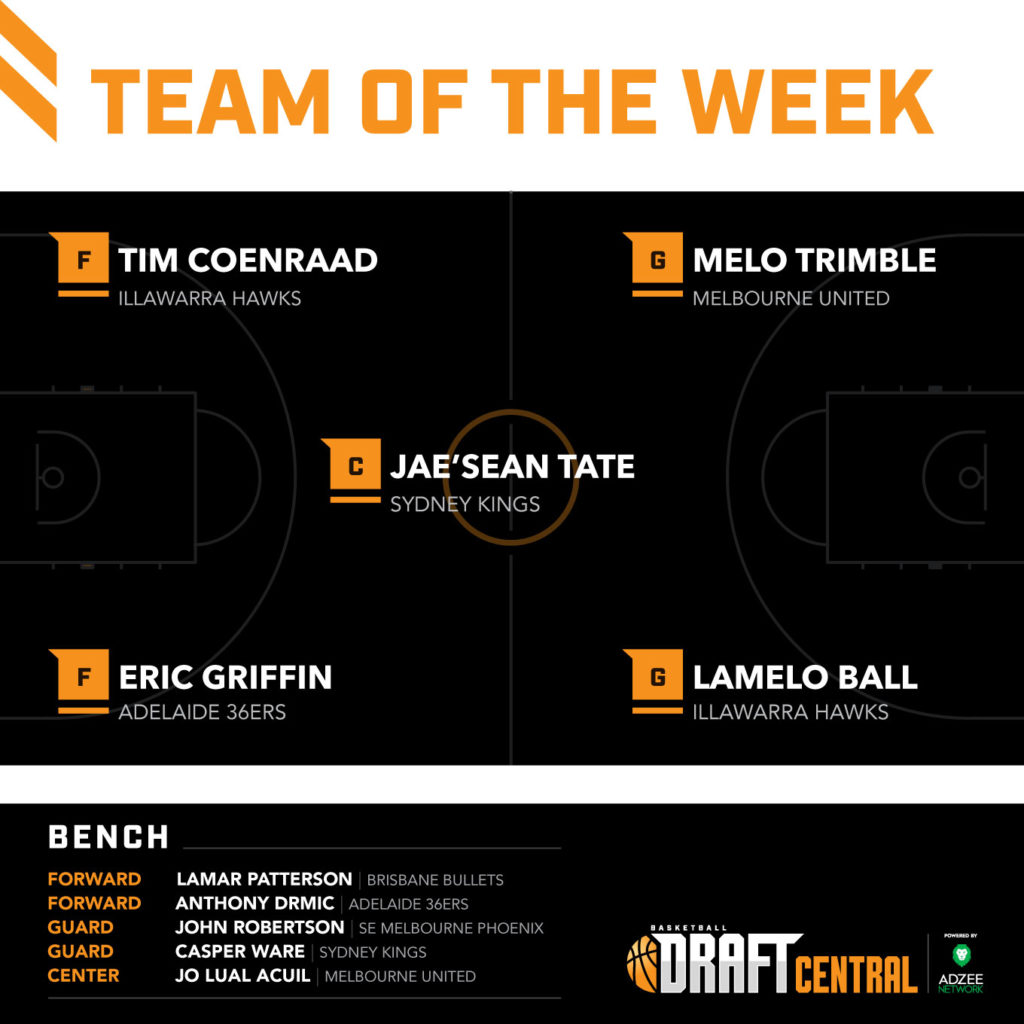 ROUND 8 seemed to be dominated by forwards with a host of players standing up for their respective sides and putting their hand up for selection in Draft Central’s National Basketball League (NBL) Team of the Week. The Sydney Kings were once again well represented in the team credit to a strong performance seeing with the Illawarra Hawks equalling them. For the first time in weeks the Perth Wildcats missed out on selection thanks to an upset loss to the lowly Cairns Taipans.

It was hard to go past the performance of Tim Coenraad who rose to the occasion against a gallant Cairns side with the forward owning the court with his scoring ability racking up 27 points for the game along with two rebounds and two assists. Eric Griffin also impressed over the weekend with the forward taking control on the scoreboard for the Adelaide 36ers across both matches. He simply could not be stopped using his big frame to push past opponents and find his way to the rim with a combined 42 points thanks to 18 points against the Bullets and 24 against the Breakers while teammate Anthony Drmic also played a key role. Lamar Patterson burst out of the blocks in his first game of the round hitting 27 points and six rebounds but tailed off in the second game pushing him to the bench for this week’s Team of the Week.

In a history making performance LaMelo Ball was a sure starter in our Team of the Week becoming the youngest player to record a triple double with 32 points, 11 rebounds and 13 assists. His performance was nothing short of impressive forcing the likes of Casper Ware who continued his hot form to the bench. Ware made no mistake near the ring sinking 25 points while Melbourne United’s Melo Trimble secured his spot in the Team of the Week once again with a dominant performance. Much like Ware, Trimble nailed 25 points along with seven assists and five rebounds giving him the other starting guard position Although South East Melbourne Phoenix dropped their third game in as many weeks, John Roberson was still influential across the court with his dynamic game style and drive to the basket scoring 25 points against the top of the table Kings.

For the second week in a row Jae’sean Tate made the cut thanks to his classy performance to help get the Kings over the line. He had no issue finding the basked sinking 24 points for the game while used his height to position under the rim. Jo Lual Acuil was narrowly edged out of the starting position instead finding himself on the bench after a strong outing for Melbourne United with a game high 15 rebounds.

Unlucky to not make the cut was South East Melbourne Phoenix gun Mitch Creek who was once again instrumental across the court with his 20 points and seven rebounds, while Kouat Noi also just missed out after a solid performance for Cairns.