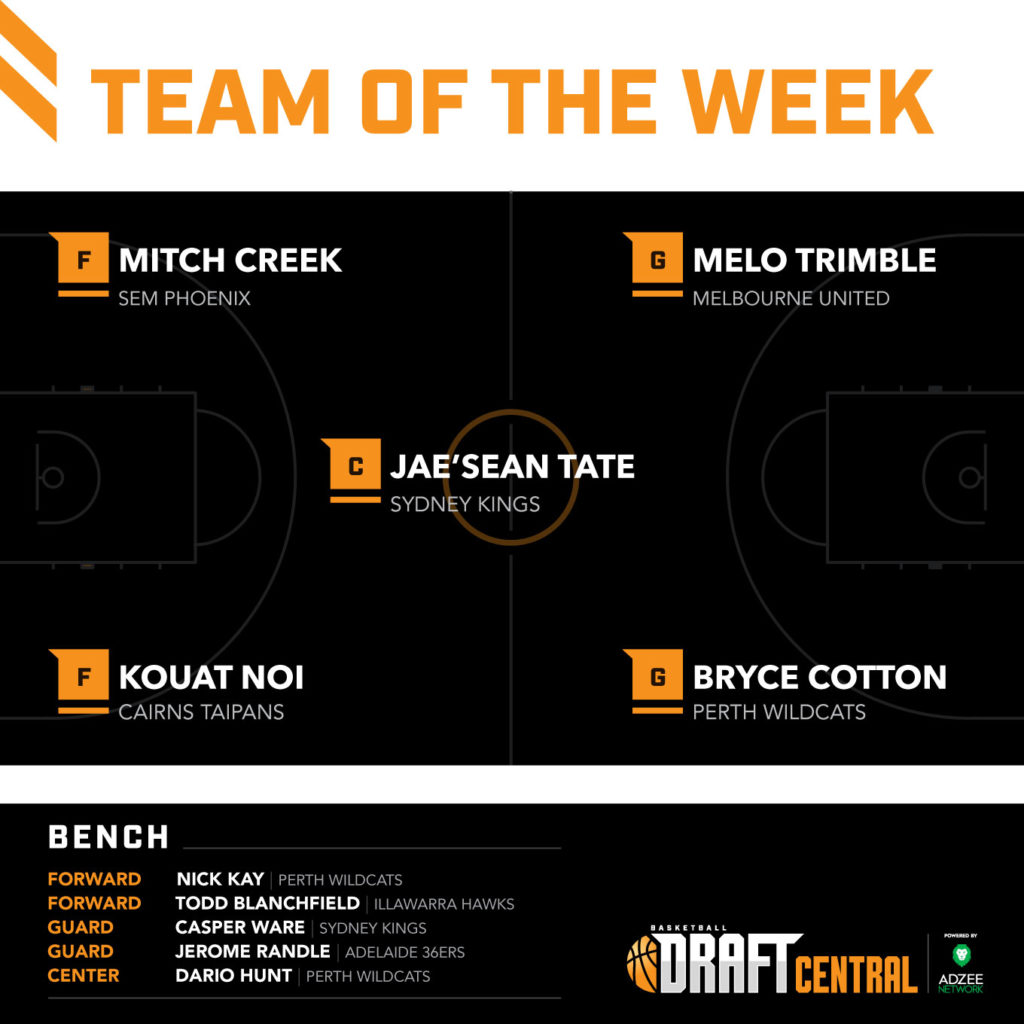 IT was another week of tight games and individual match winning performances making the selection for Draft Central’s National Basketball League (NBL) Round 7 Team of the Week challenging. South East Melbourne Phoenix and state rivals Melbourne United only had one nomination each. With two wins under their belt from the round, reigning premiers Perth Wildcats have the most representatives of any side in the league with three, while the Sydney Kings are hot on their heels with two.

Despite not mustering up a win this round, fan favourite and the ever skilful Mitch Creek earned a spot in the side credit to his dominant performance in both games across the round. Creek was pivotal in the clash against cross-town rivals United with 27 points, seven rebounds and three assists while also securing a double double (22 points, 11 rebounds) in the Phoenix’s loss to the Adelaide 36ers. The other starting forward is Kouat Noi who stood tall in his sides strong win with a double double courtesy of his 20 points and 10 rebounds. Nick Kay was instrumental in the first game of the round for the Perth Wildcats unstoppable up and down the court with 21 points, eight rebounds and four assists but fell off the points radar in the second match only amassing four but still played his rebounding role with eight pushing him to the bench. Todd Blanchfield was a shining light for the Illawarra Hawks despite not winning he plied his trade with a convincing performance against the top of the table Kings sinking a team high 22 points.

Jae’sean Tate was the talk of the town with a strong outing for the Sydney Kings posting a game-high 24 points, seven rebounds and three steals highlighting his ability to switch between offence and defence with ease. The forward secured his spot in the starting five thanks to his efforts edging out by Dario Hunt who found himself on the bench after a solid performance for the Perth Wildcats with a combined 29 points, 11 rebounds and three assists across the two games. Unlucky to not make the cut was Sydney Kings big man Andrew Bogut who once again controlled the airways with nine rebounds and five points along with Shawn Long who was down on his lofty standards.

It is hard to go past the likes of Melo Trimble who showcased his nerves of steel to sink the winner from the free throw line and grant United the win. That match winning point accompanied his 21 other points and five assists to earn him a spot in this rounds Team of the Week. It is hard to go past the efforts of Bryce Cotton who once again turned on the afterburners and showcased his supreme class with a whopping 34 points against New Zealand Breakers to accompany his 18 against Adelaide earlier in the round. Casper Ware impressed in the Kings win weaving his way around the court and finding the net with ease amassing 21 points along with seven rebounds while Adelaide 36ers guard Jerome Randle turned the clock back imposing himself on the court and pushing his side to victory in the second game with 27 points, three rebounds and four assists.