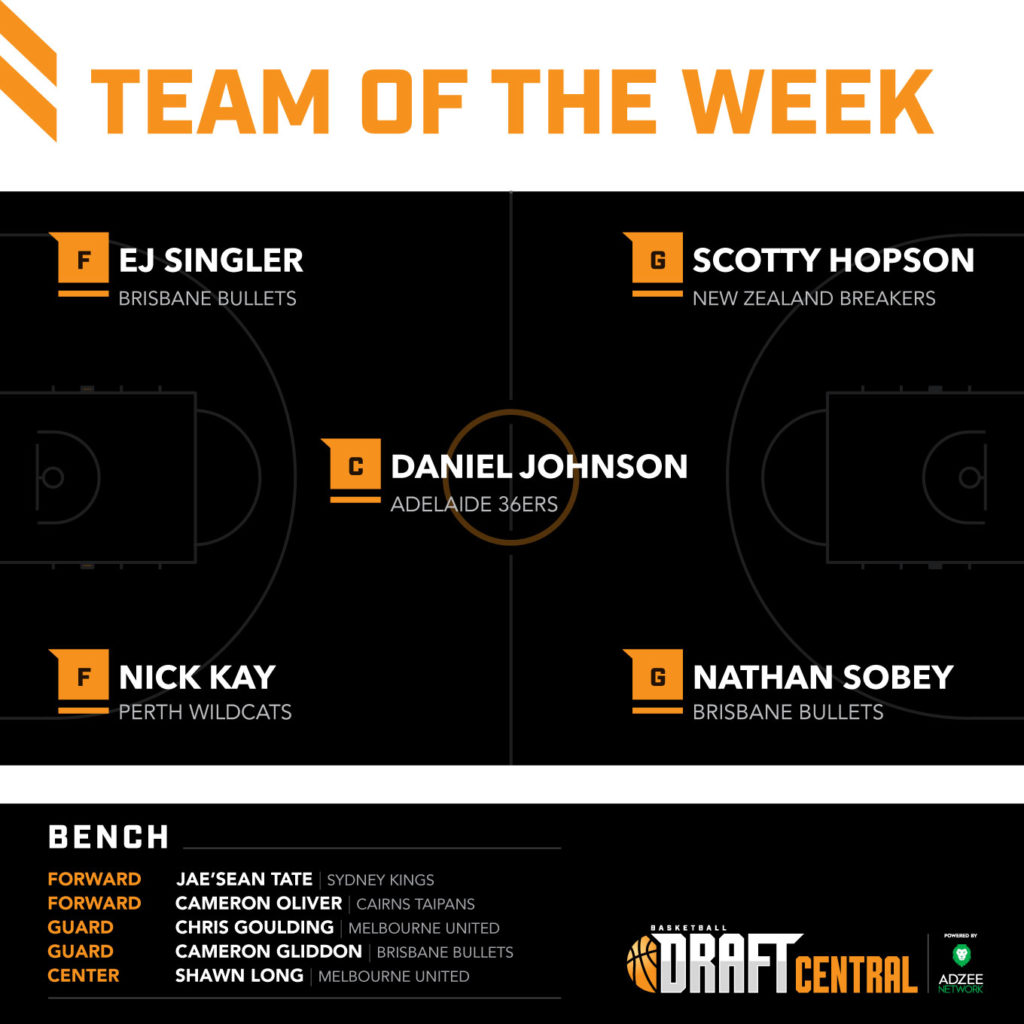 TWO teams fighting over fourth spot in the final round earned multiple Draft Central National Basketball League (NBL) Team of the Week player nominations for Round 20. Both Brisbane Bullets (three) and Melbourne United (two) had multiple players in our team for the final round of the season, while five other sides – those in the top seven – had one apiece, with just South East Melbourne Phoenix and Illawarra Hawks missing out on a player for the last round.

Brisbane’s trio of players included two starters in Nathan Sobey and EJ Singler. Sobey put up 30 points, six rebounds, six assists and two steals in the Bullets’ win over Cairns Taipans, while Singler sank 21 points, and had nine rebounds, six assists and three steals with the second best shooting percentage of the starters with 64.3. Also on the bench is Brisbane’s Cameron Gliddon, who made the side along with Melbourne United duo, Chris Goulding and Shawn Long; those two were named in the guard and center position on the bench respectively.

The other starting guard is New Zealand’s Scotty Hopson, with a double-double effort in the Breakers’ win over the Phoenix, recording 23 points, 10 assists, five rebounds and a steal, while up the other end of the court, Perth Wildcats’ Nick Kay cemented his spot in the starting line-up thanks to 23 points, seven rebounds, two assists, two steals and two blocks, with a shooting percentage of 66.7. Rounding out the starting team is Adelaide 36ers’ Daniel Johnson who had a double-double of 18 points and 11 rebounds, as well as three assists.

Looking to the bench, Cairns Taipans’ Cameron Oliver was a lone hand in a disappointing weekend for the third placed North Queensland side, named in the 10-player team with Sydney Kings’ Jae’Sean Tate – who had the best shooting percentage of anyone in the team thanks to 77.8 per cent from the field. There were a number of unlucky omissions from the side for Round 20, including Melbourne duo, Melo Trimble and David Barlow, Illawarra guards Sunday Dech and Angus Glover, South East Melbourne’s John Roberson and Tai Wesley, Cairns’ Majok Deng, New Zealand’s Robert Loe and Perth’s Miles Plumlee.