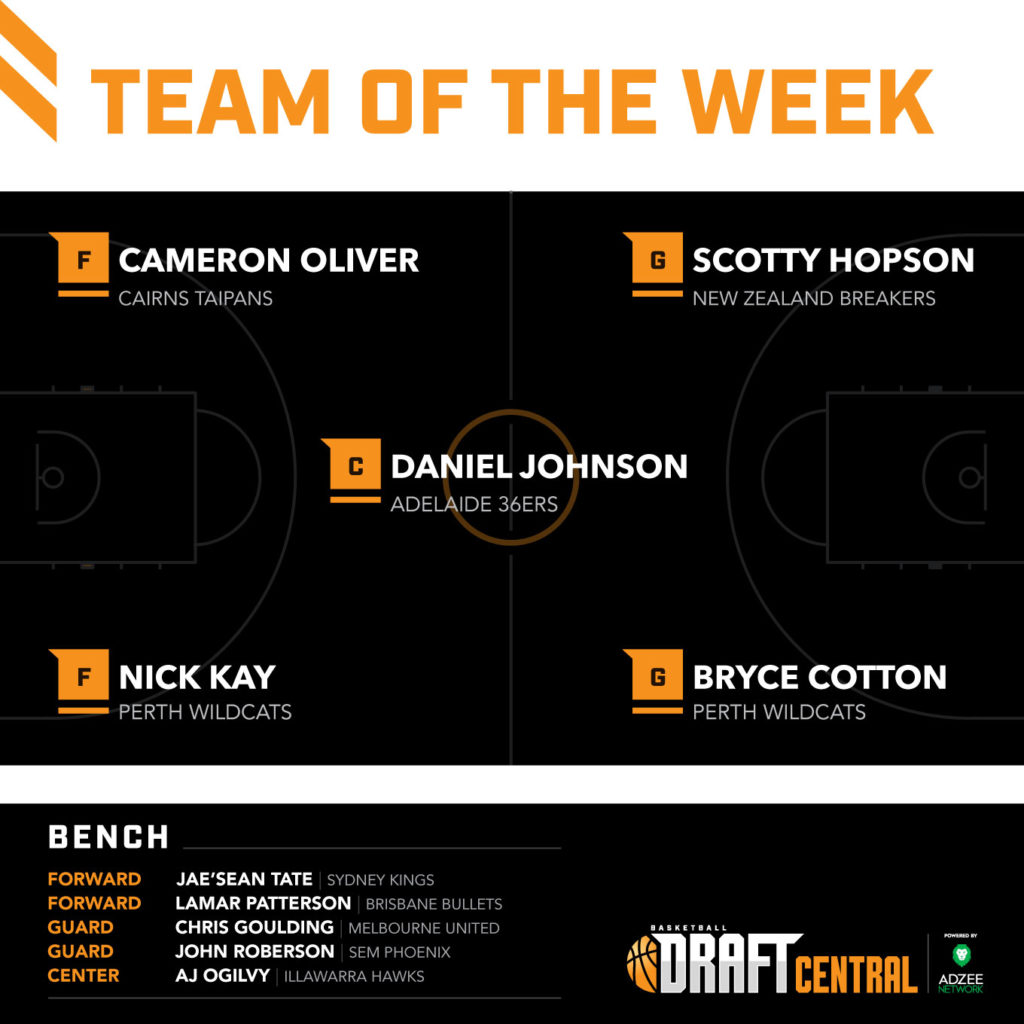 WITH a smaller total of five games and only the Brisbane Bullets running out onto the court twice in Round 19 of the National Basketball League (NBL), the Draft Central Team of the Week featured all the Player of the Match winners, with only the Perth Wildcats doubling up with two players in the 10-man team. Every other NBL side had one nominee in an even round of action for individual performances.

Perth had two starters in this week’s team, with regular performers, Bryce Cotton and Nicholas Kay making the cut. Cotton put up 25 points, six rebounds, five assists, one steal and one block over the weekend, while Kay finished with 23 points, eight rebounds, five assists, one steal and one block, shooting at 69.2 per cent from the field and earning Player of the Match honours in the win against the Bullets. For the Breakers, Scotty Hopson lit up the court in New Zealand’s win over Brisbane, picking up 31 points, seven rebounds, four assists and two steals.

Also picking up 31 points in Round 19 was Cairns forward, Cameron Oliver, who starts alongside Kay in this edition of the Team of the Week. Oliver finished his performance against Adelaide with 31 points, 11 rebounds, three assists, one steal, two blocks and a Player of the Match award, shooting at 61.9 per cent from the field. Rounding out the starting five is Adelaide’s Daniel Johnson who moves into the middle at the center position, following a 14-point, eight-rebound and five-assist game for the 36ers in their loss to the Taipans.

On the bench, Melbourne United’s Chris Goulding and Sydney Kings’ Jae’Sean Tate are the other two Players of the Match that made the squad, filling out one of the guard and forward spots each in the Team of the Week’s bench. South East Melbourne Phoenix’s John Roberson also features up the guard end, while Lamar Patterson squeezes into the forwards as the only Bullets player to make the team after back-to-back losses. AJ Ogilvy makes his Team of the Week debut this season and breaks the drought of Illawarra Hawks absences as of late.