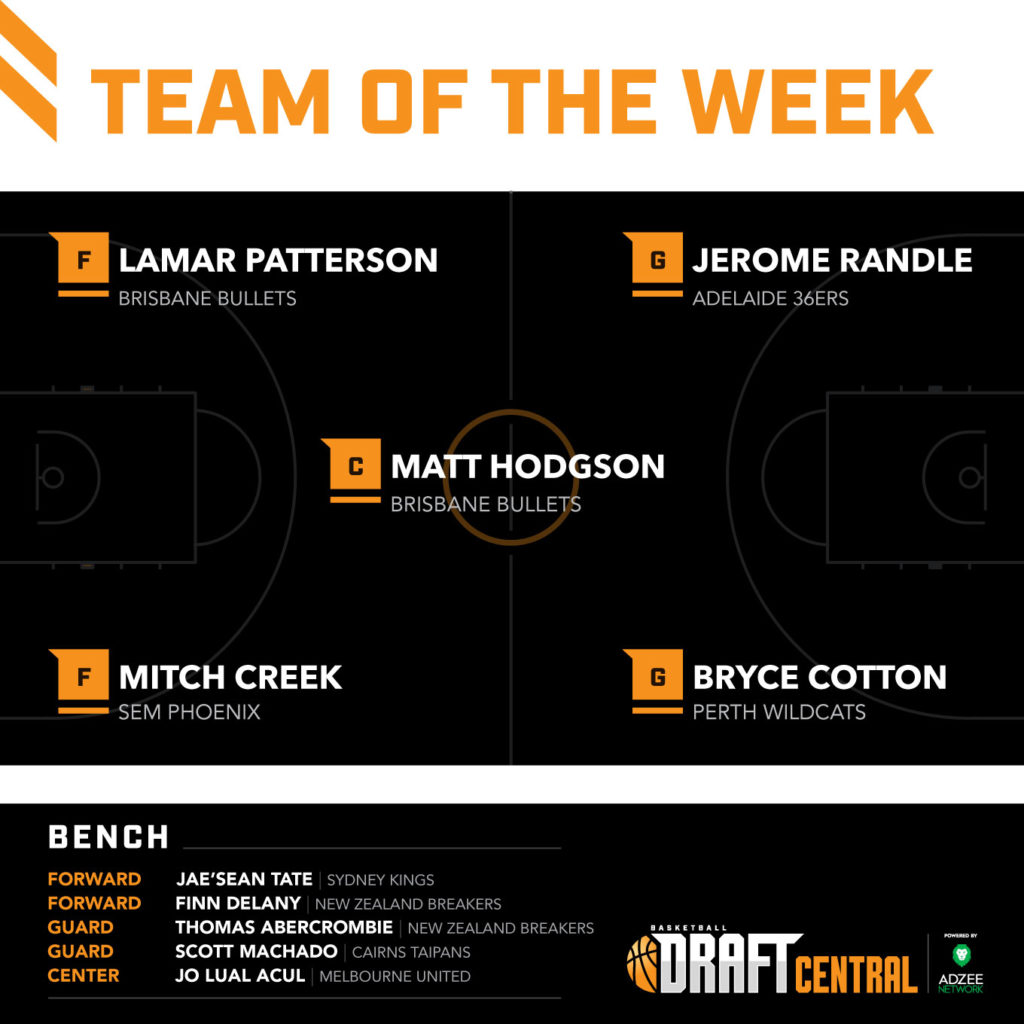 AN even spread of talented stars make up our Draft Central National Basketball League (NBL) Team of the Week for Round 18, with eight of the nine teams represented in the 10-player side. One game was called off early due to a leak in the roof, so performances from the New Zealand-Illawarra game was not taken into account as that would impact the averages of those players. Instead, we looked at those teams other respective games, though the Hawks missed out on having a representative this week anyway. The Breakers on the other hand had two, the equal-high for the round along with the Brisbane Bullets, while all other sides had the one representative.

Brisbane had two players in the starting team this round with center Matt Hodgson standing tall with a double-double of 14 points, 13 rebounds, two assists and two blocks, while regular Team of the Week representative, Lamar Patterson had yet another double-double thanks to 31 points, 12 rebounds, four assists and two steals in Brisbane’s win over Melbourne United. Joining Patterson in the forward half is Mitch Creek who returned to his best form with 27 points, 10 rebounds and five assists, while a pair of American imports regained their spots in the guard starting positions. Adelaide 36ers’ Jerome Randle produced 22.5 points, five rebounds and five assists across the two games, while Perth Wildcats’ Bryce Cotton helped himself to 25.5 points, three rebounds, three steals and two assists across the Wildcats’ two games.

On the bench, New Zealand has two players making the side with veteran Tom Abercrombie, and young gun Finn Delany both making the team. Joining them was Cairns Taipans’ Scott Machado and Sydney Kings’ Jae’Sean Tate, while Melbourne’s Jo Lual-Acuil made his debut appearance in the side this season. Though the 10 selected had some impressive games, there were a number of great individual performers who came close to selection. Perth’s Terrico White and Nick Kay, New Zealand’s Sek Henry, South East Melbourne’s John Roberson, Adelaide’s Daniel Johnson, Cairns’ Cameron Oliver and Melbourne’s Shawn Long all came close to making the final side.