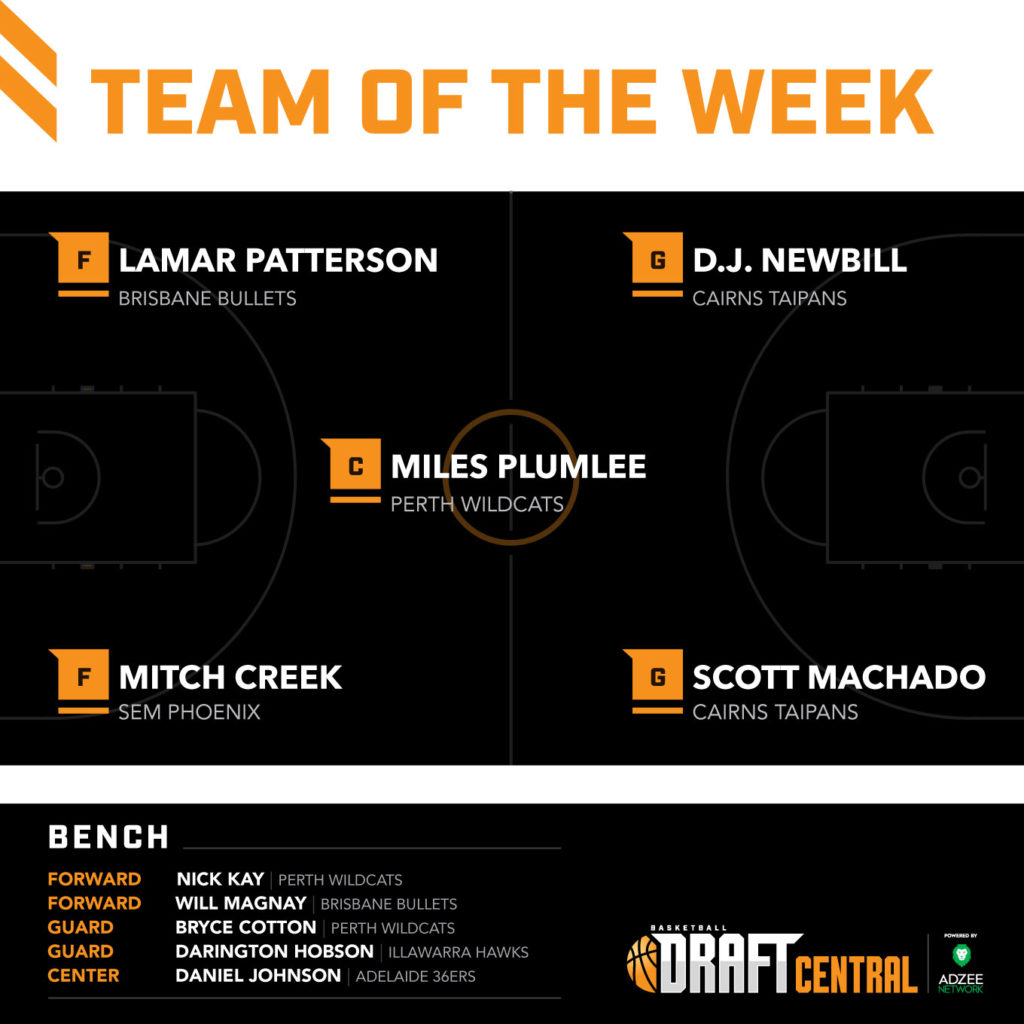 IN a strange round when it came to individual performances, only six of the nine teams recorded players in our National Basketball League (NBL) Team of the Week for Round 17. Despite Sydney Kings winning both matches, they had such a team effort that the individual performances were spread out, and narrowly missed out on spots, with Casper Ware and Jae’Sean Tate both coming close to making it in. New Zealand almost snuck a win but missed out despite the efforts of Brandon Ashley and Scotty Hopson, while Melo Trimble (Melbourne United) also missed out with his side not having a representative. Of the teams that did have representatives, Cairns Taipans, Brisbane Bullets and Perth Wildcats all had two after good wins, while South East Melbourne Phoenix, Adelaide 36ers and Illawarra Hawks had a player each in our Team of the Week.

Cairns Taipans’ run of form continued in Round 17 and both starting guards hail from the North Queensland outfit, with D.J. Newbill and Scott Machado making the side. Newbill posted 23 points, six rebounds, seven assists and one steal, shooting 72.7 per cent from the field, while Machado helped himself to 24 points, four rebounds, eight assists and one steal. Perth Wildcats’ import, Miles Plumlee took out the centre position, announcing himself on the NBL stage after limited game time in his previous outings. Plumlee absolutely dominated in Perth’s narrow win over New Zealand, putting up 23 points, 17 rebounds, two assists, two blocks and a steal, while shooting 73.3 per cent from the field. Teammate, Bryce Cotton also made the side but on the bench after a strong performance. Brisbane’s Lamar Patterson featured in the starting side yet again thanks to a round-high average of 28 points, 3.5 rebounds, 5.0 assists and 2.0 steals, with two games of 27 and 29 points over the weekend. He and teammate, Will Magnay – who was blocking everything in Round 17 – earned places in the 10-player side.

The final starter in our Team of the Week is South East Melbourne Phoneix’s Mitch Creek, who averaged a double-double over the weekend, with 22 points, 10 rebounds and four assists in two defeats. On the bench, Illawarra’s Darington Hobson makes his debut in the Team of the Week off the bench, while Nick Kay earned a spot as a forward after some near misses in the past, and Adelaide 36ers’ Daniel Johnson earned yet another place after a convincing performance on the weekend. His teammate Jerome Randle was one of the unlucky players to miss out, as was the Phoenix’s John Roberson, Cairns’ Cameron Oliver, and Brisbane’s Matt Hodgson who were all considered for a place in the side.