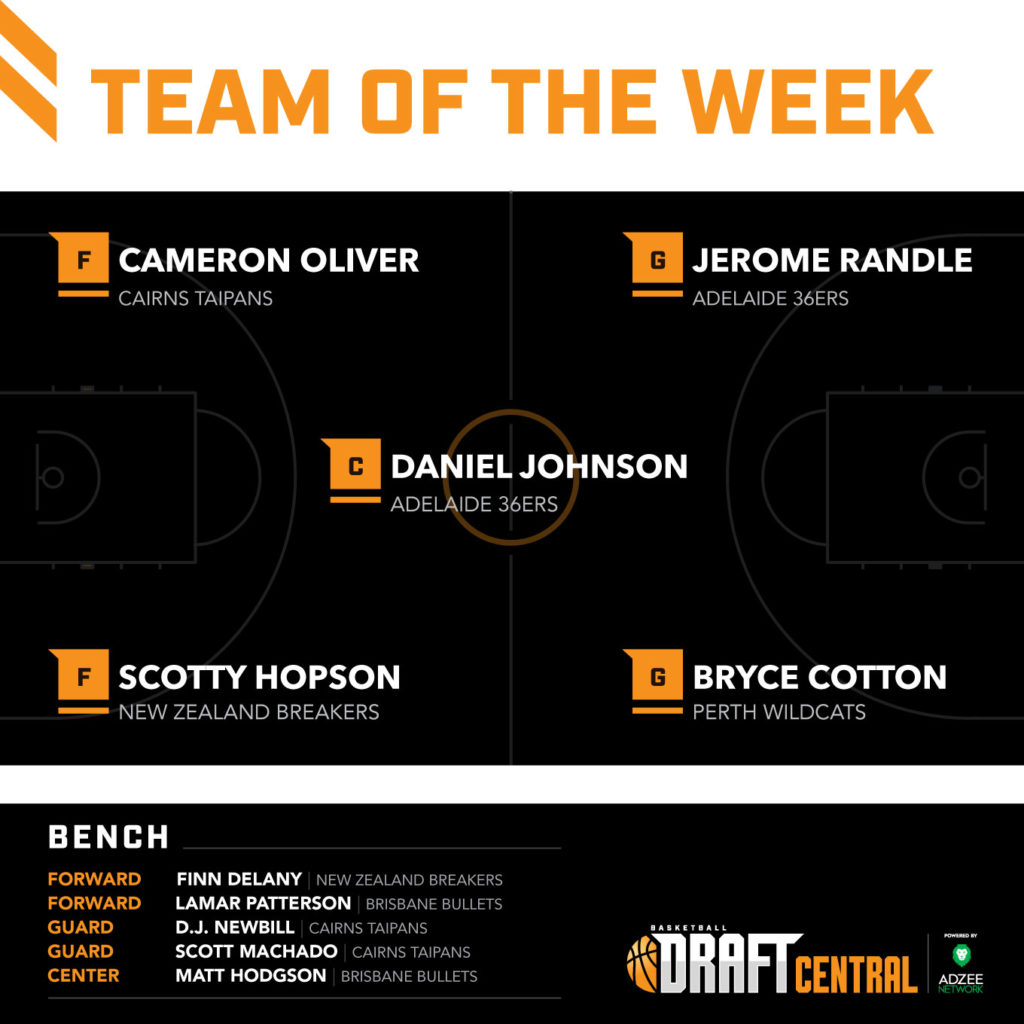 JUST five of the nine National Basketball League (NBL) teams were represented in the Round 16 Draft Central Team of the Week following some strong performances from certain sides. Cairns Taipans had a round-high three players in our 10-player team, while New Zealand Breakers, Brisbane Bullets and Adelaide 36ers all had two players each. Perth Wildcats was the only other side to record a player in the Team of the Week, with Sydney Kings, Melbourne United, South East Melbourne Phoenix and Illawarra Hawks not having a player this week.

The Taipans had just the one player in the starting side, with Cameron Oliver‘s massive game of 24 points, 15 rebounds, one assist and one block earning him a place, shooting at 60 per cent from the floor. He was joined in the team by guards, D.J. Newbill and Scott Machado who both put up impressive numbers in Cairns’ win. A team that had two players in the starting side was Adelaide 36ers, with Jerome Randle one rebound away from a triple double thanks to numbers of 21 points, 10 assists and nine rebounds, and given he shot at 29.2 per cent from the floor, it could have been even more. He is joined in the side by a player who otherwise would have been applauded as the standout for the week in center Daniel Johnson who smashed his way to 38 points, eight rebounds and two assists.

Perth Wildcats star, Bryce Cotton makes another appearance in the Team of the Week following his 25 points, seven assists and three rebounds on the weekend, joined in the starting side by New Zealand’s in-form Scotty Hopson who put up an average of 26.0 points, 7.5 rebounds, 3.5 assists and a steal and a block over the Breakers’ two games. He and teammate Finn Delany who made the bench, are the only representatives from Round 16 who played two games. Rounding out the bench are a couple of Brisbane Bullets in center Matt Hodgson and forward Lamar Patterson who recorded impressive numbers in Brisbane’s win. Those who came close to making it but just missed out were Sydney trio, Casper Ware, Jae’Sean Tate and Xavier Cooks, South East Melbourne’s John Roberson, New Zealand’s Robert Loe, Perth’s Majok Majok and Melbourne’s Shawn Long.