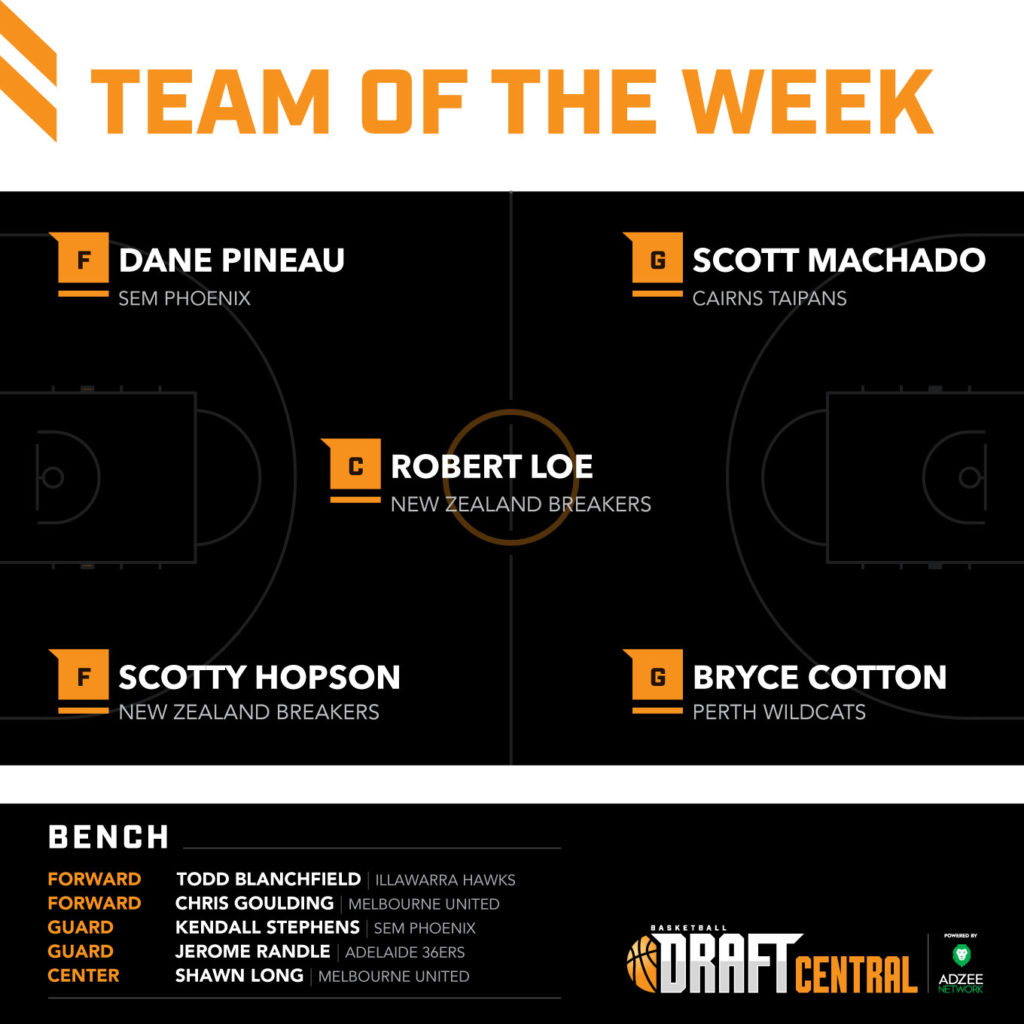 WHILE Round 15 came to an end, fans were curious to see what the finals picture would look like and start to gather an idea of who was most likely to book themselves a post season berth. But, as has been the trend for most of this season, the fans will need to wait a little longer to see how the cards will fall, as still only two games separate fourth and eighth position on the ladder after an exciting weekend hoops with standout performances. Here’s Draft Central’s Team of the Week for Round 15.

New Zealand’s two losses over the weekend was a major setback for the team, as they dropped from fifth in the standings, back down to eighth once again. Despite the losses that occurred, the duo of big-man Robert Loe who came to play against the Taipans and the consistent all-around play of teammate Scotty Hopson made a statement, enough to earn two of the starting five spots this week. Loe kept his side within striking distance for 40 minutes, going 10 for 16 from the field, racking up 24 points along with a couple of daggers from three-point range. He also collected seven rebounds and a couple of blocks in the process. Although Hopson was streaky through both of his games he had an impact across the board, averaging 16 points, seven assists and 5.5 rebounds. But despite the monumental efforts of both players, the Breakers have fallen back to eighth, a position they have been in for the majority of the season.

Across the ditch in Melbourne, a hard-fought win by the Phoenix against the Hawks has gone a long distance in maintaining the new team’s playoff aspirations. The main contributing factors for the win fell to Dane Pineau who for the second time in NBL history, recording 19 rebounds in back-to-back games gifting him a place as a starter in the Team of the Week. The first time since Mark Bradtke in 2002. Secondly, Kendall Stephens who had failed to find his form prior to Round 15, especially after nursing a month-long ankle injury, came out in a big way with 20 points and six rebounds as he drilled two late three-pointers to polish off the Hawks.

The last duo to qualify as standout performers over the weekend, came out of the Phoenix’s cross-town rivals, Melbourne United, as Shawn Long and Chris Goulding made the bench line-up for their weekend performances against the 36ers. For Long, it was a mammoth effort on the boards. Whilst tallying 16 points in Saturday night’s contest, the center compiled 14 rebounds by the final buzzer, as he has done throughout most of the year. For Goulding, it was a three-point party. The veteran shooting-guard went on to knock down six of his eleven three-point attempts as well as six free-throws, rounding out a stellar night from the field, finishing with 26 points.

Rounding out the Team of the Week’s starting five, were two of the highest performing guards in the league. The Taipans’ captain in Scott Machado and Perth’s deadeye ball-handler in Bryce Cotton. Machado’s efficient weekend was enough to secure fourth spot in the standings for another week, following off games of 29 and 16 points against New Zealand and Sydney. Machado averaged 4.5 assists and 6.5 rebounds across the weekend. Cotton’s demolition job of the Hawks was another indicator of an NBL All-First Team level season. The American was amongst the leaders in virtually every category with 23 points, four rebounds, six assists and three steals as the Wildcats continue to pursue the Kings for their top-spot.

Last but certainly not least, Adelaide’s Jerome Randle sat between the likes of Machado and Cotton within this week’s top performers, as his side toppled Melbourne United to hand them their third loss in four games. Randle’s 23 points and four dimes rounded out the Team of the Week bench’s backcourt next to Stephens, as the 36ers win put them half a game behind United in fifth place. To conclude this week’s squad, with two elite performances was Hawks forward Todd Blanchfield, who averaged 20.5 points over the weekend. This included an exemplary performance against Perth where the forward garnered 26 points and eight rebounds in 36 minutes of play finalising this week’s frontcourt.