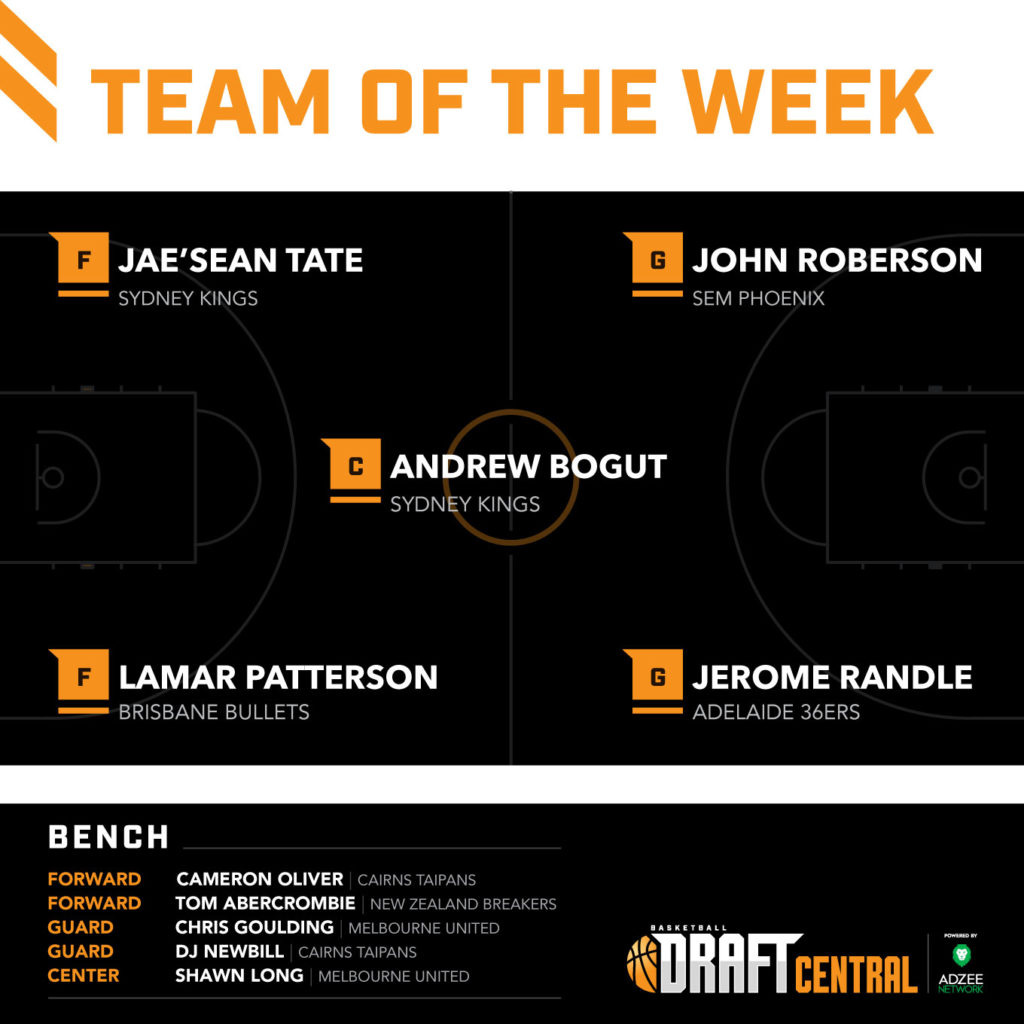 AFTER a big round of action, it is no surprise that a host of Sydney Kings players made this week’s Draft Central Team of the Week. There were some shock losses and unexpected wins, showcasing just how much a season can turn around with a couple of strong performances from key players across the court. The Wildcats failed to have any one in the side this week after a disappointing loss while the Adelaide 36ers got some recognition for a hard fought win.

Lamar Patterson left his mark once again on the competition in his second game of the round. He was the main catalyst for the Bullets, pushing his side over the edge to claim a 13-point win over the second placed Wildcats. Despite a quieter game by his lofty standards earlier in the round with 16 points, four rebounds and six assists, Patterson knocked back 35 points in his outing against Perth to prove how much of a barometer he is for his side.

Adelaide 36ers livewire Jerome Randle was up to his usual tricks, hitting the scoreboard with ease and causing havoc for opposition teams. Randle showcased his hot hand in his first game of the round, collecting 24 points despite losing and while he did not up the ante in the second, he still managed 19 points. South East Melbourne Phoenix guard, John Roberson was electric despite the loss posting a whopping 31 points along with eight assists highlighting his class off the boards and ability to hit the scoreboard.

It is hard to look past the performance of former NBA player and Aussie great Andrew Bogut who once again reigned supreme in his sides victory. Bogut put in the hard yards both offensively and defensively to come up with the goods in the form of a double-double to finish with 13 points and 10 rebounds. He also managed two blocks while teammate Jae’Sean Tate was also solid, notching up one block, 20 points and seven rebounds in a comprehensive performance.

DJ Newbill earned Team of the Week honours albeit on the bench after a solid performance for the Taipans in Round 14 posting 28 points in his sides narrow win over Brisbane. Fellow Taipan, Cameron Oliver also worked his way onto the bench thanks to a strong showing knocking back 21 points and 12 rebounds to notch up a double-double. He was a real presence across the court as was Melbourne United’s Shawn Long who nailed 17 points and collected seven rebounds along with two steals highlighting his defensive skillset. Joining Long on the bench is teammate Chris Goulding who took control in the offensive half with a team-high 21 points to get his side over the line. Tom Abercrombie rounds out the bench for Round 14’s Team of the Week thanks to his hot hand sinking 24 points.