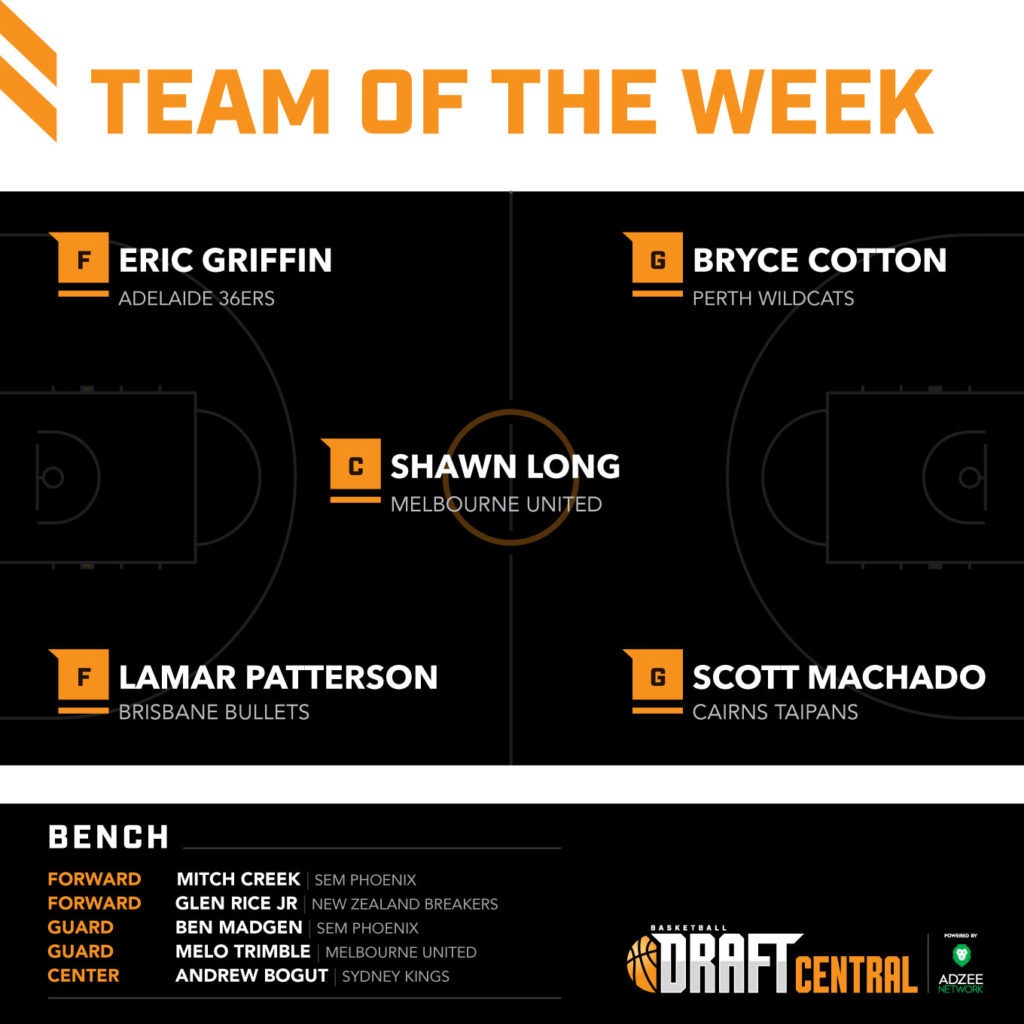 IN a weekend of high intensity and huge individual scores in the National Basketball League (NBL), it was difficult to determine a Draft Central NBL Team of the Week for Round 10. In the end, eight of the nine teams were represented, with Melbourne United and South East Melbourne Phoenix both having two members in the team, while cellar dwellers, Illawarra Hawks were the only side without a player making the final 10.

Shawn Long‘s remarkable season continued with 34 points and 15 rebounds, shooting at 71.4 per cent from the field in his standalone game against Adelaide 36ers on the weekend. He along with teammate Melo Trimble were the clear standouts for United, while for Adelaide, Eric Griffin was just as dominant across the court, picking up 34 points, nine rebounds, three steals, two assists and two blocks with a field goal shooting percentage of 78.6. The other forward in our starting side is a huge Most Valuable Player (MVP) contender and our Draft Central Medal leader, Lamar Patterson. The Brisbane Bullets big man helped himself to 27.5 points, 4.0 rebounds, 6.0 assists and 1.5 steals across two games.

It was no surprise to see the top guard of the weekend, with Perth Wildcats’ Bryce Cotton having another stellar weekend. Cotton averaged 26.5 points, 7.0 rebounds and 3.5 assists in the Wildcats’ back-to-back wins. He was joined in the starting team by Cairns Taipans’ Scott Machado who finished with 21.5 points, 5.0 rebounds, 8.0 assists and 2.0 steals from the Taipans’ two wins. Looking to the bench, the Phoenix had a couple of players with Ben Madgen and Mitch Creek both making the side. Also in the side was Team of the Week regular, Andrew Bogut, while the final spot was taken up by the controversial Glen Rice Jr. While his off-court antics led to him having his contract terminated, he went out with a bang picking up a double-double and almost a triple-double in one of the games of the year for the New Zealand Breakers.

As with every week there were some seriously unlucky omissions, but such was the tight competition in Round 10. Those in contention for a spot were Cairns trio D.J. Newbill, Cameron Oliver and Matt Hodgson, New Zealand duo Corey Webster and Brandon Ashley, Perth trio Terrico White, Dario Hunt and Nick Kay, Sydney guard Casper Ware and Illawarra’s Sunday Dech.