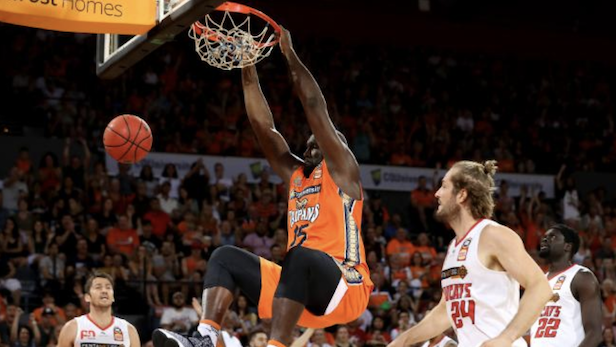 WITH the series at one game apiece for two of the highest scoring offences in the league, Game 3 of the Wildcats/Taipans series goes back to RAC Arena on Thursday night and the Cotton/Machado MVP conversation can finally be laid to rest for this season.

The opening game of the series went Perth’s way by a single point off the back of a 43-point exhibition provided by Bryce Cotton, in front of more than 13,000 screaming fans layered in red clothing. The following game at the Cairns Convention Centre, however, was one that was efficiently and diligently handled by the Taipans, as a 30-16 first quarter by the home side, was enough to keep the Wildcats at bay for the remaining three quarters, leading to an 11 point victory for the Snakes.

With the result of this series to be determined later tonight, there are a number of things each side needs to do if they are to gain any significant edge throughout the 40 minutes of basketball.

If we look at the Wildcats first, the main factor in anything the defending champions do, is decided by the performance of their league MVP in Cotton. Their star import guard shot the lights out in Game 1, going 14 of 25 from the field, while also accumulating 10 made three-pointers in the process. The fact that the Wildcats live and die by Cotton’s sword was further proven in Game 2 up in Cairns, where Cotton’s stat line was a complete shell of his previous game’s, going five from 12 from the field, resulting in only 11 points. This stark contrast in points and performances outlines that Perth’s number one concern going into the deciding game of the series, will be their reliance on Cotton.

While Cotton is Perth’s number one producer on the floor, it is also important to remember that another member on the Wildcats’ squad is a member of this season’s All-NBL First Team. This individual being Nick Kay. Kay, averaged over 15 points, 7.6 rebounds and more than three assists throughout the NBL season, has often been touted as the league’s most productive work horse. Kay’s output come Game 3, will decide how effective Cotton can perform, which in turn would affect the entire squad as a result.

Looking to the team that has its mind set on spoiling the party for all of Western Australia, the Cairns Taipans are starting to hone in on their franchise’s first NBL title, and with one more win, they could have one hand on this year’s hardware.

In terms of what the Taipans need to do to make an away win at RAC Arena a reality, does not rely on the performance of a single player. Mike Kelly’s playmaking schemes throughout the season have been based on a five-man offence and defence. With this style of play by the Taipans, the majority of their ball flow goes through their star guard in Scott Machado. Machado who has proven himself one of the league’s top play makers given he averages 16 points and 7.9 assists per game following the regular season, the way he controls the game’s tempo sets him apart from his peers in the competition. However, while Machado’s numbers were high in their Game 1 loss and low in his team’s Game 2 win, his ability to move the ball on offence on a consistent basis makes his weapons around him more effective against an inconsistent Wildcats defence as shown in Game 2.

While players like Marco Djeric, Nathan Jawai, Kouat Noi and Jarrod Kenny are all able to be utilised in their own ways against Perth’s defence, the most impact for the Taipans depends on the outputs of Dj Newbill (18.8 points, 3.1 assists and 3 rebounds) and Cameron Oliver (17 points and 9.1 rebounds). It can be assured that both these stars will look to make an impact on Thursday night, but will the size of Perth’s front-court be too much for Cairns’ “big three”.