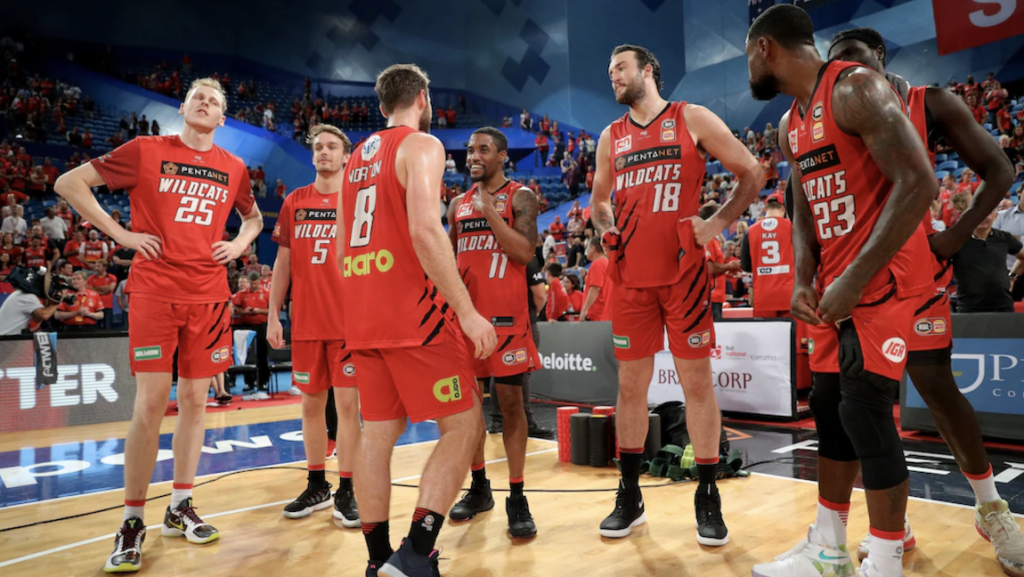 IN the final instalment of the NBL season reviews by Draft Central, we look at the journey of the Perth Wildcats’ 2020 season and the rather unfortunate way that they would secure their fourth title in five seasons and their fifth in seven.

From the beginning, the kitchen sink was thrown at the Wildcats as they faced the team they beat in last season’s Grand Final series, Melbourne United. In what was the perfect way to kick off the 2020 season in front of packed RAC Arena, both teams were ready to get their seasons off on the right foot.

With both Bryce Cotton and Melo Trimble claiming their stake as two of the best guards in the league, they would lead their squads through four quarters of tightly contested basketball. But, thanks to a strong final quarter by the Wildcats, a single point would be all that separated the two sides on the day, as the Wildcats would squeeze by with a 94-93 victory starting off their campaign with a favourable result. Trevor Gleeson’s team would continue their good run of form with four victories in their next five contests, with their first blunder of the season being against a new and improved Cairns Taipans, that was getting ready to take the competition by storm.

Around came November, where Perth would struggle throughout a week and a half losing two out of three contests, going down to Brisbane at the Armoury and getting routed by 19 points away in Sydney, the only loss the Wildcats would endure from the Kings throughout the whole season. Reaching the halfway point of the season with a record of nine wins and five losses, the Wildcats sat rather contently in second place, as it was clear that they remained one of the top two contenders in the League. Nonetheless, the Wildcats needed to avoid getting complacent, as just below them a major storm was brewing in the mid-table logjam, as six different clubs were all vying for a postseason berth, with just a game and a half separating third and eighth position in the standings.

While Perth never really produced any substantial winning streaks on their way past Round 20, it was their ability to keep their losses to a minimal over the span of the entire season. During the second half of Perth’s season, they would string together three victories in a row on three different occasions, keeping them out of reach of the jostling teams below. After finishing one win better than compared to last season, Perth had established itself as one of the League’s best offensive sides, averaging more than 90 points per contest, led by their superior backcourt and solid front court. So, it was only fitting that they would square off with the Taipans in the semi-final round of the playoffs, given they were a very similar style of team.

Following the regular season, it was announced that Bryce Cotton of the Wildcats would be awarded the NBL’s Most Valuable Player with Cairns’ guard Scott Machado falling eight votes short of Cotton. It wasn’t all doom and gloom for Machado, as he would be awarded the title of Fans’ MVP. But individual accolades for these players pale in comparison in what is the ultimate goal for any team sport, that being the championship. While Cotton had already received two titles in his time at Perth, Machado was looking to earn his first in his debut season.

Game One was as expected for those who attended. An offensive showdown would go down at RAC Arena with both teams blowing each other out of the water in each of the opening two quarters. With the second half being a much closer affair, Cotton would undertake most of his side’s scoring duties as he would have a career best night, piling it on for 42 points and six assists in an overtime classic and breaking the hearts of Taipans fans looking to wrap up the series in two games.

Keen to force a Game Three, Cairns’ head coach Mike Kelly made a point of limiting Perth’s weapons. Cotton and Nicholas Kay, the Wildcats’ two leading point-getters were held to just 21 points. Meanwhile the Taipans’ ‘big three’ made an impact in front of their home crowd accounting for 41 of Cairns’ 85 points, as they went on to tie the series up winning by 11 on the night. With Cairns tying the series up for a deciding Game Three, the more than 10,000 people that witnessed the match held a slight nervousness as Gleeson and his coaching staff had yet to find a way to weaken the combo of Machado, Dj Newbill and Cameron Oliver.

With both sides neck and neck for every quarter, the contest remained one that could have gone either way at any stage, but Perth had figured out a way to limit the production of Newbill as he would only manage six points on the night. However, it was Cotton that wasn’t making his usual impact either, which meant someone needed to step up when it counted. Terrico White, the second part of Perth’s backcourt made his statement game in the series, racking up 26 points and four rebounds. Further aided by Kay’s 24 points, the Wildcats would squeeze out a semi-final clinching Game Three triumph by 11 points once again, 93-82 and the right to defend their title against the Sydney Kings.

The Kings were for the first time in a Grand Final series since the 2008 NBL season and had not won a series since 2005, which made home-court advantage much more important. However, history was made that was not in control of either of the teams, therefore cutting short a series that was destined for at least a Game Four.

With more that 11,500 people packed into Qudos Bank Arena, Game One was fully loaded to be a big game. Both sides trading quarters seemed to be the trend of the opening contest of the series and most people knew that the game wouldn’t be decided until the final stages of regulation. This would come to fruition, as with only a couple minutes remaining, a massive three-point bomb by Damian Martin would put the Wildcats up by three, which was followed up by Cotton’s two made free throws. These actions would prove to be enough, as the Wildcats would steal Game One on the road.

It was Game Two that the new COVID-19 restrictions had been enforced and this seemed to influence the concept of home court advantage, as Sydney came out strong in front of a silent RAC Arena, winning three out of four quarters in a bid to tie the series up. While Cotton’s 27 points was valuable, it was not enough to get the Wildcats over the line, as they went down 83-97 and were now heading back to Sydney.

Both teams prepared themselves for any other series game not knowing that it would be the deciding game, as following Game Three, the NBL and both teams would decide to finish the series and end the season following this contest. Nevertheless, Game Three would go ahead as Perth would explode out of the gate with a barrage of opening quarter points, getting out ahead 29-18 after ten minutes of play. This would allow Perth to keep Sydney at arm’s length as they would secure a relatively convincing 111-96 victory, putting them up 2-1 in the series.

While the series would be cut short and the Wildcats would collect their fourth title in five years and cement themselves as one of the greatest franchises ever, there’s perhaps no other team more disappointed than Perth at how this season ended, so perhaps another title run next season would convince the franchise.

The pride of WA

Up there with amongst the best point guards in the League’s history, Bryce Cotton further added to that as he would lead his side to yet another NBL title. In the process he would also collect a third title of his own, a second NBL finals MVP, a second league MVP, a third All-NBL First Team selection and a third scoring title. On the season he would average 22.5 points, 3.7 assists and almost four rebounds a game shooting at 42 per cent from the field. However, the 27-year-old will look to make another title run next season given the circumstances surrounding this season’s end.

Completing his second season, Nick Kay proved his mettle once again providing lots of production in numerous statistical categories. This would secure him a second title and a second All-NBL First-Team selection, alongside Cotton as he remained the Wildcats’ constant in their long and arduous 2020 season. Kay would finish the season with a steady 15 points per game while facilitating three assists every time out on the offensive end. Meanwhile, he would gather an awesome 7.6 rebounds every contest which paved the way for numerous double doubles throughout the season.

Like his counterpart Will Weaver, Gleeson was devastated by the series ending in the fashion that it did, but he still remains extremely proud of the efforts his side made during the season, as he reflected in a statement by the Wildcats.

“We worked hard for this moment, earned this moment, and to have the opportunity torn away from us is really disappointing. “We were the best team throughout the Grand Final Series.”