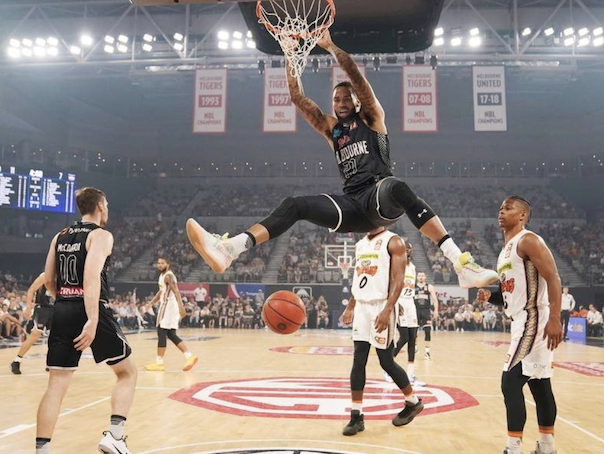 HAVING made the postseason the last two seasons, Dean Vickerman’s Melbourne United was keen to make it three in a row, especially after finishing runners-up to the Perth Wildcats in 2019. But United lacked the pieces to really make a hard championship push throughout the NBL 2020 season, despite ultimately making the final four. Although for some, it was the unlikely heroes that provided the biggest sparks to a team that was quite lucky to make the postseason.

By the skin of their teeth

It was evident that United needed to make their presence known, as they were matched up with league newcomers, the South East Melbourne Phoenix. It was apparent early that the League’s new kids on the block were keen to make waves in the big leagues, as the Phoenix put on a scoring masterclass in the first ever ‘Throwdown’, knocking off United with a hard-fought three-point victory at Melbourne Arena. The misstep of game one of the season kicked off the slowest start to a United campaign in almost a decade, as Melbourne would lose back-to-back games to the reigning premiers and old foes, Perth Wildcats.

Melbourne’s first victory of the 2020 season wouldn’t come until game four, as they edged out a resurging Breakers side thanks to United’s Chris Goulding, Melo Trimble and Shawn Long’s 24 points each in a dominant performance from the trio. United’s 1-4 start to the season was one of the NBL’s biggest talking points in terms of performances, as many basketball punters picked United to be a top two or three team by season’s end.

Following the realisation of their team’s performance, the Black and White would start to pick up steam, kicking off a sizeable six-game winning streak, thereby erasing their horrifying start to the regular season, sitting with a record of seven wins and four losses prior to their eventual loss to the Taipans five days later. An 8-6 record would be the summary of United’s tumultuous first half of the season, in what was starting to be an exciting finish and the start of what would become known as the ‘mid-table logjam’.

Like many other mid-standings teams, Melbourne would undergo both winning and losing streaks in what would be a slow second half of the season, much like their first with a five win and seven loss start with the final round of the season still to play. For United to make the final four, they needed to win both of their remaining games with both contests being at Melbourne Arena.

The first of their two games were against the Taipans, a team that had made dramatic improvements since their previous season, and was also already locked in to finish third, following the remaining games of the season. After a runaway 31-16 fourth quarter and a 5-12 night from behind the arc from Goulding (23 points and four assists), Melbourne would take out the contest 99-83, setting the team up for a must-win final game three days later against the Phoenix.

With the Bullets and the Breakers a win ahead of United, but with Melbourne having a higher percentage, a victory was all that was needed for Vickerman’s men, and unlike their first matchup in the ‘Throwdown’, United would stick to their strengths. Thanks to four players scoring 18 or more points, strong first and last quarters would help United dominate their final game of the season, toppling the Phoenix 109-90, and earning Melbourne their third straight finals appearance.

All season long, Sydney’s Casper Ware had been relentless against his old club, controlling the floor at both ends of the floor against Melbourne. However, United would buck that trend as they would inject tactics to limit Ware’s output in their semi-final series against the Kings, as evidenced in Game One. Ware would go 3-14 from the field scoring a mere seven points. But, Will Weaver’s guys would share the load as Jae’Sean Tate, Xavier Cooks and Brad Newley would combine for 53 points, stealing the opening game of the series, 86-80.

When it comes to a three-game series, losing that first game can be exponentially demoralising, as it means it’s a team’s final chance until they are eliminated. But no one expected Melbourne United to do what they would do in their Game Two outing. Over the second and third quarters of Game Two, a 38-0 scoring run would ensue for Melbourne, ultimately leading to an astonishing 50-point lead at one stage. This, coupled with six different individuals reaching double-digit scoring totals and Shawn Long’s impressive 26 point and 11 rebound double-double, would lead to a 125-80 demolition job of this season’s minor premiers, setting the series up for a decisive Game Three back in Sydney.

Game Three of the Kings/United semi-final series would reach its summit in an exciting deciding third game. A strong finish to the first half would have United up by five at the main break. The Kings, however, would crawl back into the fold, going basket for basket with last year’s runners-up until the final two minutes, as Kings’ captain and leader Kevin Lisch would nail a dagger from deep to put the Kings up by two with two minutes remaining. Following Lisch’s three, Tate would drive down the lane to extend his side’s lead by four with a minute and a half left, allowing the Kings to hold on by two (89-87) and end Melbourne’s title run at the end of an enduring series.

Sydney would go onto their team’s first Grand Final appearance since 2008.

United to the end

Many had thought that the peak of Chris Goulding’s career had finished three seasons ago when he last averaged 17 points per game. The following two seasons, Goulding had averaged just over 14 points per game which left many fans in limbo, as to whether or not the 31-year-old would remain an integral part of the Melbourne United basketball club.

He would go on to make a statement in regard to this point, averaging more than 17 and a half points per game (the most productive he has been since the 2015-16 NBL season). He would also undertake 31.5 minute per game, a three-and-a-half-minute increase compared to last season. Due to these facts, it is safe to say that the Boomer selectee might still be one of the League’s best shooters, and one that a team could still be based around.

When ex-Taipans guard Melo Trimble made his way down to Victoria, Melbourne had that key piece in their backcourt that they needed due to the missing Casey Prather. Trimble for the most part, was consistently putting up 20-point games and a boatload of assists to come along with it. Despite that statistical impact, Trimble would go through struggling times late in the season going through a string of games without making double-digits. Nevertheless, Trimble would regain his form late in the season finishing his second season in the NBL on a high note. He would go on to average 19.4 points per game along with 4.8 assists and 3.4 rebounds.

While United had plenty of weapons in their backcourt, there remained few in their frontcourt. This meant that the load Shawn Long had to carry was immense throughout the whole season. Long would take on the task with tremendous consistency, earning himself the title ‘Mr. Double-Double’, for his statistical dominance on the scoreboard and the glass. Long would secure 18.1 points per game, finishing amongst the League’s top twenty. He would also claim the rebounding title for the season, leading the entire League in rebounds, with 9.4 per game.

Despite being rather fragmented as a group for the majority of the season, Vickerman has stated how proud he was of his group and the way they came together, especially in the last portion of their 2020 journey.

Following their elimination, Vickerman voiced his commendation of his group post-game and their resilience in the face of adversity.

“I’m really proud of our group over the last month, and the way that we came together. “We kind of looked at yesterday and said that this was our seventh elimination game and we won five of them,” talking back to their run to the final late in the season. “I loved our mindset and the way we stuck together really well and yeah I’m really proud of them.”