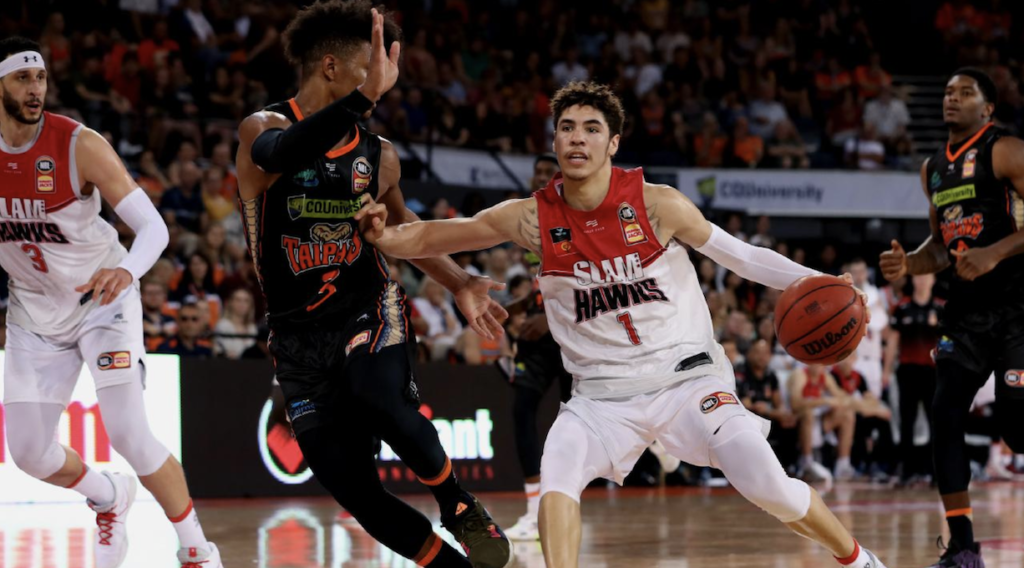 THE Illawarra Hawks came into the NBL season with high aspirations, following a disappointing yet somewhat successful 2018-19 season. Finishing seventh out of eight teams, it looked a little worse for wear. But, the fact remained that the Hawks were only two wins off a .500 record, with 12 wins from 28 matches. Nevertheless, with the acquisitions of a couple of major signings, meant the people of Illawarra had something to look forward to for NBL20.

Since 2017, the NBL has implemented the ‘Next Stars’ program, where aspiring players could develop in the NBL until they are ready to enter into the NBA Draft, rather than go through the college system that many athletes have decided to go through. Prior to the season, it was announced that up and coming prospect, LaMelo Ball, would be the next recruit to make their way down under. Following his signing to the Illawarra Hawks, the young headliner immediately started to turn heads following his Round 1 performance against the Bullets, collecting 12 points, eight rebounds and four assists. This kind of stat line became a weekly occurrence for the 18-year-old, as throughout his 12 games, the Californian averaged 17 points, seven assists and seven and a half rebounds per game. Which for a guard his age and with his style, caused plenty of interest and most importantly was unseen in the NBL. The import was set to miss four weeks due to a bruised foot that occurred in early December during a practice session. Following six weeks out of the game, Ball took to social media to announce he would miss the remainder of the season to focus on recovery in preparation for next year’s NBA draft, finishing his season in partially anti-climactic fashion.

With more than a decade of experience in the NBA, the Illawarra Hawks were set to base their entire offence around former Most Improved Player in the NBA, Aaron Brooks. Following the signing of Brooks, the 35-year-old averaged 17.9 points per game and over four assists in seven outings. Despite winning only one of their opening seven match-ups, the worst-case scenario came to fruition for Brooks, when the guard from Seattle tore his Achilles tendon attempting to block a Bryce Cotton three-pointer. Immediately following this, it was announced that Brooks would miss out on the remainder of the season, compounding the bad luck that the Hawks would go through in regard to their players’ health.

One of Illawarra’s weaknesses the season prior, was their lack of inside presence, which the Hawks attempted to remedy through the signing of one of their two free agency acquisitions. Josh Boone, who had spent two and a half season with Melbourne, had reached the NBL finals series twice prior to NBL 20, winning the chip in 2017/18. Boone became one the Hawks most prominent contributors throughout the season, finishing with more than eight points and 5.8 rebounds a game in 18 minutes per contest.

Seasoned veteran and the second of Illawarra’s free-agency signings, Todd Blanchfield was acquired to score from all parts of the court for Illawarra and standing at 200cm tall with the ability to beat most big men off the dribble, Blanchfield provided the Hawks with numerous man of the match performances. Averaging over 13 points per game and close to four rebounds at a 42 per cent clip, Blanchfield proved to be one of Illawarra’s most utilised player playing more than 30 minutes a game throughout the season.

Journey to The Spoon

Illawarra’s objective to move upwards in the standings this season did not look likely following the first portion of the season as the Hawks only won a single game in their first eight contests, solidifying them in bottom position with a big chunk of the season still to play.

Following their rough start to the season, which saw the season ending injury of Brooks against the Wildcats, the Hawks went on to beat the Taipans for the second time, which was significant given the level of play the Taipans played at for the rest of the season. One of the perks that came with the signing of Ball was the amount of attention that the young star garnered wherever he played. Come November 17, the Hawks travelled to Qudos Bank Arena to face the top-seeded Kings in front of an NBL record-breaking crowd of 17,514 people. Going down by just five points in what was considered a very competitive contest for the Hawks, and a day that those who played in that game should remember for the rest of their lives.

While a major highlight for Hawks players would be playing in that record-breaking game for attendance, they would also manage to topple the minor-premier, Sydney Kings the next time out on their home floor in Wollongong, edging out the purple and gold 85-80 later in Round 13.

The rest of the season was rather challenging for Illawarra, as throughout the season, the Hawks’ record was consistently littered with lengthy losing streaks including an eight-game streak to finish their season, spanning January 1 to February 14, concluding their season with a record of five wins and 23 losses. The Hawks had four less wins than the next highest team, South-East Melbourne Phoenix, and unfortunately it was five less wins compared to last season.

Despite their rather unsuccessful season finishing at the bottom of the table, Illawarra Hawks owners Simon and Wendy Stratford said in a media release that they were proud of the club as a whole and were looking forward to a promising future.

“Although it was a tough season on the court, we have made huge strides building the club and the Illawarra Hawks brand, to be a strong force in the NBL,” they said.

The pair would go on to praise Illawarra’s young secondary unit at their disposal following the various injuries the Hawks would have to deal with. Players praised included Angus Glover, Sam Froling and Sunday Dech.

The up and comers

One of Illawarra’s stand out rookies, Angus Glover proved his worth late in the season following the exit of fellow teammate Ball. Glover’s minutes at the start of the season increased significantly as a result of Ball’s exit from the league, going from below ten minutes a game to averaging over twenty in the second half of the season. Glover’s season stat line would provide him with 5.2 points per game, as well as 2.3 rebounds with 1.2 assists. He also maintained a 44 per cent field goal efficiency throughout the season, which would in turn earn the 21-year-old an Australian Boomers selection for the 2021 Asia Cup qualifiers alongside fellow Hawks teammates Daniel Grida, Sam Froling, Blanchfield and Dech.

When 20-year-old Sam Froling came into the NBL at the start of this season, many did not expect his progression to happen so quickly, and as a result the youngster is gearing up for a potentially special second season in the NBL. Like Glover, minutes came in small amounts leading into the new season. However, more and more responsibility was placed on the rookie, culminating in a single game where Froling played 23 minutes against an in-form Taipans unit, scoring 13 points and grabbing five rebounds catching the eye of international recruiters in the process. Froling finished his season averaging six points and almost three and a half rebounds per game, whilst maintaining a 46 per cent clip from the field in a successful first year of professional basketball.

Illawarra rounded out their young core group of players when they signed 26-year-old Dech, who coupled up with fellow swingman Blanchfield to help facilitate the Hawks offence. Excluding Brooks and Ball, Dech became Illawarra’s second leading scorer on the roster averaging over nine points a game, while averaging 23 minutes of play per game developing into one of the league’s most improved players.

“Whilst the record is not good, success is measured in different ways,” Flinn said post-game against the Kings in the final round of the NBL 20 season. “Obviously we’re not happy with where we’re at in terms of where we finished on the ladder, but we are quite happy with the forward progress we’re making and the trajectory of the club.”

It is safe to say that Illawarra was easily the worst performing team throughout this season, however it brings up many questions in relation to next season. It has been a number of years since so many players from the same club have been selected to the Australian Boomers squad, and with these selected Hawks’ players still currently being of a younger age, you might just need to pay attention to how Illawarra’s squad is going to shake up for 2021, and whether they might be touted as playoff contenders.