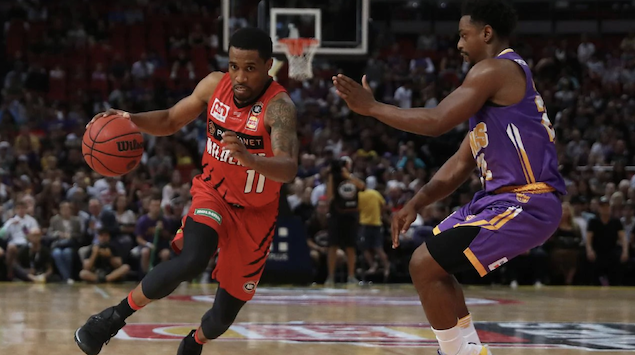 GAME 1 of this epic clash lived up to all the hype and then some. Sydney’s mere two point loss to Perth was soul crushing, yet extremely exciting. Coming off another two-point nail-biter in their victory against Melbourne the week before, the Kings would be mentally exhausted, as the Wildcats won by the skin of their teeth. Game 1 has set a high bar for fans expectations for Game 2, where Perth has a chance to take a 2-0 lead in the series.

Perth’s win on the road against Sydney was monumental for the traveling side considering the Kings have only lost two games at home all season. It was Bryce Cotton’s game from start to finish proving exactly why he is the Most Valuable Player (MVP) of the league capturing a jaw dropping 32 points. Perth got the majority of their buckets from the mid-range, exploiting Sydney’s drop coverage. Although Sydney held a narrow five point lead at the end of the third, they simply could not put their foot on the throat. But after some crafty three pointers, Perth were right back into it, and eventually came out on top highlighting their grit and determination. If this is even a little glimpse into how Game 2 will play out, the Kings must find a way to lock down Cotton.

Cotton is one of the best scorers in the league, and although the mid-range shot might be the worst analytical shot an opponent can take, Cotton is no ordinary opponent. Sydney must adjust and find a different way to defend that middle pick and roll, or Game 2 could be another long night for the Kings. But losing at home in Game 1 can really damage a team’s confidence heading into the next game away. Especially, when that team was nearly undefeated on their home court. Sydney will be hoping to regroup and address the game plan, starting with Andrew Bogut. The big man whose mere presence spreads fear into opponents struggled to have his usual influence, as Bryce Cotton stockpiled most of his points in the key. But do not be surprised if this actually plays into Sydney’s advantage, as it is widely known Bogut plays best with a chip on his shoulder. The recent ridicule surrounding Bogut’s performance in terms of his aggressiveness and defensive intensity might be the spark the Kings need for Bogut to impose himself once again. But the worst possible thing Sydney could do is let Perth build an early lead. Perth is coming in with the momentum of a victory, which might give them a slight mental edge. If Sydney sees themselves trailing at half, away from home, already a game down, the mental fortitude might just be too much.

Perth holds fortress status heading into the next battle, along with significant veteran leadership. This is something that is highly undervalued but crucial come playoffs. Veterans such as Miles Plumlee, Damian Martin, Jesse Wagstaff know how to rally the troops, and are important pieces built around maximising the most out of Cotten’s abilities. But having the indisputable best player on the court is the best advantage Perth holds over Sydney. While we cannot expect Cotton to have another 32-point night, you can be certain that he will impact the team positively, whether that’s stacking the score sheet or finding open players. If the Kings decide to double team the star, he definitely will find open players.

Sydney Kings’ Casper Ware has struggled to find his rhythm so far in the playoffs, shooting just 1-14 from the field in his recent performance an area he will be hoping to rectify come Game 2.  But if anyone can turn it around it is Ware who has shown before that he can have an immediate impact with his drive to the basket and pressure. With Ware and Cotton going head-to-head in Game 1 the coaches may look to change up the battle in hope to get the best out of their players in particular Ware who struggled to hit the scoreboard. If the Kings can throw Cotton’s game off with their unpredictability it could set them in good stead to claim victory.

Perth might just come out on top, bearing in mind that 26 of the last 28 Game 1 winners have gone on to win the NBL Championship. This should be Perth’s game to win but the defensive settings placed on Cotton and the headspace of Bogut are decisive factors that could swing in any direction. Take in the fact that Perth only won the first match by two, with Ware shooting seven per cent means this game could really go either way.