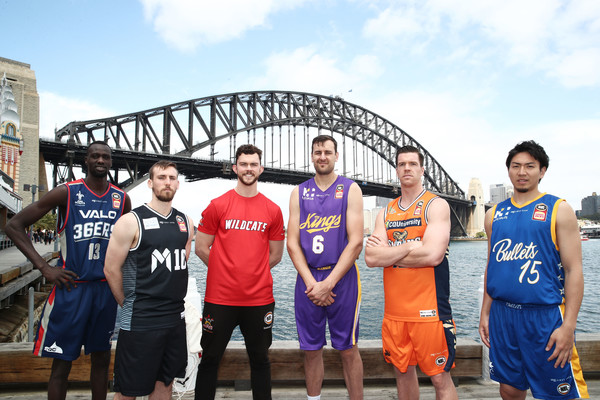 THE 2018/19 National Basketball League (NBL) season is set to be the most exciting yet, with many big names taking to the court. We previewed each team in the lead-up to the highly anticipated season.

The 36ers finished second last season and pushed Melbourne United all the way in the NBL Grand Final. Star, Mitch Creek has earned an NBA contract with the Brooklyn Nets, which will prove to be a big loss for Adelaide.

Three-time club Most Valuable Player (MVP), Daniel Johnson has been named as captain this season after signing a deal that will see him remain at Adelaide until the end of the 2020-21 season. Australian Boomer, Nathan Sobey will be the vice-captain this season. Shooting guard, Brendan Teys has signed on for his sixth season with the Sixers, joining Majok Deng, Anthony Drmic, Adam Doyle, Harry Froling and Ramone Moore who will also stay with Adelaide.

American, Jacob Wiley has been acquired for the 2018/19 season. Wiley has spent some time in the NBA, debuting for the Nets last season and playing for the Dallas Mavericks in the NBA Summer League. Jack McVeigh also joins the Sixers on a three-year deal. McVeigh was a previous captain of the Australian Under 19 team and has been playing for the Cornhuskers at the University of Nebraska.

The Bullets finished on the bottom of the table in the 2017/18 season with nine wins and 19 losses.

They have made an exciting signing for the 2018/19 NBL season, with NBA veteran, Alonzo Gee joining Brisbane on a one year deal. Gee has played over 400 NBA games and has spent time at Washington, San Antonio, Cleveland, Portland, New Orleans and Denver. Japanese shooting guard, Makoto Hiejima has also been recruited by the Bullets and could make a big impact. Hiejima has been playing in the Japanese national team since 2013 and has spent time with the Afshin Sea Horses. The duo join a host of signings, including five-time NBL champion, Mika Vukona and Commonwealth Games Gold medalist, Cameron Gliddon.

Guard, Jason Cadee will stay with the Bullets until the end of the 2020-21 season. This will be his ninth season in the NBL and he will come into the side after a successful Commonwealth Games campaign. Forward, Reuben Te Rangi has also signed on at Brisbane. Te Rangi played for the Tall Blacks at this year’s Commonwealth Games and claimed a bronze medal.

The Cairns Taipans finished sixth last season with 11 wins and 17 losses. With new coach, Mike Kelly at the helm, the Taipans could turn around last season’s form.

Oklahoma City Thunder shooting guard, Devon Hall has been acquired for the 2018/19 season. Hall was selected in Round 2 of the 2018 NBA Draft and spent some time on the court in the summer league, playing five games for the Thunder. Cairns also picked up another American guard in Melo Trimble. Trimble was signed by the Minnesota Timberwolves in the NBA last year, where he then played for the Iowa Wolves in the G-League. After playing for the Taipans in 2013, Mitch Young has returned to the side for the 2018/19 season. Other key signings include Australian Boomer, Lucas Walker and two-time NBL Champion, Jarrod Kenny.

NBL All Australian, Alex Loughton will play his ninth season for Cairns this season. However, the side has lost Cameron Gliddon and Mitch McCarron, with Gliddon heading to Brisbane and McCarron opting to play at Melbourne in the 2018/19 season.

The Hawks have signed two former league MVPs in Brian Conklin and Cedric Jackson. Conklin has been playing in the Liga Nacional de Baloncesto and has been involved in championships in both the French Cup and FIBA Europe Cup. Jackson is a three-time championship player for the New Zealand Breakers and will now have a stint at the Hawks. Point guard, Jordair Jett also joins Illawarra for the 2018/19 season. Jett previously played with the Townsville Crocs and took out both the club MVP award and Defensive Player of the Year. The Hawks have also obtained Melbourne Boomers 2017/18 championship player, David Andersen for the upcoming season. He was a rookie for Illawarra 20 years ago and is now back for the 2018/19 season. Australian Boomer, Todd Blanchfield will also suit up for the Hawks this season.

Melbourne United are the reigning champions of the NBL, finishing first on the ladder with 20 points and eight losses. They defeated Adelaide in a tense finals series and would be raring to go back-to-back in the upcoming season. Head coach, Dean Vickerman will remain at the club until the end of the 2021-22 season.

Point guard, Casper Ware and shooting forward, Chris Goulding have returned for the 2018/19 season. Both were key components of Melbourne’s winning outfit last season and could again dominate the court this season. Dominant centre, Josh Boone has also re-signed for the upcoming season.

American shooting guard/ forward, D.J Kennedy will join United this season. He has played four years of college basketball at St John’s University in New York, so he brings a wealth of experience into the line-up. Australian Boomer, Mitch McCarron has also joined Melbourne on a three-year deal. Former New Zealand Breaker centre, Alex Pledger is another exciting recruit for United. Pledger is a four-time NBL Champion and a Tall Blacks representative.

The Breakers have signed 25 year-old American, Shawn Long. Long previously played with Philadelphia in the NBA on a short-term contract and followed this up with three appearances in the summer league with the 76ers, Houston Rockets and Chicago Bulls. Small forward, Armani Moore and shooting guard, Patrick Richard are two exciting players that will join the side for the 2018/19 season. The Breakers have also acquired Melbourne United duo, Tai Wesley and Majok Majok, which will prove to be two key signings for the club.

Power forward, Finn Delany has re-committed to the Breakers, signing a two-year deal in the off-season. Delany has recently won a bronze medal at the Commonwealth Games. Swingman, Tom Abercrombie and point guard, Shea Ili have also put pen to paper for another season at New Zealand. This takes Abercrombie’s tally to 13 years with the club while Ili is coming off being named the 2017/18 NBL Most Improved Player.

Australian Boomers players, Angus Brandt, Damian Martin and Jesse Wagstaff will all be again playing in Perth for the upcoming season. Wagstaff, Martin and Norton are Commonwealth Games Gold Medallists, which will hold the Wildcats in good stead this season. Reigning NBL MVP, Bryce Cotton will also go around again for Perth after a stellar 2017/18 season.

American, Terrico White has been added to the Wildcats’ roster for the 2018/19 season, and is a former NBA Draft pick. Two-time Perth championship player, Tom Jervis has also signed up for the upcoming season. Jervis has spent two years at Brisbane but is now returning back to his hometown. Australian Boomers power forward, Nick Kay is another key recruit for the Wildcats. The 25 year-old has played 90 NBL games, brining plenty of experience to the Perth line-up. Australian teammate, Mitch Norton also joins the Wildcats after previously playing with the Illawarra Hawks.

Sydney hopes to rectify this through the biggest recruit of the off-season in Andrew Bogut. The Australian centre has had stints in the NBA with Milwaukee, Golden State, Dallas, Cleveland and the Los Angeles Lakers. He is also a championship player with the Warriors. Former Brisbane Bullets forward, Daniel Kickert is another big signing for the club. The Australian Boomers player became the first player in NBL history to shoot over 50% from the field, 40% from the three-point line and 90% from the free-throw line in the 2016/17 season.

Australian Boomers player, Kevin Lisch has re-committed to the club for the 2018/19 season. The two-time NBL MVP will be joined by 2017 MVP, Jerome Randle once again for the upcoming season. Randle averaged 19.8 points, 5.2 assists and 3.2 rebounds per game in the 2017/18 season. Two-time Olympian, Brad Newley and former college basketball player, Dane Pineau have also re-committed for the upcoming season.